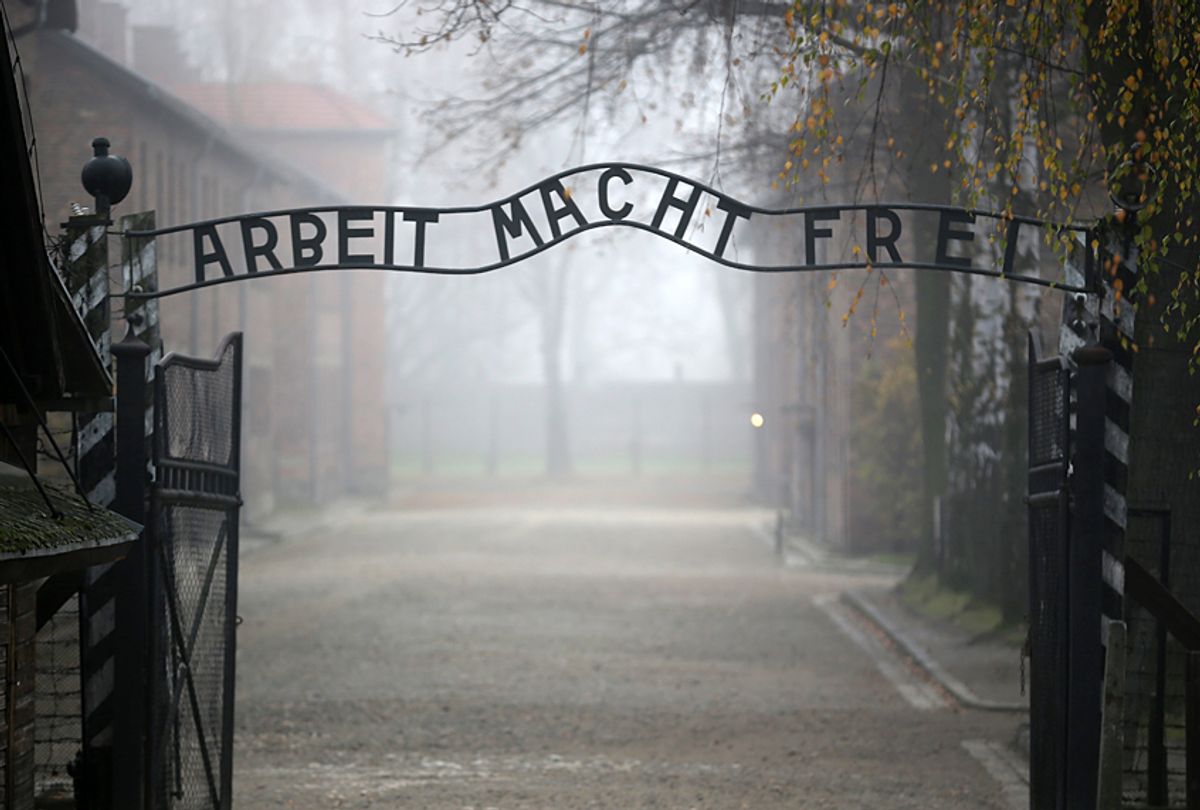 The main gate of the Auschwitz I extermination camp, in Oswiecim, Poland. (Getty/Christopher Furlong)
--

Holocaust remembrance has become a global affair, and its reach constitutes a powerful source of resistance to the mistaken belief that any single state can legislate how the world remembers. The current Polish government, however, is determined to try. It has passed legislation banning claims of Polish complicity in the Holocaust. In an open letter published in multiple outlets on March 19, Poland's Prime Minister Mateusz Morawiecki complained that his country's controversial amendment to its Act on the Institute of Polish Remembrance, lately referred to as Poland's Holocaust law, has been misunderstood. "My government wants to ban accusations of Polish wartime complicity for the sake of honoring history," the letter implores. How does one honor history by outlawing facts?

It would appear that the offending speech at the root of this expansive and poorly defined law is the recurring use of the misleading phrase "Polish death camps" to describe what were, in fact, Nazi death camps built in occupied Poland. The phrase is an inaccuracy that no serious historian endorses. Barack Obama used it in 2012, unleashing a defensive response in Poland that led Obama to write an apology to Poland's then-President Komorowski. The phrase is sloppy and should not be used. Public discourse corrects the record without the help of a ban.

The law is misguided for reasons that many others have enumerated: It is counterfactual; it sets undue boundaries on historical study and public debate; it is an over-reaction with unpredictable consequences. A criticism of one Pole becomes a criticism of all Poles. There is some consistency to this reaction; Poland has long pointed to the heroic rescues of Jews by a small percentage of Poles as evidence of all Poland's virtue, an equally unjustified generalization. Domestically, the law is an attempt by the Law and Justice Party to rewrite Holocaust history in order to pander to right-wing populism.

It is an effort that is doomed to fail.

The international relations disaster that this law has generated demonstrates that no single nation, much less a political party, can dictate Holocaust memory. Furthermore, the efforts to commemorate suffering under the Nazis has often been a matter of grass roots, personal efforts by survivors, their families and supporters, educators and activists to make public what many would like to forget. In an increasingly interlinked world, local efforts and national efforts to remember the Holocaust are subject to thorough international scrutiny. The spread of historical knowledge around the globe becomes a way of holding local memory to account.

Sociologists Daniel Levy and Natan Sznaider have coined the term "cosmopolitan memory" to characterize global cultures of remembrance, with the Holocaust as their prime example. Modern communication such as the internet and digital media are fueling a process whereby representations of the past have become "ripped from their original spatial (i.e. local and national) contexts" ("Holocaust and Memory in the Global Age," p. 26). National myths do not vanish, but they enter a more complex word that challenges their authenticity and diminishes their authority over globally shared collective memory.

That has not always been the case with Holocaust memory. During the Cold War, Holocaust memorialization on either side of the Iron Curtain reinforced the emerging world order at the expense of a forthright acknowledgment of the unique suffering endured by Europe's Jews. The Third Reich's fascism was portrayed in the Eastern Bloc as capitalism's true face, and in the west it was seen as the totalitarian twin to Soviet communism. As knowledge about the Holocaust spread internationally — a result of diaspora, coverage of the Eichmann trial in Jerusalem, the airing of NBC’s miniseries "Holocaust" in many countries, to name some of the prime developments — memorials began to acknowledge the fact that millions of people were slaughtered for no other reason than for being Jewish.

Poland had the largest Jewish population in Europe prior to 1939, some 3 million, nearly all of whom perished. The loss of Jewish culture, now but a small remnant, is a painful absence for many in Poland, some of whom have rediscovered their own previously hidden Jewish background, a phenomenon poignantly explored in Pawel Pawlikowski's 2013 film "Ida." The growing awareness of what Poland lost during the Nazi occupation has led to renewed interested in learning about the long history of Jews in Poland. Warsaw's magnificent POLIN Museum of the History of Polish Jews opened its permanent exhibition in 2014, and annual festivals of Jewish culture in Warsaw and Kraków have grown in popularity in recent years. Some of the most gripping and revealing studies of the Holocaust to emerge in recent years have come from Polish scholars, such as Jan T. Gross and Jan Grabowski. Sadly, these very contributions have been the subject of harsh attacks by Polish nationalists who see any criticism of the actions of individual Poles under Nazi occupation as anti-Polish defamation.

What is particularly tragic about this law is that it overshadows the good work that so many in Poland have undertaken for years to preserve and honor the memory of the Holocaust. It also distracts from the painful history of suffering in Poland brought about by Nazi and Soviet occupation. Poland was victimized by two enemies from without. Some Poles were also terrorized by enemies within. Poland has a painful history that does not become less so by acknowledging crimes committed on its soil by some of its people, just as individual acts of heroism do not redeem the entire state. Collaboration was not a uniquely Polish experience, nor was the rescue of Jews. What was unique was the frequent opportunity for either to occur under the worst possible conditions. By invoking the claim that any mention of Poles who collaborated with the Nazis besmirches all Poles, this law puts history at odds with an idealized, mythical notion of Poland that can be dangerous to the advancement of tolerance, democracy, and civil liberty.

The law states its aim as seeking the "protection of the reputation of the Republic of Poland and the Polish Nation." Instead it will inflict lasting damage on Poland's reputation internationally. Today, as the world commemorates the Holocaust, many in Poland will also undertake that task in the spirit of honoring history, not myth.

Daniel Reynolds is the Seth Richards Professor in Modern Languages in the German department at Grinnell College in Iowa and the author of the forthcoming book "Postcards from Auschwitz. Holocaust Tourism and the Meaning of Remembrance" (New York University Press, 2018).