Ted Cruz and others claim Facebook is squelching conservative views. But the real problem is right-wing fake news 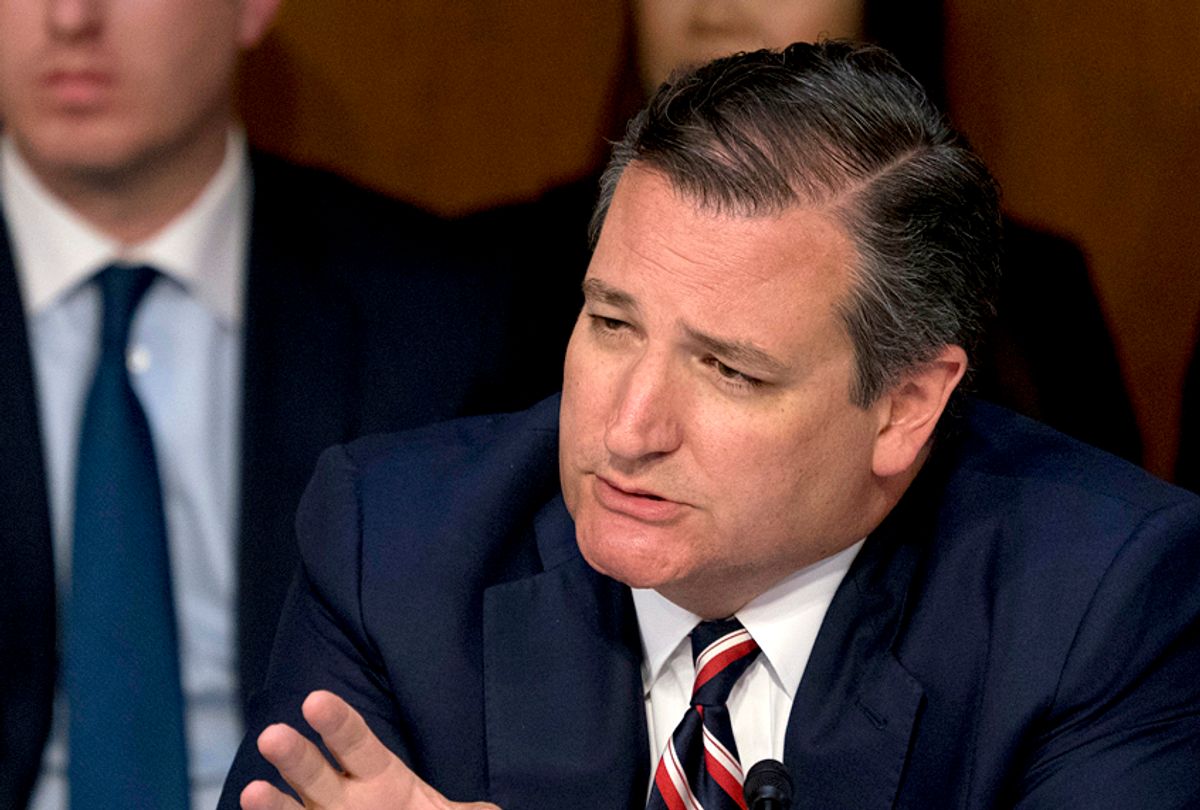 The most surreal aspect of Facebook CEO Mark Zuckerberg’s testimony during two congressional hearings was easily a Wednesday episode featuring Rep. Larry Bucshon, R-Ind., who made detailed inquiries about whether the internet giant was secretly recording his private conversations in order to serve him advertising.

While Sen. Gary Peters, D-Mich., was the only other lawmaker to promote that particular conspiracy theory, a number of Republicans repeatedly questioned Zuckerberg about another false claim: that Facebook is deliberately suppressing conservative opinions through recent changes to its News Feed feature.

“After this new algorithm was implemented, there was a tremendous bias against conservative news and content and a favorable bias towards liberal content,” asserted Rep. Steve Scalise, R-La., the House majority whip. “Was there a directive to put a bias in?”

Several other Republicans, such as Rep. Billy Long of Missouri, invoked two women named Lynette Hardaway and Rochelle Richardson, better known by their internet monikers, Diamond and Silk. The sisters have acquired a large following as black supporters of President Donald Trump but allegedly were judged “unsafe to the community” by some Facebook staffers recently. That diagnosis is clearly off but it is worth pointing out that as Zuckerberg was being asked about the duo, they were appearing on a video broadcast of the conspiracy website Infowars.

Anything is possible in a world where Trump is president of the United States. But as things stand, Facebook’s right-wing critics have utterly failed to make a convincing case that the social media colossus is deliberately censoring conservative points of view while claiming to be cracking down on fake news. None of Zuckerberg’s congressional inquisitors seemed willing to consider a simpler explanation — that the right-leaning internet is dominated by low-quality publications and that publishers of all ideological stripes have been harmed by Facebook’s News Feed changes, particularly those who do little original reporting. (Some, such as the British LGBT publisher PinkNews, have changed their business model to focus on more substantive content. Others, such as the fluff site Little Things, have decided to call it quits.)

The academic research is overwhelmingly clear that fake news is much more common on the American right than the left. In 2016, UCLA researchers found that conservative people were more likely to believe false information that emphasized health threats. Last year, Yale scholars found that Trump supporters were more likely to believe a story if it had been flagged by others as “fake.” Harvard University reported that websites that regularly featured false stories were more popular than Fox News among conservatives on Facebook during the 2016 election.

Even fake news publishers themselves, willing to make up anything if it gets clicks, have acknowledged that conservatives are more susceptible to fabricated news stories.

“I think Trump is in the White House because of me,” Paul Horner, one of the industry’s inventors, told The Washington Post in 2016. “His followers don’t fact-check anything — they’ll post everything, believe anything.”

Seven congressional Republicans challenged Zuckerberg on the topic but the only ones who tried to rely on more than just anecdotes were Scalise and Sen. Ted Cruz of Texas. Neither made a convincing case. The centerpiece of Scalise’s questioning was incomplete research from a website called Western Journal, a publication with a long record of fear-mongering about Muslims and spreading lies about former president Barack Obama. It is not exactly a surprise that the Louisiana Republican did not mention the provenance of the chart he burnished as he questioned Zuckerberg.

Cruz relied on two other approaches, both of them faulty. He began his inquiry to Zuckerberg by asking if the CEO considered Facebook to be a “neutral public forum,” apparently based on the notion that the 1996 Communications Decency Act forces website operators to refrain from moderating user-generated content to avoid legal liability for it. This is completely false. Neither the law itself nor any court opinion about it has ever utilized the phrase. In fact, if you search Google for the phrase “neutral public forum” and ignore all pages with Cruz and Zuckerberg’s names on them, you get zero results.

Rather than point out how ill-informed his congressional critics were, however, Zuckerberg sat patiently in his witness chair, repeatedly saying that he did not want Facebook to engage in political bias and that he continually strove to avoid it.

After his “neutral public forum” gambit, Cruz then referenced a May 2016 article from Gizmodo that discussed allegations from a handful of Facebook contractors who claimed the company had skewed the “trending” section of the News Feed. “Facebook had purposely and routinely suppressed conservative stories from trending news,” Cruz said.

That a Republican senator would cite the Gizmodo piece is no surprise. But Cruz seemed completely unaware that Zuckerberg was very familiar with that story. As Wired’s Nicholas Thompson and Fred Vogelstein reported in February, the public accusation that Facebook was trying to harm conservatives struck panic into upper management. Afraid of telling the truth — that conservative users wanted to read low-quality and fabricated news stories — executives instead decided to grovel to Republicans:

When Gizmodo published its story about political bias on the Trending Topics team in May, the ­article went off like a bomb in Menlo Park. It quickly reached millions of readers and, in a delicious irony, appeared in the Trending Topics module itself. But the bad press wasn’t what really rattled Facebook — it was the letter from John Thune, a Republican US senator from South Dakota, that followed the story’s publication. Thune chairs the Senate Commerce Committee, which in turn oversees the Federal Trade Commission, an agency that has been especially active in investigating Facebook. The senator wanted Facebook’s answers to the allegations of bias, and he wanted them promptly.

The Thune letter put Facebook on high alert. The company promptly dispatched senior Washington staffers to meet with Thune’s team. Then it sent him a 12-page single-spaced letter explaining that it had conducted a thorough review of Trending Topics and determined that the allegations in the Gizmodo story were largely false.

Facebook decided, too, that it had to extend an olive branch to the entire American right wing, much of which was raging about the company’s supposed perfidy. And so, just over a week after the story ran, Facebook scrambled to invite a group of 17 prominent Republicans out to Menlo Park. The list included television hosts, radio stars, think tankers, and an adviser to the Trump campaign. The point was partly to get feedback. But more than that, the company wanted to make a show of apologizing for its sins, lifting up the back of its shirt, and asking for the lash.

According to a Facebook employee involved in planning the meeting, part of the goal was to bring in a group of conservatives who were certain to fight with one another. They made sure to have libertarians who wouldn’t want to regulate the platform and partisans who would. Another goal, according to the employee, was to make sure the attendees were “bored to death” by a technical presentation after Zuckerberg and Sandberg had addressed the group.

The power went out, and the room got uncomfortably hot. But otherwise the meeting went according to plan. The guests did indeed fight, and they failed to unify in a way that was either threatening or coherent. Some wanted the company to set hiring quotas for conservative employees; others thought that idea was nuts. As often happens when outsiders meet with Facebook, people used the time to try to figure out how they could get more followers for their own pages.

Afterward, Glenn Beck, one of the invitees, wrote an essay about the meeting, praising Zuckerberg. “I asked him if Facebook, now or in the future, would be an open platform for the sharing of all ideas or a curator of content,” Beck wrote. “Without hesitation, with clarity and boldness, Mark said there is only one Facebook and one path forward: ‘We are an open platform.’”

The most important consequence of this controversy, Thompson and Vogelstein report, “was that Facebook became wary of doing anything that might look like stifling conservative news.” The social network behemoth had already allowed junk publishers to capitalize on political content, but after the Gizmodo piece it doubled down, forbidding staffers from doing anything to shut down content, no matter how ludicrous it was.

By the end of 2016, totally false stories had generated more Facebook views than legitimate stories. How much of that had to do with the election of Donald Trump may never be known, but it’s safe to say the effects on democratic discourse were not beneficial. After months
of criticism about its fake news problem, Facebook has finally begun making changes to the News Feed to rein it in. As before, Republican members of Congress are trying to get those rolled back, either unaware of the fiasco they caused last time or eager to see it all happen again. Mark Zuckerberg must have felt like he was in a real-life version of “Groundhog Day.”