Comey's exaggerated sanctimony got the whole country in this mess. But now he's hitting Trump where it hurts 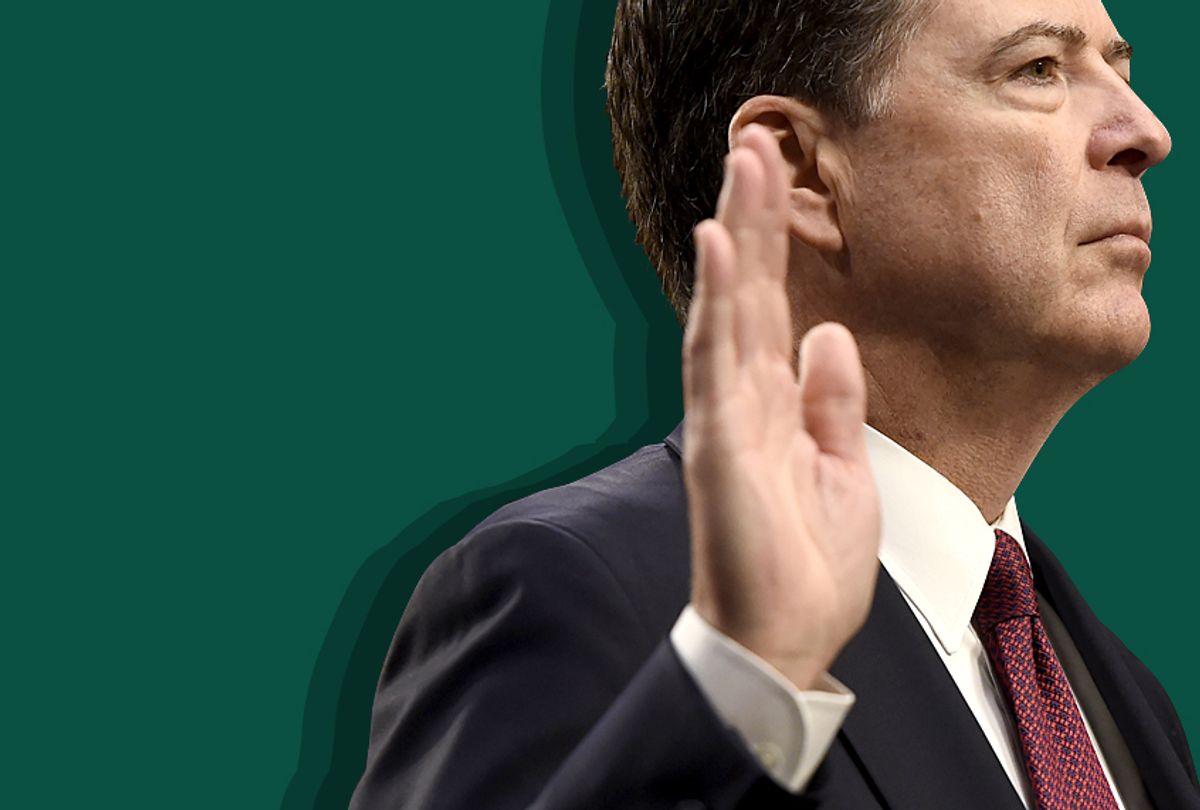 I can count the times I have ever believed and agreed with Donald Trump on one hand. But one of those times was when he called former FBI Director James Comey a "showboater," a term I had used in my Salon column. I wrote a lot about Comey during the presidential  campaign and that word, along with "sanctimonious," were the two that came to mind most often.

I remain convinced that Comey's decision to ignore Justice Department guidelines and comment on the Clinton email case, as he did both in July of 2016 and again 10 days before the election was a decisive factor in Donald Trump's victory and that both comments showed tremendously poor judgment. It was so destructive that it seemed impossible to me at the time that it wasn't motivated by partisanship, particularly since Comey was a Republican who had worked with former New York Sen. Alfonse D'Amato on the Senate Whitewater committee back in the '90s.

But as it turned out, that was motivated by Comey's overweening conceit that his personal rectitude and sense of propriety were better guides than the rules regarding DOJ officials' comments on closed cases and political races. He was wrong. Had he followed the normal guidelines, there's every possibility that Trump would not have eked out his victory in the anachronistic Electoral College and the world would be a safer and saner place today.

I have not read Comey's new book, "A Higher Loyalty: Truth, Lies, and Leadership," which will be published next week. But other members of the press have and it appears that Comey is pulling no punches. You cannot blame him. The president of the United States has gone after him where he lives: Trump unceremoniously fired Comey while he was out of town, complained that he took the government plane back to Washington and since then has publicly trashed his reputation and called his integrity into question over and over again in the crudest terms. Evidently Trump assumed that Comey wouldn't fight back. From the excerpts published so far, it would appear that was a bad bet.

Here are just a few of the headlines Comey's book made on Thursday night:

Of course the former FBI director could not have known that his book would be released a week after Trump's lawyer's office was raided by the FBI with warrants to seize evidence (perhaps including tapes) pertaining to wire fraud and criminal payoffs to porn stars and playmates. Comey had no way to predict that talk of a RICO investigation into Trump's nefarious dealings would have evoked comparisons to gangsters when he wrote that Trump reminded him of crime bosses he had once prosecuted. But that's where we are, in the midst of a whirlwind of scandals that have little to do with Russia other than confirming that the president of the United States is so vulnerable to blackmail that he and his "fixer" Michael Cohen had set up an elaborate system to pay people and threaten them to stay quiet.

Comey may be a bit on the pious side but he's no prude. His descriptions of Trump's reaction to the infamous "pee tape," which Comey had the unenviable task of telling him about, is damning. This is from Philip Rucker of the Washington Post:

[O]n Jan. 11, Comey writes that Trump called him and said he was concerned about the dossier being made public and was fixated on the prostitutes allegation. The president-elect argued that it could not be true because he had not stayed overnight in Moscow but had only used the hotel room to change his clothes. And after Trump explained that he would never allow people to urinate near him, Comey recalls laughing.

“I decided not to tell him that the activity alleged did not seem to require either an overnight stay or even being in proximity to the participants,” Comey writes. “In fact, though I didn’t know for sure, I imagined the presidential suite of the Ritz-Carlton in Moscow was large enough for a germaphobe to be at a safe distance from the activity.”

That's brutal. (It also exposes Trump lying to Comey, since he did stay overnight in Moscow.)

Comey also says Trump is shorter than he looks on TV, is orange and that the president's hands are smaller than his but not unusually so. It would appear that Comey is prepared to give as good as he got from Trump.

The right wing is preparing for battle as well. According to CNN, the Republican Party has put together digital ads and created a website called “Lyin’ Comey” that will be highly critical of Comey’s handling of "Crooked Hillary's" emails, which makes little sense. I guess, like Jared Kushner and Trump, they believe that they can get Democrats on their side by reminding them of this? This was already tried with the fatuous letter after the Comey firing, and it didn't work. Maybe they were out of town that week.

Media Matters has been tracking the Comey smear campaign on Fox News and talk radio for a while and it appears right-wing media has prepared the ground for total character assassination. I'd guess we'll see some angry tweets from the president too. But truthfully? They all seem spent. Between this and calling the FBI a bunch of Stalinists  and Gestapo agents and claiming that the entire Department of Justice is a "deep state" conspiracy, the right is seriously running out of breath. They can hardly even find the energy to call for Hillary Clinton to be locked up these days.

I think James Comey is a man who sees himself as more of a moral arbiter than a lawman. That makes him honest and courageous, but also sorely lacking in common sense or political judgment. Maybe he should have been a priest instead of a cop. His inspiration in life and the subject of his college thesis was the theologian and ethicist Reinhold Niebuhr, so maybe his combination of moral certitude and legal training is what is required to go up against someone as sleazy and dishonest as Donald Trump. We're about to find out. This next week could be a doozy.