New NASA satellite may be best shot at finding Earth 2

...and life in the universe, too 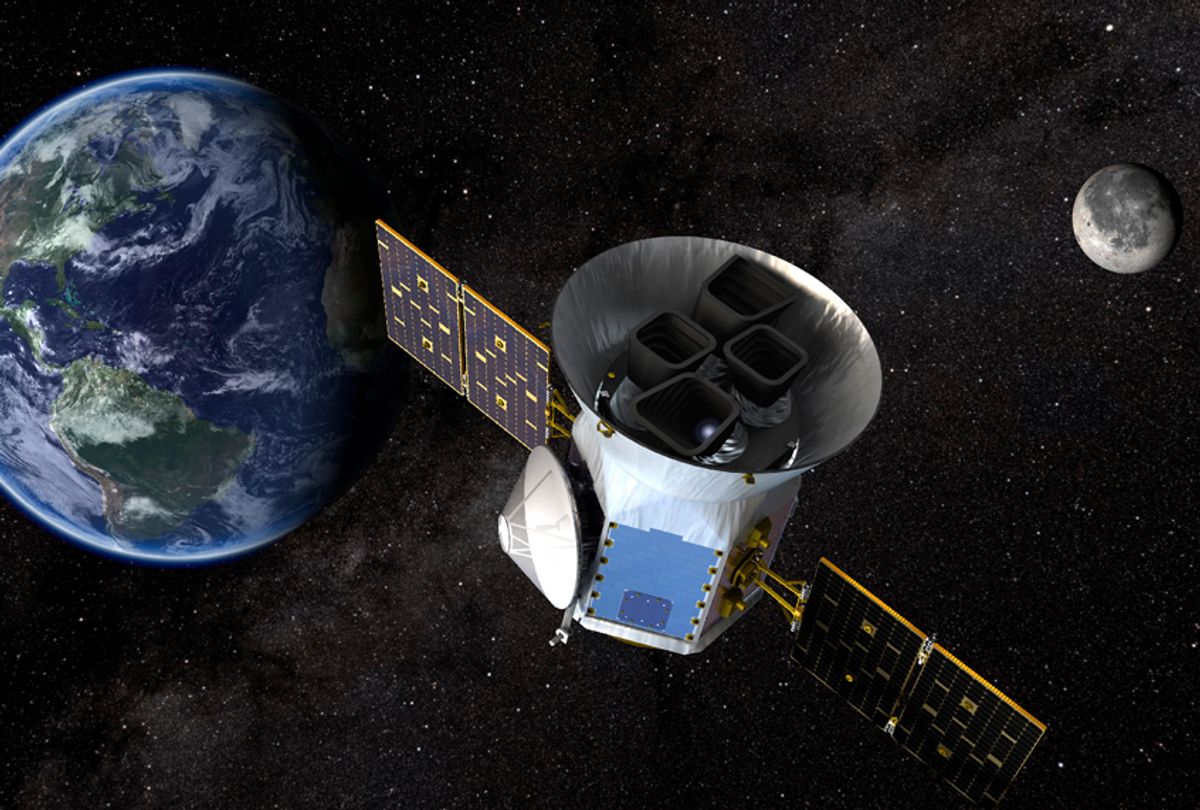 This week will usher in the launch of a new research satellite whose mission has been described as the next phase in the search for Earth-like planets, and which could possibly even find hints of extraterrestrial life. That would be the Transiting Exoplanet Survey Satellite, commonly known as TESS, which is scheduled to depart from Cape Canaveral Air Force Station in Florida on Monday. The satellite will be launched on top of a SpaceX Falcon 9 rocket, and will be tasked as the successor to the Kepler space observatory's mission to discover new insights on exoplanets, meaning planets that exist beyond our solar system.

“The goal of TESS is to produce the catalogue of really good targets that we will be observing for the next decade, or two decades, that people will be really studying in detail,” Stephen Rinehart, a TESS Project Scientist at NASA Goddard Space Flight Center (GSFC), told Salon. “Kepler’s goal was to carry out a census, to study the demographics. Like the census, it’s about understanding the demographics of the population of planets.”

In March 2009, Kepler launched as a space observatory to discover Earth-size planets. The mission was initially expected to last until 2016, but in 2012 one of the spacecraft’s reaction wheels stopped turning. In 2013, a second wheel displayed a malfunction, thus causing a hindrance in the completion of the mission. Luckily, scientists and engineers figured out a way to reimagine Kepler's mission in light of its limited mobility; the second, modified phase of its mission was dubbed "K2."

As Rinehart explained, prior to Kepler, information about exoplanets was limited. Scientists didn’t know how rare, or common, planets were in the universe.

“When Kepler was first proposed, we hadn’t found any exoplanets yet,” Rinehart said. “When Kepler launched, we only had a few. It was Kepler that really was responsible for finding a majority of exoplanets.”

Today, according to NASA, Kepler has discovered 2,343 confirmed exoplanets — 30 of which are less than twice the size of Earth in the habitable zone, meaning they’re at a distance from their solar system’s star where water could possibly exist on a planet’s surface. The K2 phase discovered 309 additional confirmed planets. Now that scientists know there are a lot of planets out there, it’s time to understand them better — and see how unique we are in the universe.

The way in which TESS will do that is by looking at stars only within the nearest few-hundred light years. Rhinehart explained that Kepler pointed at one part of the sky for a long time, and looked at many stars that were thousands of light years away. Since TESS will be looking at stars that are closer, it will be able to gather more critical information to make  follow-up observations.

Rhinehart described the series of follow-up observations as a funnel. Starting with a "TOI" — meaning "TESS Object of Interest" — scientists will first determine if a planet candidate is a planet or not.

After determining if the suspected planet is indeed a planet, scientists will study its host star. Rhinehart explained that whether the planet is interesting or not depends a lot on its star.

“Once you have all that, now you can do a radial velocity measurement, and that involves making a really precise spectroscopic measurement on how fast the star is moving either toward you or away from you and how that changes over time,” Rhinehart explained.

Follow-up measurements with TESS are able to measure a planet's mass and size, and then calculate its density, which can hint at the nature of the world.

“So now I can start talking about, what are these planets made out of: gas like Jupiter, or is it a water world, or is it a rock like Earth, or is there something more exotic?” Rhinehart said.

If you're curious whether we’re alone in this universe, TESS's findings could be extraordinarily interesting. Rhinehart remains hesitant to guarantee that TESS will discover little green men.

“Understanding the origin of life and whether we are alone in the universe, and the possibility of habitability of these distant worlds is really exciting,” he said. “I think that it’s overstating it that TESS is going to do that. The goal of TESS is to find signs of habitability, to find signs that a planet might be habitable.”

Rhinehart reiterated that it’s possible that one of the planets TESS discovers will be habitable, but it might be a while before a confirmation is made, and that’s because it will take a lot of follow-up measurements.

Seth Shostak, a senior astronomer at the Search for Extraterrestrial Intelligence, is excited by the prospect of TESS.

“Looking at it from the big picture, it is one more step down the Yellow Brick Road,” he told Salon.

As scientists get a better understanding of the characteristics of the planets TESS observes, they will be looking for signs of habitability and life — including whether a planet's atmosphere contains oxygen or methane, two signs that may hint at life.

But TESS isn't an interstellar mission. If there is compelling evidence for life on Earth 2.0, a more thorough study would be challenging given the distances involved. Since TESS is studying planets that are light years away — and one light year is around 6 trillion miles — it is unlikely humans or our probes will have the capability to travel such distances in our lifetime.

“If you want to meet the aliens, even if they are only bacteria, you have to go there or bring them here,” Shostak said.