5 things we learned from Kellyanne Conway's attacks on James Comey

As usual, Conway's claims about the former head of the FBI were dubious at best, and hardly hold water 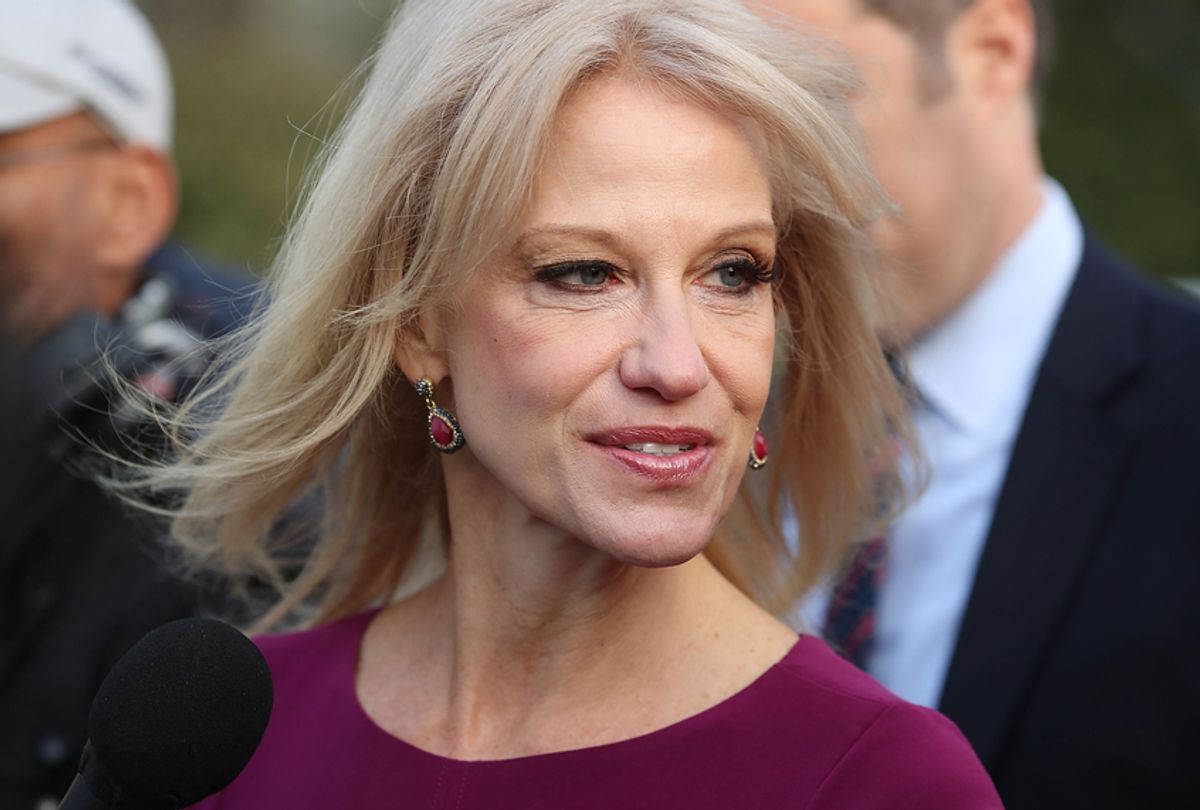 Following an explosive interview in which former FBI Director James Comey warned about the dangers of President Donald Trump, White House Counselor Kellyanne Conway was back to doing what she does best: spinning the truth on TV and absolving the Trump administration of any potential wrongdoing.

In two Monday morning interviews on cable news, and wasting no time for rebuttal, Conway insisted — on Trump's behalf — that Comey was "engaging in revisionist history" and that he "struggled to answer basic questions and he looked a little shaky."

Here are five things we learned from her interviews on ABC's "Good Morning America" and CNN's "New Day."

"This guy swung an election," she told ABC's George Stephanopoulos, who also interviewed Comey. The stunning remark was thought of as a possible admission that Comey's announcement about the FBI's investigation into Hillary Clinton, just days before the election, may have secured Trump's victory.

However, Conway said her comment was sarcastic and should be interpreted as such, when taking context and tone into account. "I rolled my eyes and said 'Really, this guy swung an election?' It was sarcastic," she said.

As she insisted, the headline of the ABC article was also changed, and even CNN's Cuomo seemed to defend her.

But she should have a conversation with Sarah Huckabee Sanders, who tweeted in 2016 that Comey did sway the election.

2. Conway claimed Comey was too focused on the length of Trump's ties and the size of his hands

Ahead of the first meeting between Comey and Trump, which was a briefing in Trump Tower days before the inauguration with other top intelligence officials, Conway asserted that the former FBI head was too concerned with Trump's hands and his obnoxiously long ties, which she said was "really gutter."

She asserted that Comey instead should have focused on informing Trump about the Russian election interference. Comey did indeed write that he made mental notes about Trump's hands and his ties, but the assertion that he was more concerned with that rather than Russia's alleged election interference is dubious, at best, upon minimal scrutinization.

According to Comey, Trump and those with him were informed of Russia's alleged efforts to meddle in the election, but they seemed hardly concerned about the potential gravity of the situation.

"The conversation, to my surprise, moved into a PR conversation about how the Trump team would position this and what they could say about this," Comey said in the interview. "I don’t remember any questions about, 'So what are they going to do next; how might we stop it? What’s the future look like? Because we’ll be custodians of the security of this country.' There was none of that."

3. Conway is quick to toss stones, but forgets she resides in a glass house

Conway told Stephanopoulos that Comey "gave a free political commercial" at the end of his interview, something she has done herself on two separate occasions. Conway was found to have violated the Hatch Act twice, "by advocating for and against candidates" in the Alabama special election in December. But Conway's opinions on Comey have changed since December 2016.

As for Comey's "free political commercial," here's what he told Stephanopoulos:

I think most likely, in a very important presidential election — the next presidential election, where I do hope people of all political stripes will realize what unites us is actually more important than what divides us. And that we have to choose a leader -- I don't care what party a leader's from. We have to choose a leader who will embody the . . . values of this country. That's how I hope it ends.

When asked if the president has any evidence to disprove Comey's claim that Trump had asked him to stop investigating Flynn, the then-national security adviser, Conway asserted that in his testimony to Congress, Comey said no one had asked him to do so. This assertion is indeed not factual.

She was quickly interrupted by Stephanopoulos for the second time, who said, "That is not correct either."

On CNN, Conway told Cuomo that the president believed the former FBI chief was "engaging in revisionist history" in his book. She added, "He loves to divert the spotlight to himself and be the center of power." The assertion, regardless of the authenticity, was laughable, coming from the Trump administration of all places.

If there's anyone that loves to engage in revisionist history, it's the man who has repeatedly insisted the crowd size at his inauguration was larger than that of his predecessors — which math disproved. Former Press Secretary Sean Spicer has still refused to admit it was a lie.

Further, there is perhaps not a single person on the planet who enjoys basking in the spotlight and being the center of power and attention more than the former reality TV star who became the president.

But Kellyanne Conway was speaking to an audience of one — just as she always has.