James Comey: Donald Trump "is morally unfit to be president"

Asked if he believed Trump broke the law, Comey said there was "certainly some evidence of obstruction of justice" 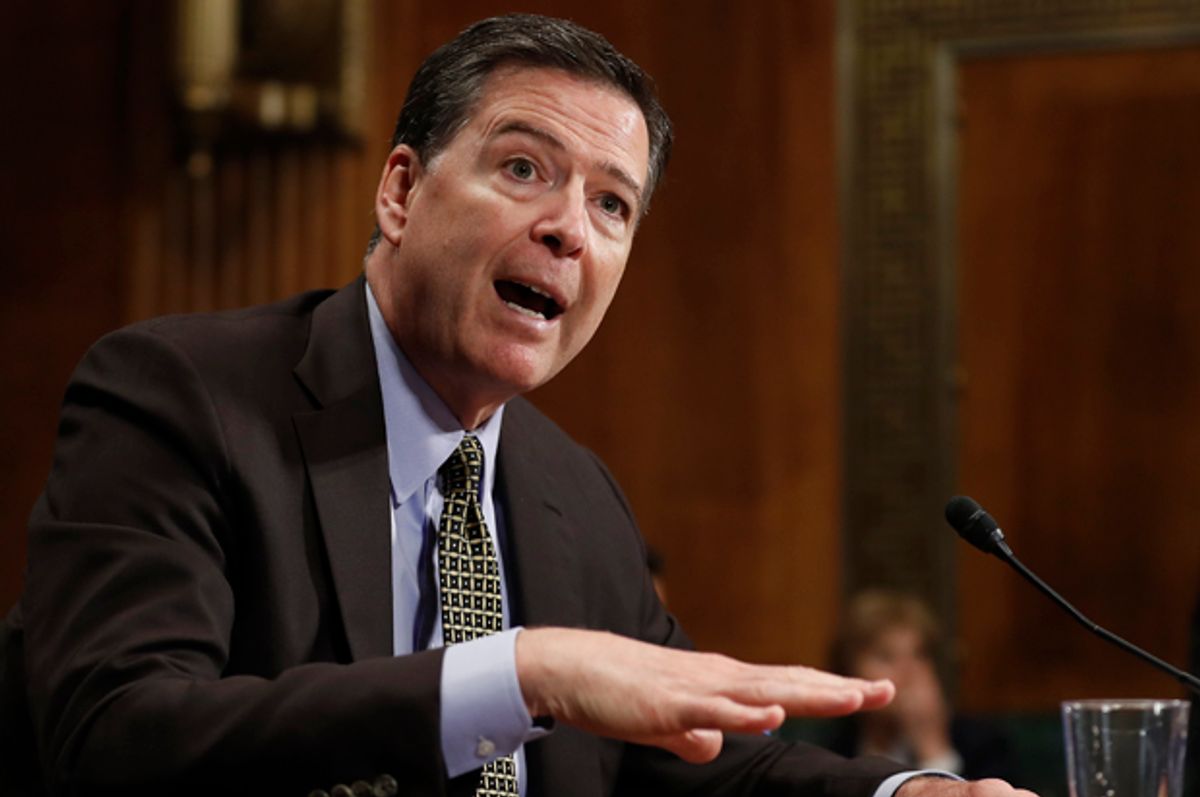 Former FBI Director James Comey had plenty of thoughts to offer up about his former boss President Donald Trump in a 40-minute interview with ABC's George Stephanopoulos.

Throughout the interview, Comey heavily criticized Trump and described him as a "person who sees moral equivalence in Charlottesville, who talks about and treats women like they're pieces of meat, who lies constantly."

"There's something more important than that that should unite all of us, and that is our president must embody respect and adhere to the values that are at the core of this country," Comey said. "The most important being truth. This president is not able to do that. He is morally unfit to be president."

The interview came as Comey has embarked on a book tour to promote his new tell-all, "A Higher Loyalty," parts of which detail his thoughts on interactions with Trump. A major theme of the book, which will be released Tuesday, is that Comey expressed the need for truth and wrote that it's a "dangerous time" in the U.S.

I worry that the norms at the center of this country — we can fight as Americans about guns or taxes or immigration, and we always have. But what we have in common is a set of norms. Most importantly, the truth. "We hold these truths to be self-evident," right? Truth is the fourth word of that sentence. That's what we are. And if we lose that, if we lose tethering of our leaders to that truth, what are we? And so I started to worry. Actually, the foundation of this country is in jeopardy when we stop measuring our leaders against that central value of the truth.

Comey likened Trump to a "forest fire" that does "tremendous damage," but he said that "a forest fire gives healthy things a chance to grow that had no chance before that fire."

When asked how the American people can work to put that fire out, he answered:

We put it out in two ways. We put it out first by not becoming numb to the fact that the truth is being assailed every day. By not deciding that it's just too much to pay attention to because that's the path to losing truth as the central value in this country. So all of us have to constantly be involved and call it out when we see the truth endangered, when we see lying. And then next, we need to get involved. The American people need to stand up in the public square and in the voting booth and say, "Look, we disagree about an awful lot. But we have in common something that matters enormously to this country. And our leaders must reflect those values."

Memos penned by Comey revealed that Trump asked him to drop the investigation into his former National Security Adviser Michael Flynn. The interaction has been reported to be a focus of Special Counsel Robert Mueller's investigation, which has launched widespread speculation of whether or not the president obstructed justice.

On whether or not he should have pushed back on Trump's inappropriate comments, Comey said:

But it's possible that in the moment I shoulda-- you know, another person would have said, "Sir, you can't ask me that. That's a criminal investigation. That could be obstruction of justice." Again, it's one of these deals where I'm so-- even though I knew something important was going to happen, it didn't occur to me he was going to ask me to drop a criminal investigation. And so a little bit of it is the shock of it, and part of it is just from the environment I think I had a good gut sense that he knows what he's doing.

When asked if he believed Trump did break the law, Comey said it was a possibility.

"I mean, it's certainly some evidence of obstruction of justice," he explained. "It would depend and — and I'm just a witness in this case, not the investigator or prosecutor, it would depend upon other things that reflected on his intent."

The day after Trump fired Comey last May, he met with Russian officials in the White House and called Comey a "nut job." Comey said he was shocked and that Trump's entire basis for firing him, which Trump claimed was for poor performance and came only at the recommendation of Deputy Attorney General Rod Rosenstein, quickly fell apart.

Wow, was my reaction. First of all, what are the Russians doing in the Oval Office? One, as a counter intelligence person I'm thinking, "That's crazy--" without any Americans being present, one. And, two, it-- the pretense is melting away, the bit about, "You were fired because of how you handled the e-mail investigation," is melting away. You were fired because of the Russia investigation. That's the substance of what I heard those words as.

Asked about why he leaked the information to the press to ensure a special counsel was appointed, he said:

Because I wanted someone without political conflict, someone who is not “amica nostra,” to find the facts. And I don't know what they'll find. I don't know whether Bob Mueller s-- and his people will conclude that President Trump committed a crime or not. I don't really care, so long as it's done in the right way, confidently, honestly and independently.

And I know the F.B.I. would be that way, and now I know the prosecutors will be that way. And whatever they find, the American people can rely on because they will find the truth. Again, I don't sit here saying, "I hope the trust is that," or, "I hope the truth is this." I just want them to find the truth. And I'm confident that they will, unless he's interfered with in some way.

Comey also expressed the importance of Mueller's job security and said that if he were to be fired it would "set off alarm bells."

As expected, the president has berated Comey on Twitter in recent days and has also weighed in on Monday morning and responded to the interview.

Lawmakers, pundits and others across the spectrum had plenty to say on Twitter about the interview.

The interview offered a deeper look into Comey's rationale for his actions in the final year he was the head of the FBI. But Comey represents another example of a powerful figure who has been willing to stand up to Trump, but less so to the decayed political apparatus that helped create him.

Comey said early in the interview that "we can fight as Americans about guns or taxes or immigration, and we always have," but there had to be a line somewhere. However, over the past few decades, American political discourse has devolved, leading us to where we are now. For Comey to say that Trump is the red line ignores all the factors that brought us here.

Party servitude, by both the public and by lawmakers within the two major parties, caused widespread divisiveness long before Trump. Of course, he only accelerated that, but it also created large factions of resentment towards the Washington establishment, which Trump undoubtedly tapped into in the 2016 election.