"Michael Cohen has never represented me in any matter," the Fox News countered on Twitter 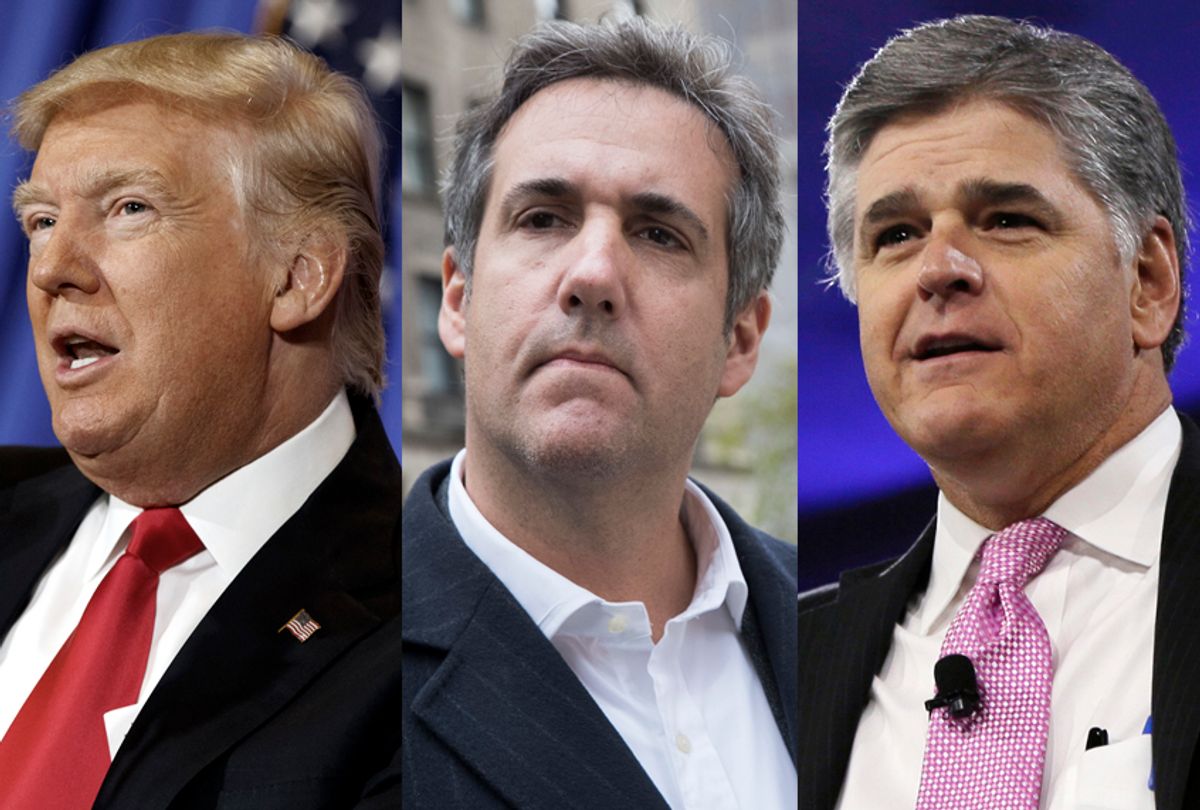 Fox News star Sean Hannity was revealed Monday as the mystery third client of Michael Cohen, the personal attorney of President Donald Trump, according to NBC News. Hannity, who is known to often speak privately with the president, has provided unwavering on-air support to the Trump administration.

Cohen had attempted to prevent Hannity's name from being made public. He said he had two other clients: the president and Elliott Broidy, former deputy finance chairman of the Republican National Committee. Cohen reportedly negotiated non-disclosure agreements with both Trump and Broidy's alleged mistresses.

Gabriel Sherman, a special correspondent at Vanity Fair, reports Sean Hannity hired Cohen to defend him last year around the time Media Matters for America called for advertiser boycotts against him.

"Sean Hannity hired Michael Cohen to help defend him against left-wing groups that were calling for boycotts in the wake of Bill O'Reilly's ouster from Fox News under pressure from advertisers and left-wing groups," Sherman said on MSNBC.

"We did not knowingly interact directly with Michael Cohen," a Media Matters spokesperson told Maxwell Tani, a media reporter at The Daily Beast. "However, we also don't know the nature of the work Cohen may have been doing on behalf of Sean Hannity."

The Fox News host later clarified those remarks on his personal Twitter account. "Michael Cohen has never represented me in any matter. I never retained him, received an invoice or paid legal fees," Hannity tweeted. "I have occasionally had brief discussions with him about legal questions about which I wanted his input and perspective."

"I assumed those conversations were confidential, but to be absolutely clear they never involved any matter between me and a third-party," he continued.

On his radio show following the news, Hannity said, “I think it’s pretty funny. It's very strange to have my own television network have my name up on the lower third.” He later added he has eight lawyers, and never paid Michael Cohen, but occasionally sought informal legal work from Cohen, according to Tani.

As the news broke, Fox News reported Hannity received legal aid from Michael Cohen. Fox's Shepard Smith addressed Hannity, "We just spoke with his publicist here at Fox News who says that he says they've been friends for a long time, he never denied that he was his lawyer, that he did some legal work along the way, and that's the extent of that."

Hannity has been an ardent backer of Trump, both on-air and off, and has repeatedly attacked Mueller’s investigation into Russian meddling in the 2016 election. He has also frequently defended Cohen in the days since the FBI raided Cohen's home and office — failing to mention Cohen had represented him.

"As I have been warning, Mueller is out to get the president and it appears at any cost," Hannity said last Monday on his Fox News program, following reports of the FBI raid.

“Now keep in mind, Cohen was never part of the Trump administration, or the Trump campaign,” he continued. "This is now officially an all-hand-on-deck effort to malign, and if possible, impeach the president of the United States."

The following evening, on his program, Hannity slammed the FBI's raid as "an unprecedented abuse of power." The next day, he called it "highly questionable."

Monday's hearing stemmed from a motion for a temporary restraining order under which Cohen's attorneys are challenging an FBI search last week of Cohen’s office, home and hotel room.

Cohen, who is under criminal investigation for possible bank fraud and campaign finance violations, has argued that materials seized in the raid are protected by attorney-client privilege and need to be reviewed before federal prosecutors have a chance to review them.

New court filings Monday indicated that Trump wants to review the materials seized from Cohen during an FBI raid last week so he can determine which are protected by attorney-client privilege, according to NBC News.

Cohen has denied wrongdoing, and President Trump has blasted the raid,calling it "an attack on our country" while stating his view that Mueller's investigation is a "witch hunt" and a "disgrace."

In addition to Cohen, adult film star Stormy Daniels, whom Cohen secretly paid $130,000 days before the 2016 presidential election to keep her quiet about the details of an alleged affair with Donald Trump, also attended Monday's court proceedings. Daniels claims she had a sexual encounter with Trump in 2006, a claim the White House and Cohen have denied.