Maybe Fox News' biggest name is just a footnote in this scandal. But nothing about his explanation is convincing 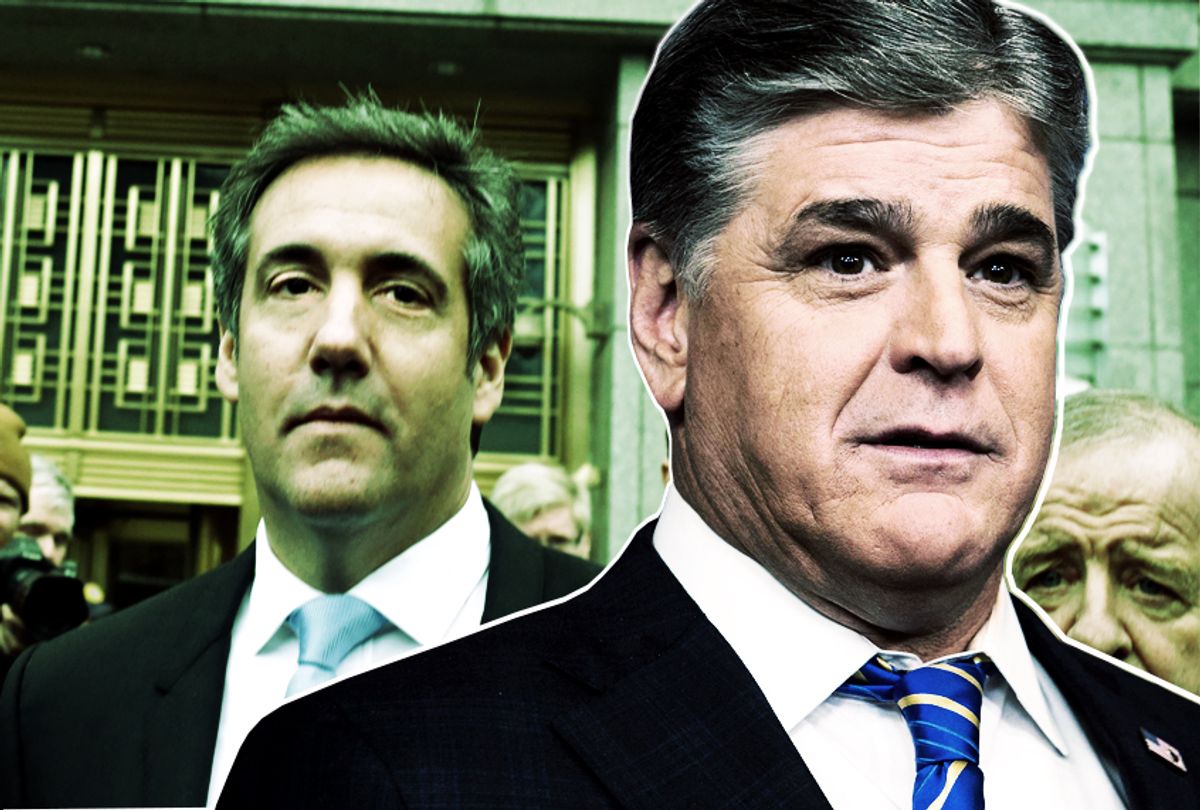 I think everyone knew the Michael Cohen hearing on Monday would make news. It was anticipated that Judge Kimba Wood would decide whether or not the president would be granted a restraining order against his own Department of Justice, preventing them from searching the documents and other items seized from his attorney's office and homes last week. And we knew that Stormy Daniels and her attorney, Michael Avenatti, would attend, so there was sure to be a ton of press and wall-to-wall coverage.

Wood had said on Friday that she wanted to know how many clients Cohen represented, and who they were, before making a determination as to whether or not the search was improper. When Cohen's attorneys said they didn't have that information, she told them to make sure their client was in court on Monday, prepared to answer the question. Everyone was eager to hear the answer.

But nothing prepared us for the news that Cohen only represents three clients: President Trump, deputy Republican National Committee Finance chair Elliott Broidy -- and Fox News host Sean Hannity. Nobody saw that one coming.

Since all the lawyers had been told Friday that this question was on the agenda for Monday's hearing, there was no reason for those who actually knew the answer to be surprised that it was asked. In fact, Cohen's lawyers argued that they were prepared to immediately appeal any decision to reveal the third client's name, since he was adamant about not wanting to be publicly identified. The judge was unmoved and demanded the name. They gave it. There was no appeal.

Since Sean Hannity had clearly told Cohen that he didn't want his name to be public, it seemed odd that he didn't have a prepared statement ready just in case. He had to know there was at least a 50-50 chance he'd be revealed. Instead, Hannity dribbled out explanations on his radio show, on Twitter and through statements over the course of the day, asserting that he had never paid Cohen or put him on retainer and that there was no third party involved. Likely Hannity was trying to reassure his wife that he didn't have a "Stormy" issue.

The Fox host is now claiming that he saw Cohen as a pal he consulted on a casual basis about some innocuous real estate matters. Nonetheless, he definitely considered it to be an attorney-client relationship, demanding that the appropriate privilege be recognized and all communications be off-limits to government agents.

Hannity seems to want it both ways, but that's not really going to work. He can probably claim that his communications with Cohen are privileged, but he also needs to explain why, if their consultations were so trivial, he hasn't simply admitted it and waived the privilege. He's within his legal rights to assert that privilege, of course, but making a federal case involving the president out of an apparent trifle doesn't seem too smart.

Moreover, this is a man who is worth more than $80 million. Hannity owns a private jet, which he lent to his old friend Newt Gingrich during the 2016 campaign so the former speaker could go meet with Trump in Indiana to be vetted for the vice presidency. It seems unlikely that a man of such means would consult a thuggish fixer such as Cohen for routine legal advice when he can clearly afford any top-drawer attorney he wants.

No, it's obvious that Hannity is claiming attorney-client privilege over something he doesn't want people to know about. Whatever it is, if government prosecutors weren't suspicious before, you can bet this amateurish legal move ensures they are now.

None of this would even have come up, if Trump's lawyers had not objected to the Department of Justice's "taint team" process, which is used routinely in cases where there are issues of attorney-client privilege. If Hannity isn't implicated in any crime, the taint team would have looked at his communications and realized there was nothing there that the FBI and prosecutors working on Cohen's case even needed to know about.

But Trump and his people believe the FBI and the U.S. attorney for the Southern District of New York are all part of a "deep state" conspiracy and cannot be trusted. Indeed, the president's lawyers demanded that the president be allowed to personally review all the documents, prompting the judge to ask if he really had the time for such a project. (He actually does, but it might mean forgoing some golf, tweeting and "executive time," so that's probably out.) As Salon's Matthew Rozsa pointed out, that gambit didn't work for Richard Nixon and it's unlikely to work for Trump either.

Judge Wood did not accede to the request to review the documents, but despite her stated "faith in the Southern District U.S. Attorney’s Office that their integrity is unimpeachable," she is considering appointing a "special master" to play some role in the process, perhaps to show that she understands the president's concerns. (Personally, I think every government legal official involved in these Trump cases should learn from James Comey's mistakes and just play it by the book.)

This part of the story will likely end up being another sideshow, as far as the Trump presidency is concerned. But if anyone thought that Sean Hannity had any integrity, this ended it. Even Alan Dershowitz came down on him on his own show on Monday night:

Sean Hannity has always struck me as a Trump true believer. But he takes it to extremes at times, which makes you wonder. All of Trump's supporters in the media, even those on Fox News, have had occasion to criticize him from time to time. Hannity has never shown even the slightest annoyance with the president, much less any substantive disagreement. Knowing that Hannity is involved with Trump's notorious fixer, regarding something he doesn't want the public to learn about, could certainly lead one to suspect that Hannity is unwilling to criticize Trump for approximately the same reason Trump is unwilling to criticize Vladimir Putin. Maybe that's just how all these people operate.