"Who did Sean Hannity have sex with?": Late-night hosts have a blast at Fox News host's expense 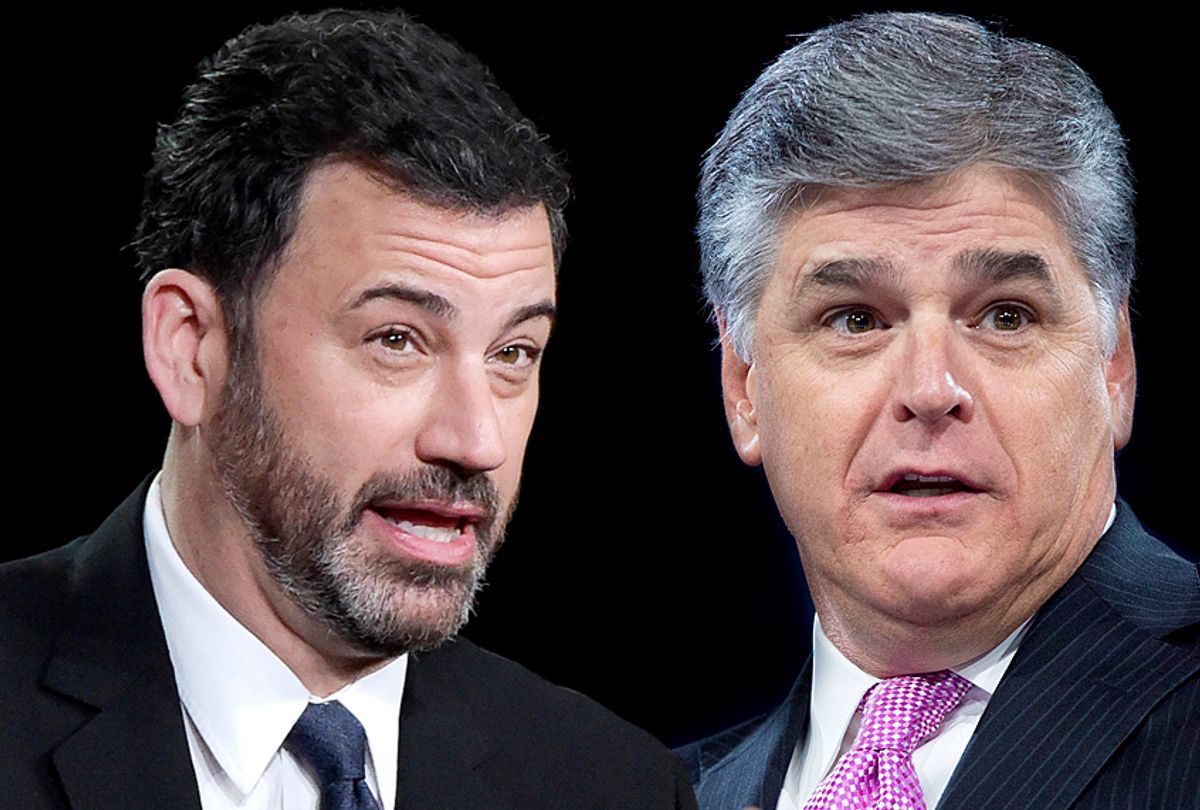 After it was revealed in court on Monday afternoon that Fox News primetime anchor Sean Hannity was the third previously undisclosed client of New York attorney Michael Cohen, late-night hosts reveled in schadenfreude.

"Pro tip for the president," Stephen Colbert advised. "When your lawyer needs a lawyer — you need a lawyer."

Hannity railed against Special Counsel Robert Mueller on his primetime show, after the FBI raided Cohen's office and hotel room, though Hannity never informed his viewers that Cohen had represented him at some point since 2017.

Colbert reacted to the news by caressing himself while sprawled out in a chair with a glass of wine.

He added, "Cohen only has two other clients and all he does for them is pay off mistresses."

Colbert said the news raised the "obvious question: who did Sean Hannity have sex with?" The late-night host said he couldn't prove it, but he guessed that it might be "that football he's always holding."

"What does matter is that Sean Hannity is out there every day — every night — defending Trump and Michael Cohen," Colbert explained. "I've go to agree with Sean on this one, the media is spinning out of control. Did you hear about this guy on Fox News who's defending Cohen without revealing that it's his lawyer too?"

But Colbert wasn't the only late-night host to get his jokes in after Hannity's name was revealed. ABC's Jimmy Kimmel quickly poked holes in Hannity's defense after Hannity attempted to perform some damage control.

"That's normal he has a lawyer he doesn't pay," Kimmel joked. "By the way, I'm thinking of hiring Michael Cohen as my lawyer because he only has three clients — apparently he works for free. He doesn't take money from any of them."

Kimmel then blasted Hannity after Hannity said he never needed Cohen for "any matter between me and a third-party."

"What kind of legal advice doesn't involve a third party?" Kimmel asked. "Unless, maybe Sean Hannity [is] thinking about suing himself?"

"Daily Show" host Trevor Noah joined in on the action and joked that "even Instagram models" who advertise products on their profiles have higher ethical standards than Hannity.

"I'm not expecting him to aspire to the levels of the Kardashians, but c'mon Sean," Noah said.

"Once you know that Hannity has personal skin in the game, like with Cohen, it's fun to go back and look at everything he said about the FBI raid, because now we can see that Hannity wasn't just mad — he was scared."

Comedians weren't the only ones with jokes. Even CNN anchors couldn't help but take jabs at Hannity.