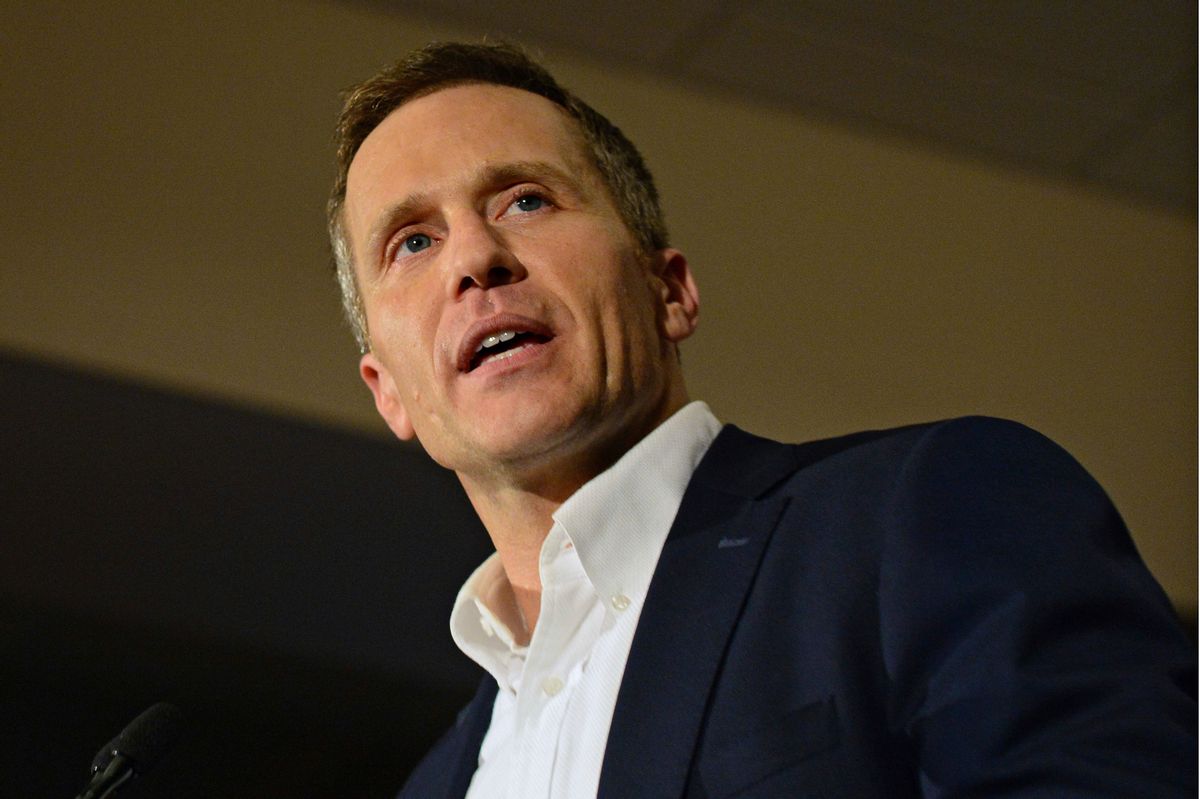 FILE - In this Nov. 8, 2016 file photo, Missouri Republican Governor-elect Eric Greitens delivers a victory speech in Chesterfield, Mo. Greitens, has promised to sign a right-to-work law when he gets into office. (AP Photo/Jeff Curry, File) (AP)
--

The tension between Republican state leaders in Missouri and the state's Republican governor continues to tighten, even as polling shows that Republican voters in the state are standing firmly with Eric Greitens.

On Tuesday, Missouri Attorney General Josh Hawley announced at a news conference, according to CNN, that his office has uncovered evidence of financial wrongdoings by Greitens. By the end of the day, several of the state's other GOP lawmakers had called for the governor to resign.

“Leaders at all levels of government are entrusted with an incredible responsibility to the Missourians we represent,” said a joint statement from House Speaker Todd Richardson, House Majority Leader Rob Vescovo and House Speaker Pro Tem Elijah Haahr. “When leaders lose the ability to effectively lead our state, the right thing to do is step aside. In our view, the time has come for the governor to resign.” The St. Louis Post-Dispatch reported that the Senate president pro tem, a Republican, released a similar statement calling for Greitens to step down.

Hawley alleges that Greitens improperly obtained an electronic donor list from a charity he founded, The Mission Continues, which helps veterans adjust to life back home, and used it for fundraising.

“Mr. Greitens used that list for political fundraising he transmitted that list for political fundraising without permission of The Mission Continues,” Hawley said on Tuesday. "If proven, these acts could amount to the unauthorized taking and use of property -- in this case electronic property. Under Missouri law, this is known as computer tampering and given the value of the list in question, it is a felony."

The evidence has reportedly been turned over to St. Louis Circuit Attorney Kim Gardner, who will ultimately decide if there is credible evidence to charge Greitens or not.

Hawley, who is running to unseat U.S. Sen. Claire McCaskill, D-Mo., had already called on Greitens to step down after the governor was indicted by a federal grand jury. In February, a jury indicted Greitens on one count of a felony invasion of privacy charge stemming from a 2015 sexual affair that he claims was consensual but which the woman claims was not. She reportedly accused Greitens of tying her up against her will and then using the picture he snapped as blackmail for her silence.

“The House Investigative Committee’s Report contains shocking, substantial, and corroborated evidence of wrongdoing by Governor Greitens,” Hawley said in a statement on April 11. “The conduct the Report details is certainly impeachable, in my judgment, and the House is well within its rights to proceed on that front. But the people of Missouri should not be put through that ordeal. Governor Greitens should resign immediately.”

"In fact, there's nothing close to wrongdoing. Eric built The Mission Continues from scratch, and he helped thousands of veterans by doing so. The Attorney General held a completely frivolous and inappropriate press conference on a non-issue," he said in a statement, via CNN.

The Mission Continues released a statement, too, indicating they were cooperating with Hawley’s office.

"The Mission Continues did not provide, nor authorize the use of, our donors' information to any persons or groups for political/campaign purposes," the group said in a statement, via CNN. "We appreciate that AG Hawley has recognized that the evidence fully supports that The Mission Continues did not authorize the use of any donor information for political purposes."

Yet, interestingly enough, all of this unappetizing fodder appears to be only doing minor damage to Greitens’ reputation among Missouri Republicans.

According to an April 2018 Mason-Dixon Missouri Poll— where 625 registered Missouri voters were interviewed by telephone— Greitens has a 63 percent approval rating with Republican voters; only 20 percent disapprove. The survey shows that among Republicans, Greitens’ approval ratings are stronger in rural areas than in metro areas. When asked if the governor should resign or not, 48 percent of those polled said he should resign, 36 percent said he shouldn’t, and 16 percent cited “not sure.”