Nikki Haley may go the way of Rex Tillerson 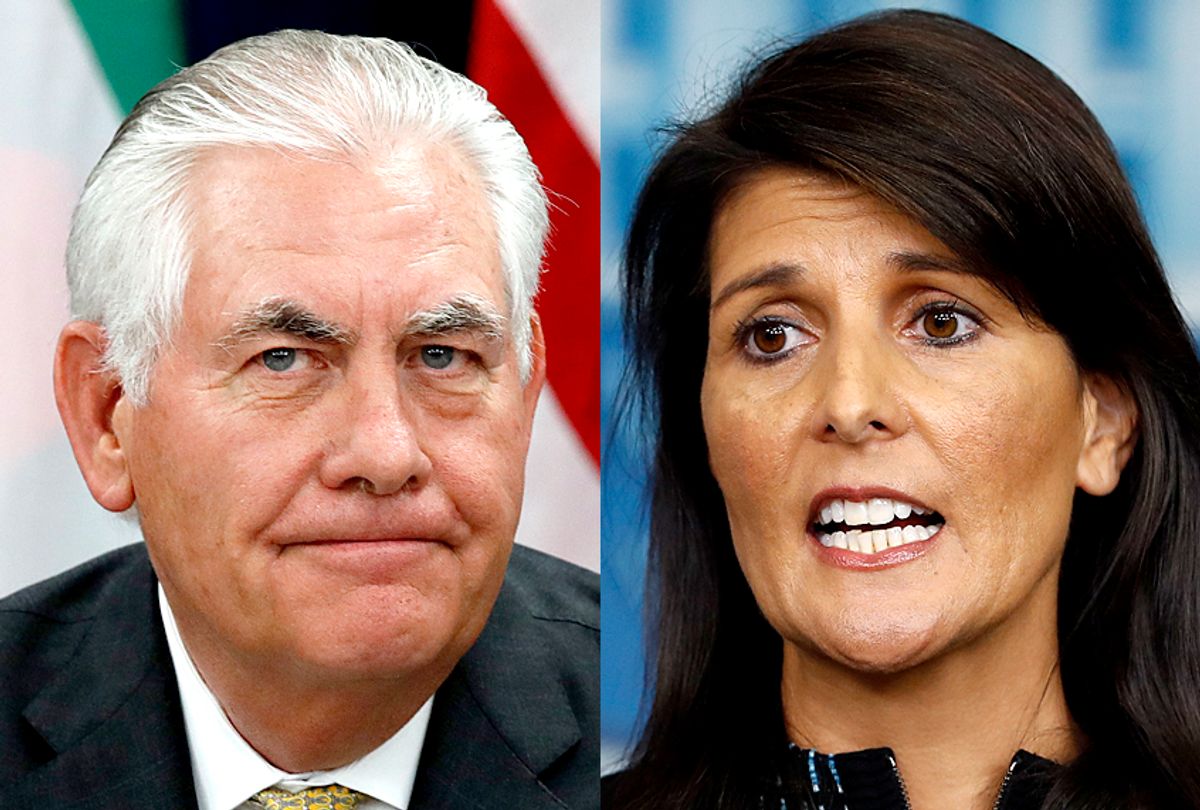 But, at some point over the weekend, Trump changed his mind. While sources are unclear as to what prompted the president to do this, the consensus was that Haley — who has emerged as one of Trump's main foreign policy spokespeople after the departure of Secretary of State Rex Tillerson — was not informed of the updated plans.

When a top Trump administration official attempted to blame Haley instead of Trump for the inconsistency between her statements and the administration's position, a war of words began.

"She got ahead of the curve. She’s done a great job. She’s a very effective ambassador, but there might have been some momentary confusion about that," Larry Kudlow, Trump's national economics adviser, told reporters at a briefing in Florida, according to The New York Times.

When Haley heard about Kudlow's remarks, she spoke with a reporter from Fox News to publicly disavow that version of the story. Dana Perino, the journalist in question who spoke to Haley, later quoted her on air as saying, "With all due respect, I don’t get confused."

Kudlow later called Haley to apologize, saying that "she was certainly not confused. I was wrong to say that — totally wrong."

He added, "As it turns out, she was basically following what she thought was policy. The policy was changed and she wasn’t told about it, so she was in a box."

This wasn't the first time that Trump and Haley have butted heads on foreign policy, although it may be the most public of those occasions. Haley has always had a more hawkish approach toward Russia than Trump, which has caused tensions between the two of them on that issue. As the Times reported:

Haley has also found ways of seemingly criticizing the president even in contexts when she would otherwise be considered to be ostensibly supporting him. When discussing Trump's ban on immigrants from a number of predominantly Muslim countries on "Today" in March 2017, Haley insisted, "It's not a Muslim ban. I will never support a Muslim ban. I don't think we should ever ban anyone based on their religion." Her denial came in spite of the fact that the president's own words had been cited as proof that it was intended to be a Muslim ban.

In the same interview, Haley had also included a veiled criticism of the president's incessant tweeting, even as she defended his policies.

"He is our president, Matt. And so what he does, faults and all, he's our president. And so I want him to be successful," Haley told then-host Matt Lauer. "When these tweets come out, I mean, do I look at 'em and say, 'Okay, where did that come from?' Yes. But I don't pick up the phone and say what are you doing. I just know that's who he is."

The flare-ups between Trump and Haley are reminiscent of the conflicts between the president and Tillerson that ultimately culminated in the secretary of state's departure. In October, the president publicly undercut Tillerson when it came to the issue of opening diplomatic talks with North Korea (Trump would then decide to engage in talks with North Korea only five months later). After Tillerson told reporters that he was talking to North Korea, Trump tweeted, "I told Rex Tillerson, our wonderful Secretary of State, that he is wasting his time trying to negotiate with Little Rocket Man. Save your energy Rex, we'll do what has to be done!"

He added, "Being nice to Rocket Man hasn't worked in 25 years, why would it work now? Clinton failed, Bush failed, and Obama failed. I won't fail."

Tillerson's position with Trump was also weakened when it was reported that he had privately referred to the president as a "moron" — a story that initially triggered suspicions that Tillerson would soon be on his way out.

With both Tillerson and Haley, the underlying problem isn't simply that the Trump administration is having problems satisfying its personnel. When foreign policy advisers who are meant to represent the wishes and goals of the president are repeatedly and publicly undermined by the commander-in-chief himself, it can create confusion among world leaders as to whether those individuals are credible. If they can't be trusted to accurately represent the president's thinking, they lose much of their effectiveness.

Haley's dissatisfaction with Trump extends back to before she was appointed as his United Nations ambassador. During the 2016 presidential election, she initially supported the campaign of Sen. Marco Rubio, R-Fla., and switched to Sen. Ted Cruz, R-Texas, after Rubio dropped out, according to USA Today. During that campaign, Trump openly resented Haley's opposition, claiming that the people of South Carolina were embarrassed by her and prompting Haley to respond, "Bless your heart," according to CNN. Although she endorsed Trump after he won the Republican nomination, she also made it clear that she was "not a fan" of the then-reality TV star.