"People think it's news, because he doesn't sweat as much as Alex Jones," the "Full Frontal" host says 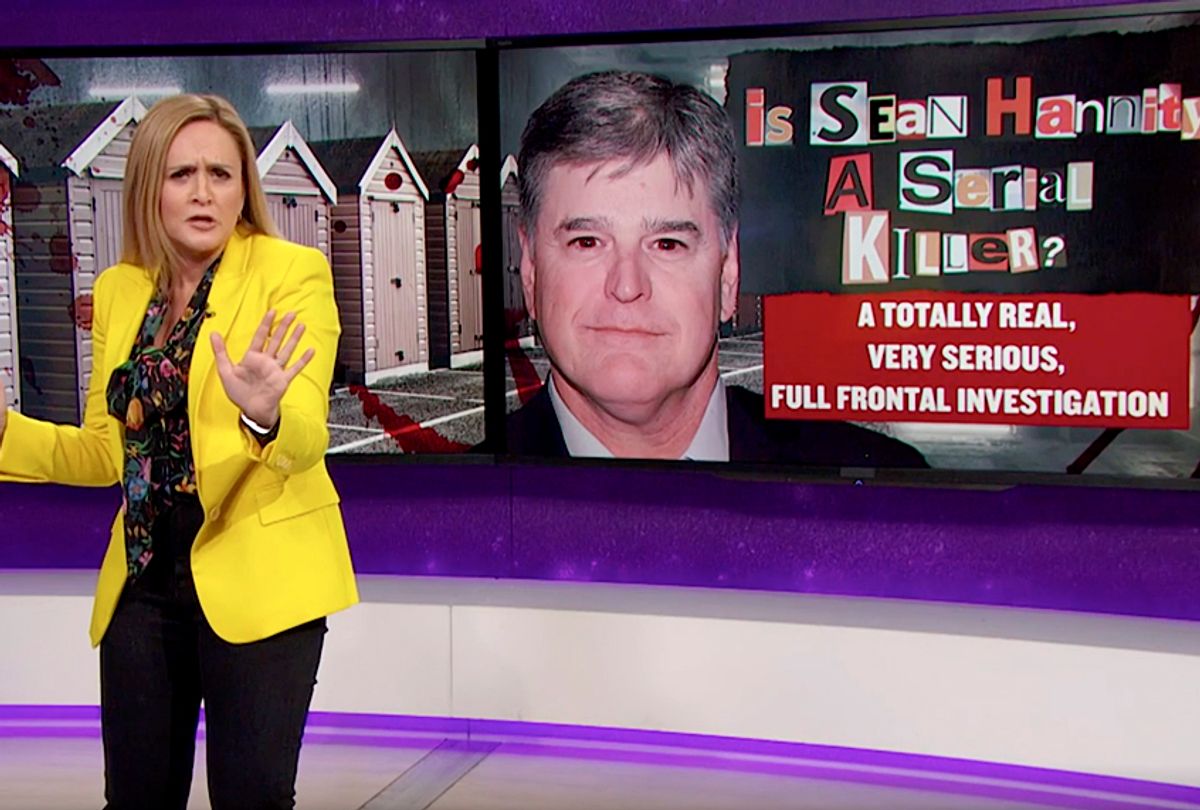 It was the story that rocked politics last week: Sean Hannity, the poster face of Fox News, was unmasked in a federal court hearing as the mystery third client of President Donald Trump's personal attorney, Michael Cohen.

The news also ricocheted across the media industry, as an obvious conflict of interest held by the network's highest-rated star was suddenly on display for all of America to see.

"His whole show is just an hour-long list of lies and conspiracy theories," Samantha Bee said as she attacked Hannity for his supporting role in the "fake news" epidemic on "Full Frontal" Wednesday night. "People think it's news because he doesn't sweat as much as Alex Jones, and because he's on a channel that calls itself 'news.'"

But one lingering question remained unanswered, and Bee really went there on behalf of her country last night. "Why the f**k did Sean Hannity, the guy who made $36 million last year retain a graduate of the actual worst law school in the country, a guy who's whole business models seems to be built around blackmailing mistresses?"

Cohen is a graduate of Western Michigan University's Cooley Law School, which was indeed ranked as the worst American law school of 2017 by "The Faculty Lounge." "Cooley accepted 85.6 percent of applicants, far and away the highest acceptance rate in the country," according to the publication.

In addition to Hannity and Trump, Cohen also represented former RNC Deputy Finance Chair Elliott Broidy, and allegedly arranged a $1.6 million hush payment to a former Playboy model who had an abortion after his client impregnated her in an extramarital affair.

But Bee quickly overruled the possibility of the Fox News star having a mistress, too. "No one would f**k you," she said, looking straight into the camera as she spoke to Hannity. "You must have done something so much worse."

With that, Bee implored the questionable ethics regularly used on Hannity's "news" show to lob a conspiracy theory of her very own: "Is Sean Hannity a serial killer?"

"Now, I know what you're thinking: You can't just throw together a bunch of scary buzzwords and out of context clips to support an outrageous conclusion," she paused to tell her audience. "And, normally I would agree with you, but you know who does that all the time? Sean Hannity."

A graphic behind Bee then showed six signs that a person could be a serial killer: bed-wetting, low self-esteem, average intellect, cruelty to animals, bad with women and obsession with fire. Then, through a deceitfully-spun web of editing, she reached an outrageous conclusion – and promised more would come.

"That is totally unedited footage of his madness. OK, well we did edit it," Bee conceded. "But only because the way he stokes resentment against people of color was just too scary."

At the conclusion of Bee's segment, the comedian seemingly accidentally connected the dots regarding why Hannity might have reached out to Cohen for legal advice in the first place. Does it really have to do with real estate, as the Fox News host has claimed? Watch the full segment below to analyze Bee's hypothesis for yourself.