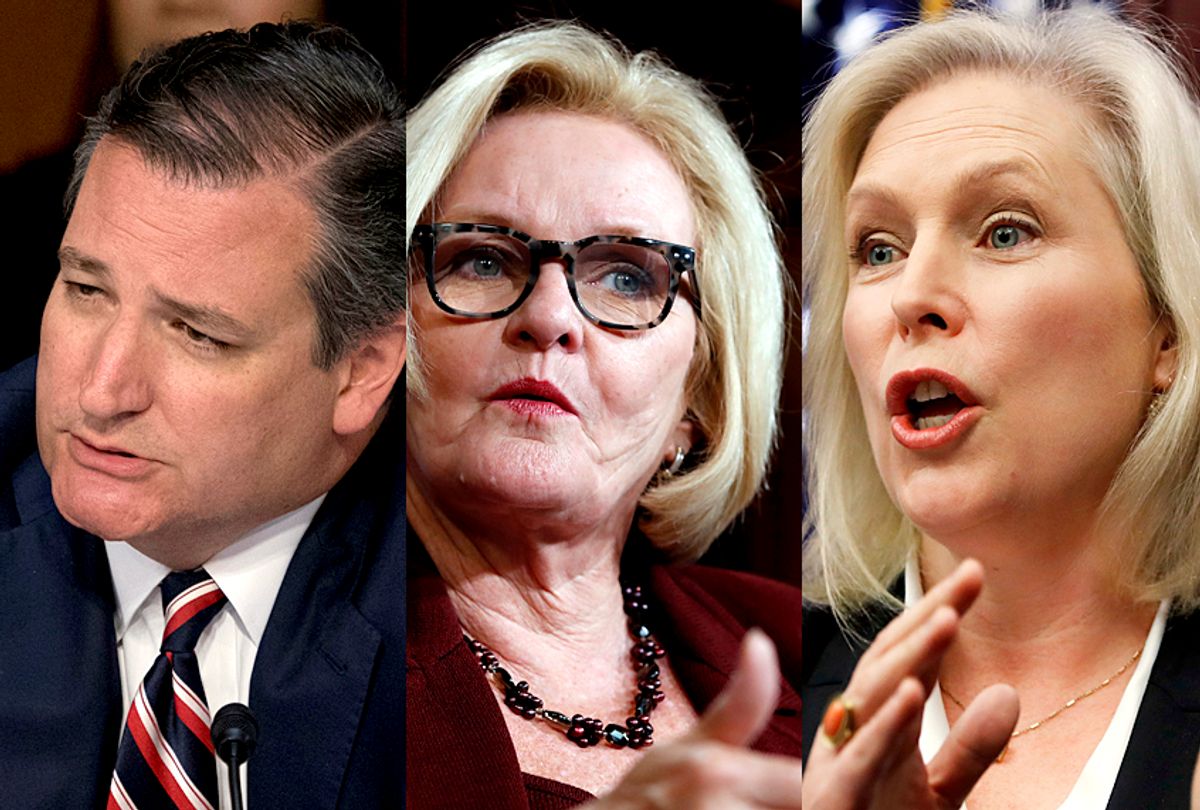 There are plenty of signs of the U.S. Senate’s immense dysfunction. But perhaps none was as alarming as seeing Sen. Ted Cruz, R-Texas, standing as the only male Republican to side with every male Democratic senator in support of revised sexual harassment legislation on Capitol Hill. Cruz’s stance as the odd man out is hardly new: He has developed a reputation as the senator most loathed by his colleagues, on both sides of the aisle. It is indicative, however, of a larger and more troubling trend of Republican recalcitrance, even as the party in full control of the federal government.

On his 100th day in office, President Trump congratulated himself for signing the most bills in that period of any president since Harry Truman — overlooking the substance, or lack thereof, of most of them. But by the end of Trump's first year, he had sunk down to signing the fewest bills for a first-year president since Dwight Eisenhower. After passing massive corporate tax cuts on a party-line vote late last year, the Party of No has grown even more obstructionist, refusing to compromise on a host of vitally important legislation, including bills that would directly benefit their own red-state constituents, "economic anxiety" and all.

Take, for instance, legislation that would remove restrictions which make it virtually impossible for the DEA to freeze suspicious opioid shipments. That bill is currently stalled in the Senate. Opioid overdoses claimed 115 lives per day in 2016, according to federal data. A disproportionate number of those deaths occurred in Trump-supporting middle America, and as a 2016 candidate, Trump declared the nation’s drug problem a “national emergency."

Trump has done very little since taking office to address the issue, other than nominating Rep. Tom Marino, R-Pa., as the nation's drug czar. It turned out that Marino had taken $134,000 in donations for his 2014 and 2016 re-election campaigns from the pharmaceutical industry, according to campaign finance website Open Secrets. He also sponsored the legislation that eventually resulted in pharmacies flooding small-town America with opioids.

Marino eventually withdrew from consideration, and to be fair, the Trump administration proposed a rule change on Tuesday aimed at strengthening the DEA's ability to go after drug distributors. But Republicans in the Senate are still dragging their feet on what would otherwise sound like a golden opportunity — the repeal of a law signed by Barack Obama.

Passed in 2016, the Ensuring Patient Access and Effective Drug Enforcement Act makes it more difficult for the DEA to temporarily suspend licenses of companies accused of failing to report suspicious orders of drugs. A blockbuster report in the Washington Post and on CBS’ “60 Minutes” last year revealed that the law — co-sponsored by Rep. Marsha Blackburn, R-Tenn., who’s now running to replace retiring Sen. Bob Corker — had responded to "a targeted lobbying effort" and deliberately "weakened the DEA's ability to go after drug distributors.” The Post explained:

Partially a function of what is known as the “revolving door” in Washington, D.C., after a successful stint of crackdowns that saw the shutdown of hundreds of pill mills across the nation, the DEA significantly slowed its efforts to stop the flow of prescription painkillers.

Despite the exposure of such corruption or, at best, inefficiency, the bill to repeal that legislation continues to languish in the Senate. The biggest reason is probably politics.

“I have tried to get Republican co-sponsors and for the life of me I can’t figure out why everyone’s afraid of this bill,” Sen. Claire McCaskill, D-Mo., told the Hill this week. The vulnerable Democrat is up for re-election in a state Trump won by 18 points in 2016, and that Republicans now see as a chance for a pickup that would virtually guarantee a continued Senate majority.

“It is hard to get one across the finish line if you don’t have some Republicans that are willing to help,” she explained in an interview with Washington Examiner earlier this month. It may not be coincidental that McCaskill faces a tough fight against a Republican who has had trouble raising money, despite having a major fundraiser hosted by Trump. A Mason-Dixon poll from early April found McCaskill leading by one point against Missouri Attorney General Josh Hawley, 45 percent to 44 percent.

Senate Republicans are also playing hardball with a bill that would put an end to taxpayer-funded workplace harassment settlements for politicians — presumably because the legislation is sponsored by a leading Democratic presidential contender for 2020. (That would be Sen. Kirsten Gillibrand of New York, an undisputed pioneer on this issue.)

Even after the Republican-controlled House passed a bipartisan bill in February to update rules on workplace and sexual harassment, first enacted more than 20 years ago, Senate Majority Leader Mitch McConnell has refused to bring a companion bill to a vote.

The Congressional Harassment Reform Act ends taxpayer-funded settlements for politicians and the “cooling off” requirement before employees can file a workplace harassment claim, among other things. It would also create an Office of Employee Advocacy on Capitol Hill. Despite his statements to the contrary, McConnell is reportedly the reason the legislation has stalled in the Senate. According to anonymous sources quoted by the Atlantic:

... McConnell had problems with a provision that would make individual members financially responsible for harassment and discrimination settlements against them. (Currently, members can use taxpayer dollars to handle such unpleasantness.) More specifically, McConnell was said to be more-or-less OK with putting members on the hook for harassment, but discrimination liability was too much for him to swallow. And so the omnibus left the station sans a reform package.

"I think we ought to pass it," Sen. Chuck Grassley, R-Iowa, a co-sponsor of the 1995 law that first applied workplace safety regulations to Congress, told reporters Thursday.

Last month, all 22 female senators — on both sides of the aisle — signed a letter urging the passage of the legislation and condemning the way Capitol Hill handles allegations of sexual harassment. They were joined this week in another letter by every male Democratic senator — and Ted Cruz.

Despite Cruz's surprising stand, Senate Republicans continue to block bills to help Americans that suffering from the opioid crisis and sexual harassment, for blatantly political reasons. If you want to know why the government response to these crises has been nonexistent, or why Republicans can't govern even with full control in Washington, look no further.