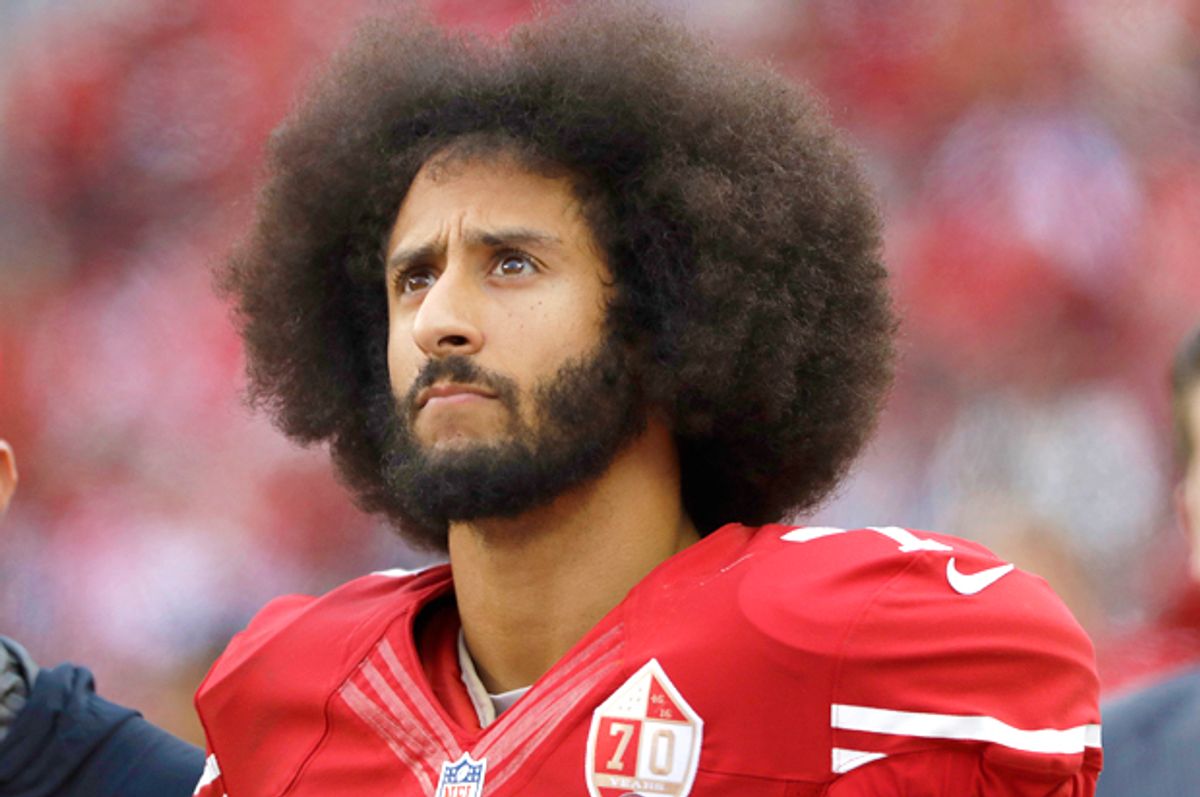 Ex-NFL quarterback Colin Kaepernick was honored with Amnesty International's Ambassador of Conscience Award for his public opposition to racial injustice and police brutality.

"The Ambassador of Conscience award celebrates the spirit of activism and exceptional courage, as embodied by Colin Kaepernick," Salil Shetty, Secretary General of Amnesty International, said in a statement. "He is an athlete who is now widely recognized for his activism because of his refusal to ignore or accept racial discrimination."

The statement continued, "Just like the Ambassadors of Conscience before him, Colin Kaepernick chooses to speak out and inspire others despite the professional and personal risks. When high profile people choose to take a stand for human rights, it emboldens many others in their struggles against injustice."

Kaepernick first took a knee during the national anthem to protest police brutality in America in 2016. The former NFL player has since become an activist, and has established his own charity known as the Colin Kaepernick Foundation. Through his organization Kaepernick "works to fight oppression around the world through education and social activism, including through free 'Know Your Rights' camps which educate and empower young people," according to Amnesty International's website.

The award is Amnesty International's highest honor, its website said. The achievement is for "recognizing individuals who have promoted and enhanced the cause of human rights through their lives and by example." He was presented the award by his former teammate, Eric Reid, who also joined in Kaepernick's protests and has since remained unsigned by an NFL team.

During his speech on Saturday, Kaepernick was grateful, but also emphasized that this was not an award he shared alone, but rather, with so many others.

"I would like to thank Amnesty International for the Ambassador of Conscience Award," he said. "But in truth, this is an award that I share with all of the countless people throughout the world combating the human rights violations of police officers, and their uses of oppressive and excessive force."

He continued, "To quote Malcolm X, when he said that he, 'will join in with anyone — I don’t care what color you are —as long as you want to change this miserable condition that exists on this earth,' I am here to join with you all in this battle against police violence. While taking a knee is a physical display that challenges the merits of who is excluded from the notion of freedom, liberty, and justice for all, the protest is also rooted in a convergence of my moralistic beliefs, and my love for the people."

The former San Francisco 49er became a free agent in March 2017, and has remained unsigned to a team since. He later filed a grievance against the NFL, in which he alleged that team owners have colluded to keep him out of the league, as Salon has previously reported.

Earlier this month he was scheduled to work out with the Seattle Seahawks, but was then abruptly canceled. ESPN's Adam Schefter reported that the reason was because Kaepernick refused to say he would stop kneeling during the anthem.

Pete Carroll, the coach of the Seahawks, has since seemed to suggest an opportunity still exists for Kaepernick to be signed.

ESPN's Jemele Hill, who faced backlash and a suspension after she called Trump a white supremacist on Twitter, expressed her support for Kaepernick's achievement, and said the league would one day be embarrassed for its actions.