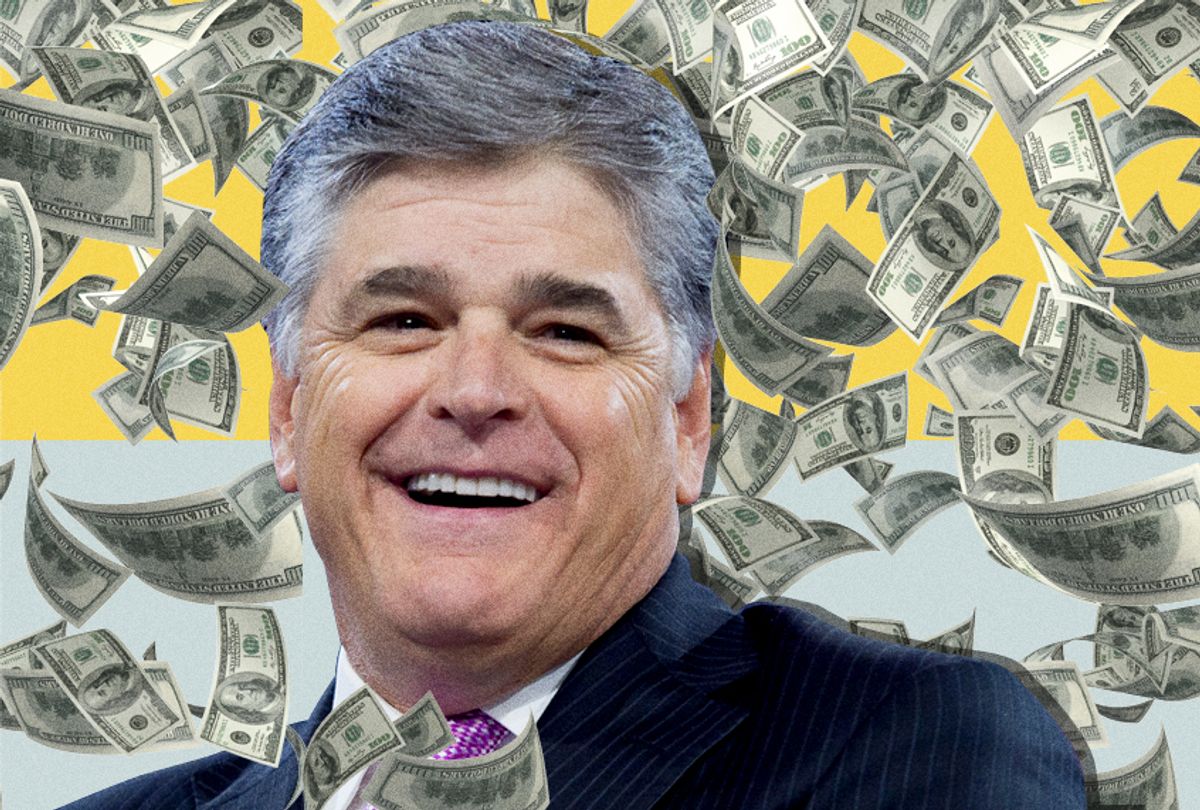 Fox News host Sean Hannity is responding to the "latest fake news attack" against him, playing the victim to claim that he is being vilified for "investing my personal money in communities that badly need such investment."

Despite his frequent rants against liberal or media "elites," an extensive report from The Guardian on Monday revealed that Hannity is linked to numerous shell companies that have spent at least $90 million on nearly 900 properties across the country. Furthermore, belying his supposed conservative principles, Hannity's empire was purchased at a deep discount to him and at a cost to taxpayers."[D]ozens of the properties were bought at a discount in 2013, after banks foreclosed on their previous owners for defaulting on mortgages," the paper reported.

According to public records, the properties were purchased by limited liability companies (LLCs) connected to Hannity in states including Alabama, Florida, Georgia, New York, North Carolina, Texas and Vermont. "Hannity is the hidden owner behind some of the shell companies and his attorney did not dispute that he owns all of them," the Guardian reported.

A portion of the properties Hannity acquired were "with support from the Department for Housing and Urban Development (HUD), a fact he did not disclose when praising Ben Carson, the HUD secretary, on his television show last year," the Guardian reported. The Fox News host and close Trump confidante got $17 million in HUD loans to buy the biggest property in his foreclosure empire.

Not surprisingly, Hannity has pushed back against the report and deemed it all to be a "fake news attack," but he did not deny that he had several real estate deals.

"It is ironic that I am being attacked for investing my personal money in communities that badly need such investment and in which, I am sure, those attacking me have not invested their money," Hannity wrote in a statement on his website. "The fact is, these are investments that I do not individually select, control, or know the details about; except that obviously I believe in putting my money to work in communities that otherwise struggle to receive such support."

The Fox News host denied any role or involvement in HUD investments.

"I have never discussed with anybody at HUD the original loans that were obtained in the Obama years, nor the subsequent refinance of such loans, as they are a private matter," a statement on his website continued. "I had no role in, or responsibility for, any HUD involvement in any of these investments. I can say that every rigorous process and strict standard of improvement requirements were followed; all were met, fulfilled and inspected."

One of the most valuable purchases Hannity made was in Georgia and involved "two large apartment complexes" which he bought for $22.7 million, the Guardian reported. "The developments are in the cities of Perry and Brunswick, which have higher poverty rates and lower median incomes than the U.S. averages."

The report added, "One- and two-bedroom units in Hannity‍‍‍’s apartment complexes are available to rent for $735 to $1,065 per month, according to brochures." HUD helped Hannity receive $17.9 million in mortgage loans to fund the purchases, which were insured under a program in the National Housing Act.

In all, Hannity's portfolio consists of 877 residential units that cost about $89 million. Seven other properties purchased by the companies were later sold for over $4 million.

Hannity has made a career out of tapping into conservative and far-right rage towards liberalism, the media and "elites," but he reels in a $36 million annual salary and eats up foreclosed homes at a discount so he can turn a profit.

Regardless, he previously railed against former President Barack Obama for the foreclosure rate in the U.S., the Guardian noted.

In September 2016, Hannity railed against the luxurious lifestyle enjoyed by his contemporaries in the media who he dubbed "elites," seemingly ignoring his own private financial ventures.

"My overpaid friends in the media, well, they have their chauffeur-driven limousines, they like their fine steakhouses and expensive-wine lifestyles," Hannity said at the time. "None of them are feeling this, the people you’re watching on TV, and therein lies the contempt."

The Fox News and radio host makes in the neighborhood of $30 million per year.

Hannity also once used his private jet to fly Newt Gingrich to meet with Trump when Gingrich was considered as a potential vice presidential candidate.

Hannity has come under fire as of late after his connection to President Donald Trump's personal lawyer, Michael Cohen, was revealed in court. Fox News has stood by Hannity, despite the fact that he has repeatedly defended Cohen without having disclosed he was a client of his. The Fox News host has said his dealings with Cohen were strictly related to real estate ventures.

He did have some defenders in right-wing media after his investment dealings were revealed:

But others, including some in conservative media, were quick to note the blatant gulf in Hannity's public agitations and his personal practice.

"I think it's funny Sean Hannity turns out to be a welfare queen for HUD, having taken advantage of guarantees that were put forward by none other than the Obama administration," conservative pundit Brett Stephens observed on MSNBC on Monday.