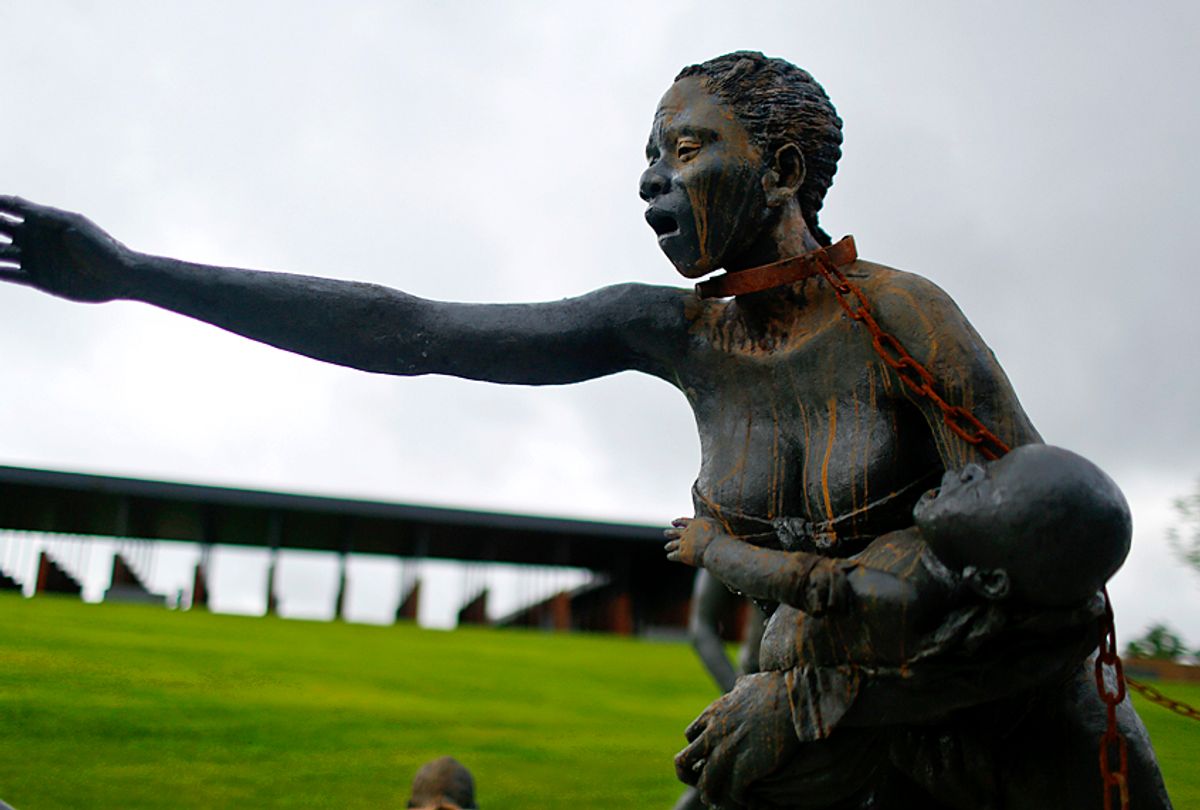 The National Memorial for Peace and Justice honoring thousands of people killed in racist lynchings is seen. (AP/Brynn Anderson)
--

A new museum is opening in Alabama to expose visitors to the horrors of slavery, lynching and life in the Jim Crow era of the Southern United States.

The Legacy Museum, which includes a memorial called The National Memorial for Peace and Justice, has opened in Montgomery, Alabama, to showcase the history of racism in the South. The Equal Justice Initiative, which helped organize the project, documented the lynchings of more than 4,400 African-Americans from 1877 to 1950, in order to better inform the exhibit.

One of the most notable aspects of the exhibit is that it visually represents the horrors of racial oppression throughout American history. When visitors first walk into the memorial, they see a sculpture depicting men and women in collars and chains as they arrived in the United States for the first time as slaves. When visitors reach the main display, they see more than 800 six-foot steel monuments. Each one represents a county in the United States where at least one lynching occurred between the end of Reconstruction and the beginning of the second half of the 20th century. Lynching victims' names are engraved on the monuments, and some of them include a description of what caused the victim to be lynched.

Reasons ranged from "frightening" a white girl to asking an employer for higher wages. The descriptions exist to point out that African-American lives had so little value that even a white person's most minor grievance could carry a capital penalty if you were black in the United States.

EJI Executive Director Bryan Stevenson told AL.com that the exhibit was created in order to establish a dialogue about America's racist history.

He added, "The whole point of lynching was to raise up this violence. They wanted the entire African-American community to see the battered, bloody bodies that they had destroyed."

Historians have expressed concern in the past that lynching is a poorly understood subject among modern Americans. As African-American studies professor Bridget R. Cooks observed in 2008, "the majority of my students learn about lynching for the first time in one of my courses, at a private Jesuit university in California dedicated to social justice as a guiding ideal." She also noted those students were so underserved in their knowledge about the history of lynching that many of them expressed difficulty understanding how people could have been lynched based on trivial offenses or how white Southerners could get dressed in their best clothes and happily attend a lynching as if it was a casual, amiable social event.

"The responses indicate students’ differing levels of knowledge about lynching and their desire to know more about it," Cooks wrote.

More than a decade later, Stevenson also pointed out that, much as African-American lives today are frequently regarded as less important than the whims of white people, black people could be murdered during the Jim Crow Southern for virtually any reason.

"It could be the most minor social transgression. Knocking on the front door of a white woman. Not calling a police officer mister. Walking behind your employer's wife. Asking for higher wages as a sharecropper," Stevenson told AL.com.

The great-granddaughter of an African-American man who was lynched for writing letters to a white woman, and then being released from prison for it due to a lack of evidence, described why she felt the issue was so important.

"We forget the human element that the people who were murdered were people and they were scared. And they knew that they were losing their lives. The families were upended. It impacted the families. There is such a human cost and human connection of lynching that I don't think we've done a good job of explaining. I believe that is what the museum and the memorial is going to do," Shirah Dedman told AL.com.

The museum doesn't merely focus on explaining racial history, however. It also makes the argument that a direct line can be drawn from slavery, to lynching and segregation, all the way to the current mass incarceration of racial minorities by America's prison-industrial complex.

The memorial is more relevant because of Donald Trump's election. While modern presidents have made a point of at least paying lip service to the idea that white supremacism is abhorrent, Trump has stirred up controversy by defending individuals and political movements that openly embrace white supremacist views.

Later during the press conference, Trump said that both sides were equally to blame for the violence, arguing that "I think there's blame on both sides" because "you also had people that were very fine people, on both sides."

Perhaps the most astute observation about why Americans need to be informed about their nation's racist roots came from writer Ta-Nehisi Coates, who wrote in October that Trump's election occurred largely due to white supremacism. As Coates noted, racist oppression has always been inextricably linked to other issues, making it necessary to look at race as well as those other factors in order to disentangle and thus better understand these social phenomena.

"The history of slavery is also about the growth of international capitalism; the history of lynching must be seen in light of anxiety over the growing independence of women; the civil-rights movement can’t be disentangled from the Cold War. Thus, to say that the rise of Donald Trump is about more than race is to make an empty statement, one that is small comfort to the people—black, Muslim, immigrant—who live under racism’s boot," Coates wrote.

The hope embodied in this memorial and museum — despite the cruel past that it chronicles — is that it will send the message that kindness and respect for other human beings, rather than cruelty, will be the wave of the future.

Looking forward to a better future is something that Bryan Stevenson hopes people will take out of visits to the museum.

"I think there is a better America still waiting. There is a more just America still waiting," Stevenson told the Associated Press. "There’s a kind of community that we haven’t achieved yet,but we can’t achieve it if we are unwilling to tell the truth about our past." He compared the mission of the exhibit to those of comparable exhibits in South Africa and Germany that help those nations come to grips with their own histories involving Apartheid and the Holocaust, respectively.