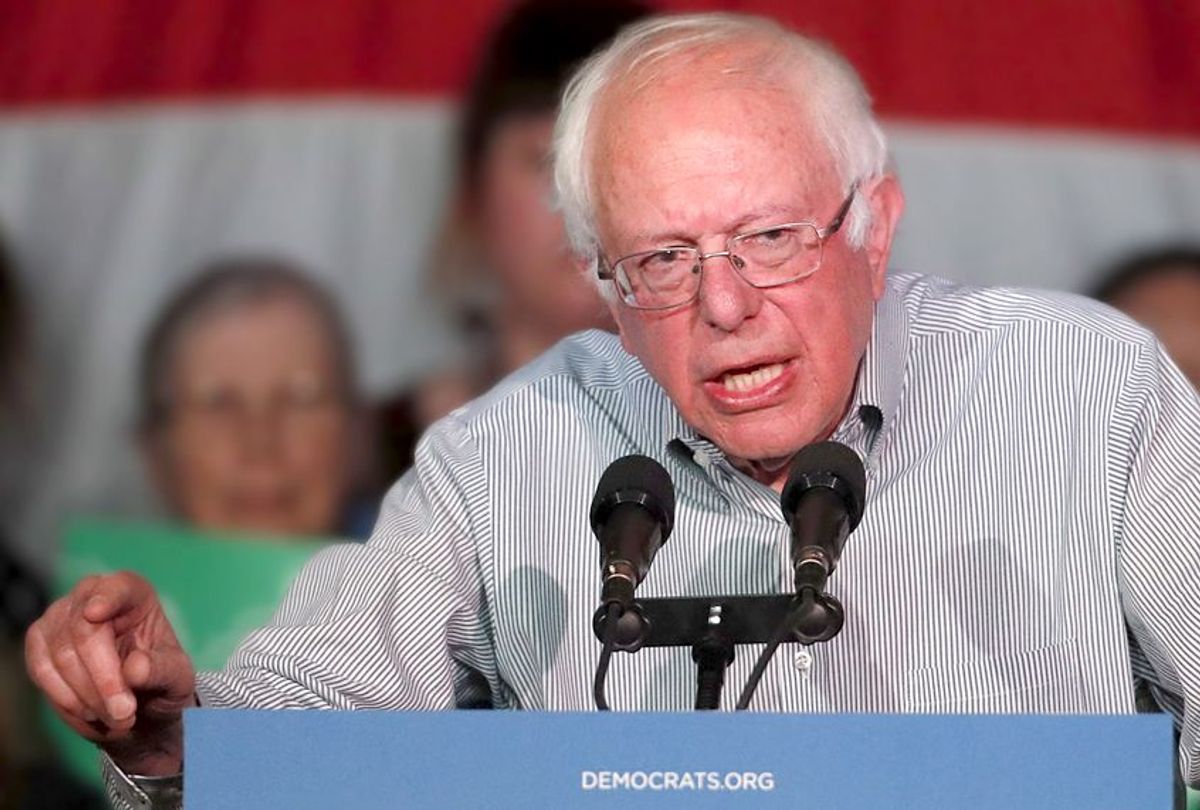 You have to hand it to Sen. Bernie Sanders (I-Vt.): he's persistent. Now, reports have surfaced that Sanders is preparing to release a plan that would guarantee a job for every American.

According to the Washington Post report, Sanders’ federal proposal will encompass every American “who wants or needs [a job],” with a guaranteed minimum pay of $15 an hour and health-care benefits.

Channeling the New Deal, Sanders's plan would fund projects across the country, and be part of a bigger vision that seeks to tackle issues including infrastructure, education, environmental issues and more.

A representative from Sanders’ office told the Post that planning for what is being called a “jobs guarantee program” is still in its early stages, and the way in which it will be funded has yet to be determined.

According to the report, more details from an early draft are the following:

“Under the early draft of Sanders's job guarantee, local, state and American Indian tribe governments in every section of the country would send proposals for public works projects for their areas to 12 regional offices that encompass the country. These 12 regional offices would act as a clearinghouse for these projects, tasked with sending recommended projects to a new national office within the Labor Department office for final approval.

Once approved, the projects would hire workers at a minimum salary of $15 an hour with paid family and medical leave, and offer the same retirement, health, and sick and annual leave benefits as other federal employees.”

“The goal is to eliminate working poverty and involuntary unemployment altogether,” Darrick Hamilton, an economist at the New School, told the Washington Post. “This is an opportunity for something transformative, beyond the tinkering we've been doing for the last 40 years, where all the productivity gains have gone to the elite of society."

Sen. Cory Booker, D-NJ, has also announced that he will introduce a separate legislation “that seeks to establish a model federal jobs guarantee program in up to 15 high-unemployment communities and regions across the United States,” according to the announcement.

“The federal jobs guarantee is an idea that demands to be taken seriously. Creating an employment guarantee would give all Americans a shot at a day’s work and, by introducing competition into the labor market, raise wages and improve benefits for all workers,” Booker said in a statement. “My bill will seek to create a model federal jobs guarantee program by piloting it in up to fifteen high-unemployment communities across the country. Not only would this have a positive impact on the lives of potentially hundreds of thousands of Americans right away, but the valuable data gathered would help us learn lessons, assess its effectiveness, and perfect the idea.”

The idea for many leftists seems visionary: if America were to build a society where everyone is guaranteed a job, an income, and health benefits—jobs that were contributing to the greater good of society—there would surely be less suffering, socially and economically. The idea also overlaps with the ideology of Universal Basic Income, which one up and coming politician has been advocating for: Michael Tubbs, as recently reported by Politico.

Tubbs is a 27-year-old mayor of Stockton, California, who has launched a universal basic-income pilot program which will give dozens of low-income families $500 a month for a year, and will measure the social and economic impact on the program.

“There’s this interesting conversation we’ve been having about the value of work,” Tubbs told Politico. “Work does have some value and some dignity, but I don’t think working 14 hours and not being able to pay your bills, or working two jobs and not being able—there’s nothing inherently dignified about that.”

Tubbs raises a good point, one that has recently been echoed in Jeffrey Pfeffer’s new book, “Dying for a Paycheck." Pfeffer, who is a Professor of Organizational Behavior at the Graduate School of Business, examines the toxic way in which a majority of the world approaches work. A swift Google search on “studies on how work is killing Americans” will find plenty to validate the theory that Americans are overworked and overstressed.

Sanders has long been an advocate of similar social welfare policy ideas, including Medicare For All, a universal healthcare policy initiative he championed during the 2016 election. Sanders’s ideas, once considered to be too progressive for traditional Democrats, have been held to a new resolve by some in the blue party. Rep. Keith Ellison, D-Minn., said in March that his party was slowly uniting around the issue of Medicare For All.

Critics are weighing in with strongly opposing opinions. Adam Ozimek, a senior economist at Moody's Analytic, wrote in Forbes that the idea of a jobs guarantee program is “absurd.”

“Here is my argument: nationalizing a quarter or more of the labor market is such an obviously bad and absurd idea that it's more interesting to talk about what it's [sic] popularity is saying than actually debate the economics,” he wrote.

However, as The Guardian recently reported, if America were to implement such a program, it wouldn’t be the first: President of South Korea Moon Jae has pledged to create 810,000 public sector jobs over five years — such as teaching jobs, police, and social workers.

“A jobs guarantee would likely boost wages in the private sector, where consolidation has killed competition and monopolies dominate the landscape. Competing with the government, the private sector would feel pressure to increase pay and benefits,” Ross Barkan wrote in The Guardian.

Sanders’s office hasn’t released an official statement yet, but he has in the past discussed his stance on Universal Basic Income, and nodded to why he’s been a long advocate of not cutting social security benefits, universal healthcare, free education, and increasing minimum wage in the America.

The jobs guarantee program takes many of the causes he has been championing and ties them up in a neat bow.