As Diamond and Silk testify before Congress, GOP's victimization complex goes off the rails

Turns out Diamond & Silk were paid by Trump campaign; meanwhile, the GOP paints them as victims of censorship 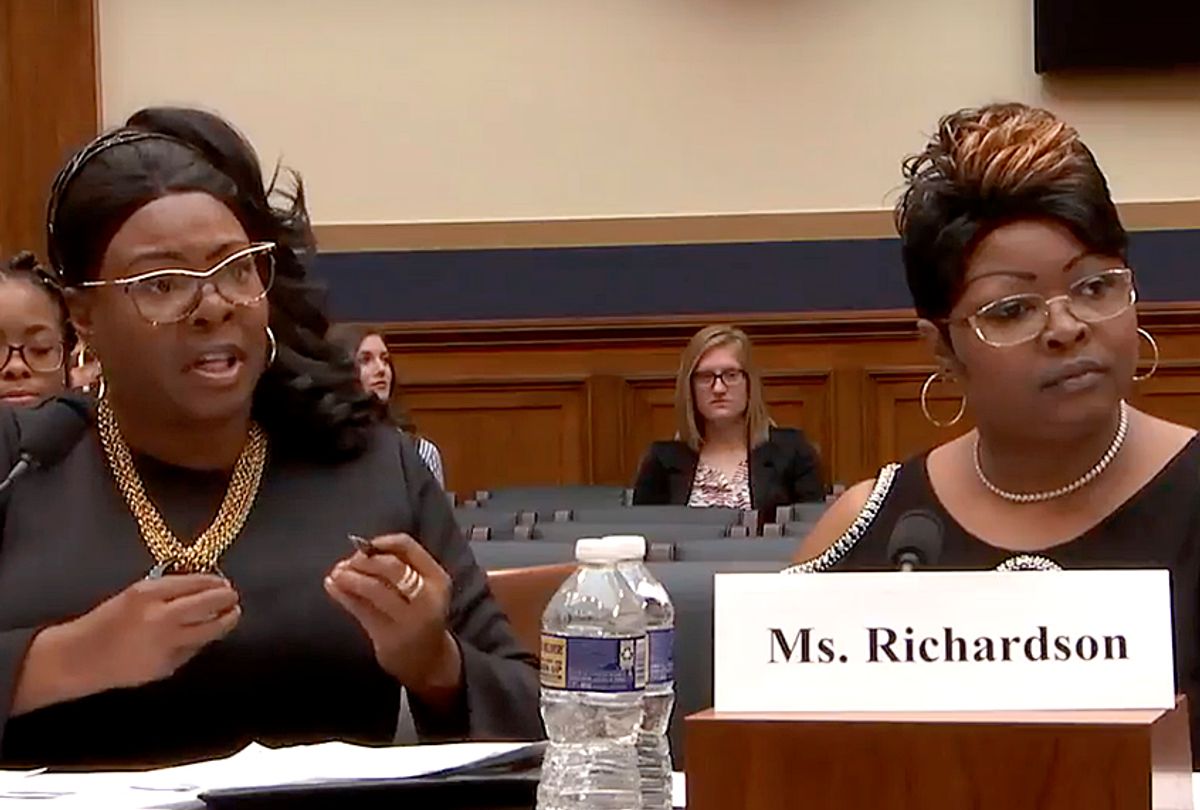 This morning, conservative video bloggers Lynnette "Diamond" Hardaway and Rochelle "Silk" Richardson gathered with Republican lawmakers on Capitol Hill for a hearing before the House Judiciary Committee. The topic of discussion that brought everyone together, with other fellow conservative bloggers, was whether or not Silicon Valley media companies – including Facebook, Twitter and Google — had been censoring their right-leaning web content.

Representatives from Facebook, Google and Twitter reportedly declined an invitation to testify, according to the Washington Post. Such a move reportedly prompted Rep. Bob Goodlatt, R-Va., to threaten further action to get their attention, saying Congress would “pursue whatever means necessary.”

According to the Washington Post report, the three-hour hearing got heated—and Diamond and Silk yelled at lawmakers who questioned them and their motives. The duo claimed they were being censored by Facebook, under oath.

"Mark Zuckerberg testified before Congress and stated that the most important thing he cared about was making sure no one interferes in the 2018 elections," Hardaway said during her testimony. "But after doing our research we wondered if Mark Zuckerberg was using Facebook to interfere in the 2018 elections by labeling users' accounts as either Liberal, Very Liberal, Moderate, Conservative or Very Conservative."

Hardaway continued to explain, in her opinion, that such a tactic is a strategy of censorship.

“So if I’m labeled as Very Liberal without the option to edit, update and correct this setting, then Algorithms are already put into place which allows advertisers that have Liberal views, services and causes to target me,” she said.

Diamond and Silk,  who are two vocal Trump supporters, also alleged during the testimony that Facebook sent them a message saying that their Facebook page — which has over 1.6 million followers — was “unsafe to the community.”

“We was sent an email where Facebook deemed us “Unsafe To The Community” but what’s unsafe are these social media sites turning their platforms into political playgrounds,” Hardaway said in her testimony.  “We are not unsafe. We are not hate speech. We are not terrorist. These labels have tarnished our brand and defamed our character.”

According to The Post, Facebook said that message was inaccurately depicted by the bloggers. The social media giant reportedly reached out to them to fix the problem, and Zuckerberg, when pressed for comment on the issue in his congressional hearings, said repeatedly it was a mistake.

Hardaway continued to explain that they are “requesting that all algorithms and any bias tactics used to silence, suppress and censor voices be remove from all pages and platforms.”

Many have speculated that Diamond and Silk's claims to being censored were a hoax. As BuzzFeed as previously reported, Diamond and Silk is part of Young Conservatives LLC network; websites affiliated with Young Conservatives LLC are reportedly “ using an increasingly popular tactic of quickly hopping from one domain name to another in order to blunt the impact of Facebook’s recent News Feed algorithm changes."

"This is a stupid and ridiculous hearing," Rep. Ted Lieu, D-Calif., said, according to CBS.

"Why are we having a hearing about regulating content?" Lieu asked. "It's unconstitutional to begin with."

Hardaway also reportedly denied being paid by the Trump campaign, even though Federal Election Commission records show they received $1,274.94 for field consulting work. Rep. Hakeem Jeffries, D-NY, questioned them about the report. Diamond and Silk said the payment was a reimbursement. Some political commentators speculated that the pair had lied under oath about the payment, as they appeared confused and in denial at first.

The discussion between Jeffries and Diamond and Silk got so heated that Rep. Jeffries finally said, “I respect your game, I really do."

Republican lawmakers have once again come to their defense on social media.

Praise from GOP legislators echoed throughout the hearing; according to Politico, Rep. Marsha Blackburn, R.-Tenn., painted Diamond and Silk as victims.