West Virginia Senate candidate Don Blankenship, an ex-convict and Trump loyalist, hits what may be a new low 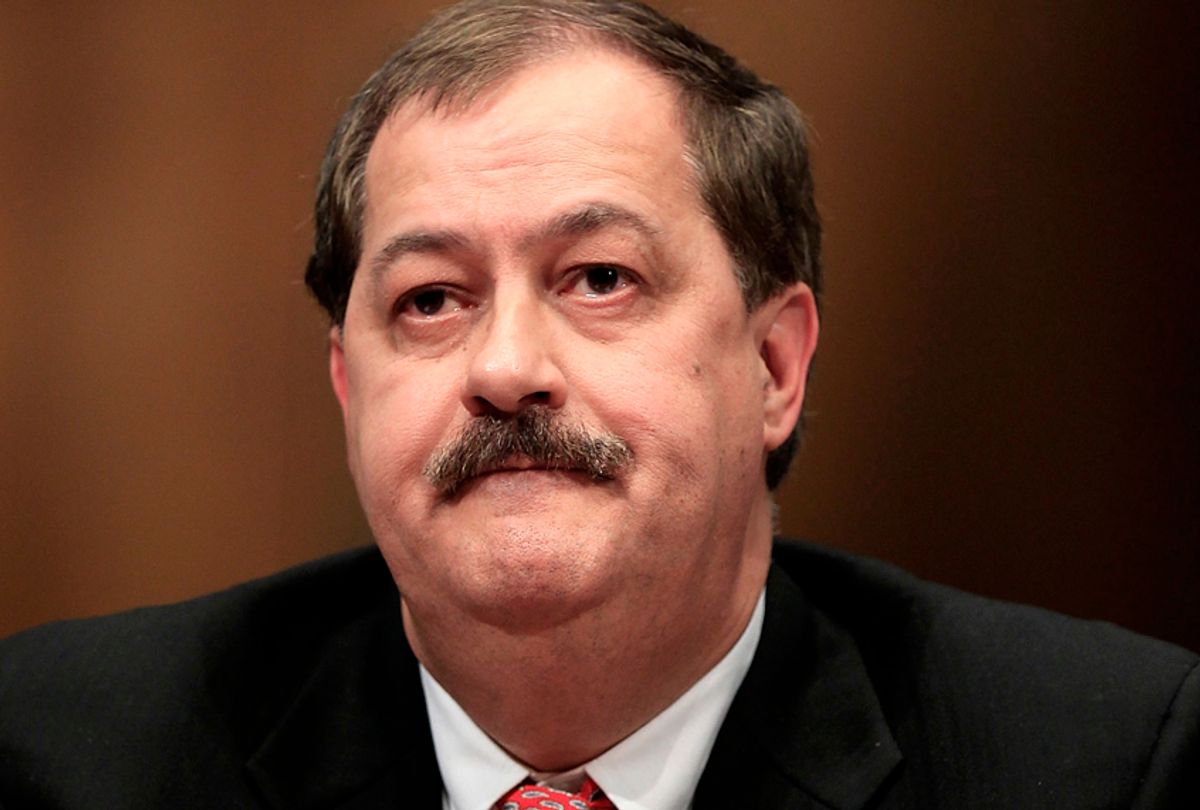 Don Blankenship, the disgraced former coal executive seen as a leading candidate in the West Virginia Republican Senate primary, has used an ethnic slur to refer to the wife of Senate Majority Leader Mitch McConnell.

In response to a series of attack ads that have been released against Blankenship by a Super Political Action Committee, Blankenship claimed that McConnell's wife — Secretary of Transportation Elaine Chao — is the daughter of a "wealthy Chinaperson" and claimed "there’s a lot of connections to some of the brass, if you will, in China," according to the New York Times. He also claimed, "I read in books that people think he's soft on China," apparently referring to McConnell.

There are two conspicuous details of Blankenship's attack on McConnell's wife that are worth noting. First is that Blankenship himself has a number of connections to China, including some that are potentially compromising. Setting aside the fact that his own fiancée was born there (Farrah Meiling Hobbs), Blankenship infamously admitted during a recorded telephone conversation in 2009 that he was thinking of moving to China and expressed admiration for its repressive government, which he described as "dictatorial capitalism." He particularly singled out the lack of government regulation over the economy.

"I’m actually considering moving to China or somewhere and being more like George Washington if I can get citizenship. I can probably get citizenship in India. I’d rather be in China," Blankenship said. He also said he would consider dual citizenship.

"Americans confuse the words communism and dictatorship," Blankenship continued. "The Chinese are running a dictatorial capitalism and it’s very effective. That’s the way corporations are run. Corporations are not a democracy."

Yet Blankenship's attack on McConnell's wife most likely had little to do with the West Virginia candidate's genuine feelings about U.S.-China relations. It was probably a response to attack ads that a super PAC linked to McConnell has been running against him, which claim that his former West Virginia coal mining operations had poisoned local drinking water. Establishment Republicans have also not been shy about drawing attention to Blankenship's biggest past controversy — namely, his conviction for charges relating to negligence after the deaths of 29 coal miners during a 2010 explosion.

That incident remains one of the most infamous in recent West Virginia memory. After the explosion at Blankenship's Upper Big Branch coal mine, scientists determined that the facility had not used crushed limestone at more than 1,500 locations throughout the mine. Crushed limestone is necessary to neutralize coal dust in mines, which can build up and become explosive if precautions aren't taken to keep it in check.

Although the clear consensus was that Blankenship's greed and negligence directly contributed to the explosion — he served one year in prison after being convicted on a misdemeanor charge of conspiring to violate mine safety standards, and remains on parole until the day after the primary election — Blankenship insists that he was convicted because of political persecution by the Obama administration.

The attack ads by McConnell's super PAC may be working. On Monday evening, a poll was released by GOPAC which found that Blankenship now trails far behind his two main rivals for the Republican nomination, according to Politico. West Virginia Attorney General Patrick Morrisey is in the lead with 24 percent, followed by Rep. Evan Jenkins with 20 percent and Blankenship with 12 percent. The survey has a margin of error of 4.9 percentage points, still not enough to put Blankenship in contention.

For their own part, Democrats have been trying to influence the primary election by turning it against Jenkins. An outside Democratic group known as Duty and Country has spent $380,000 on TV ads largely aimed at the conservative congressman. Jenkins has argued that Democrats were doing this because "they’re scared to death of Evan Jenkins on the ballot in November" against vulnerable incumbent Sen. Joe Manchin, one of this year's most vulnerable Democrats, according to Politico.

Blankenship's scandals and sagging polling numbers aren't the only impediments to his electoral success. It now appears that Blankenship's primary residence isn't even in West Virginia but thousands of miles away in Nevada. He lives in a $2.4 million villa near Las Vegas with an infinity pool and palm trees, according to The New York Times. As the Times describes it:

It is a six-bedroom, eight-bath Spanish-style mansion with marble floors and a dolphin sculpture beside the pool, according to an online real estate site. (He also owns a residence in West Virginia.)

Blankenship dismissed the idea that he could be described as a carpetbagger by claiming that "many people have two homes. Most coal miners now have one in Tennessee and one in West Virginia."

Although Blankenship's political fortunes seem to be waning, the Republican establishment is unlikely to ease up on him until it feels certain he won't be the party's standard-bearer. Their investment in tipping the scales against Blankenship, at risk of reinforcing his narrative of being an "anti-establishment" candidate and Donald Trump loyalist, is politically understandable. The Republican Party has had a long history in the 2010s of nominating unelectable candidates in races that looked highly winnable: Christine O'Donnell in Delaware and Sharron Angle in Nevada in 2010, Richard Mourdock in Indiana and Todd Akin in Missouri in 2012 and, most recently, Roy Moore, during the special election in Alabama last year.

Because West Virginia is a now a solidly conservative state, Republicans have long believed that Manchin's seat is one of their few chances for a pickup in an electoral climate that is expected to be favorable to the Democrats overall. The campaign to undermine Blankenship is being pursued as a mandate not to squander that opportunity.

Blankenship, unsurprisingly, has responded to the opposition from McConnell and others in the GOP establishment by promising to oppose McConnell's role as Senate Republican leader if he is elected in November.

"He needs to understand that if I'm there I will not vote for him for majority leader, and so the rest of the senators should understand that they should not put him up if they need my vote," Blankenship told reporters, according to Politico.