NRA takes heat for banning guns at their annual meeting 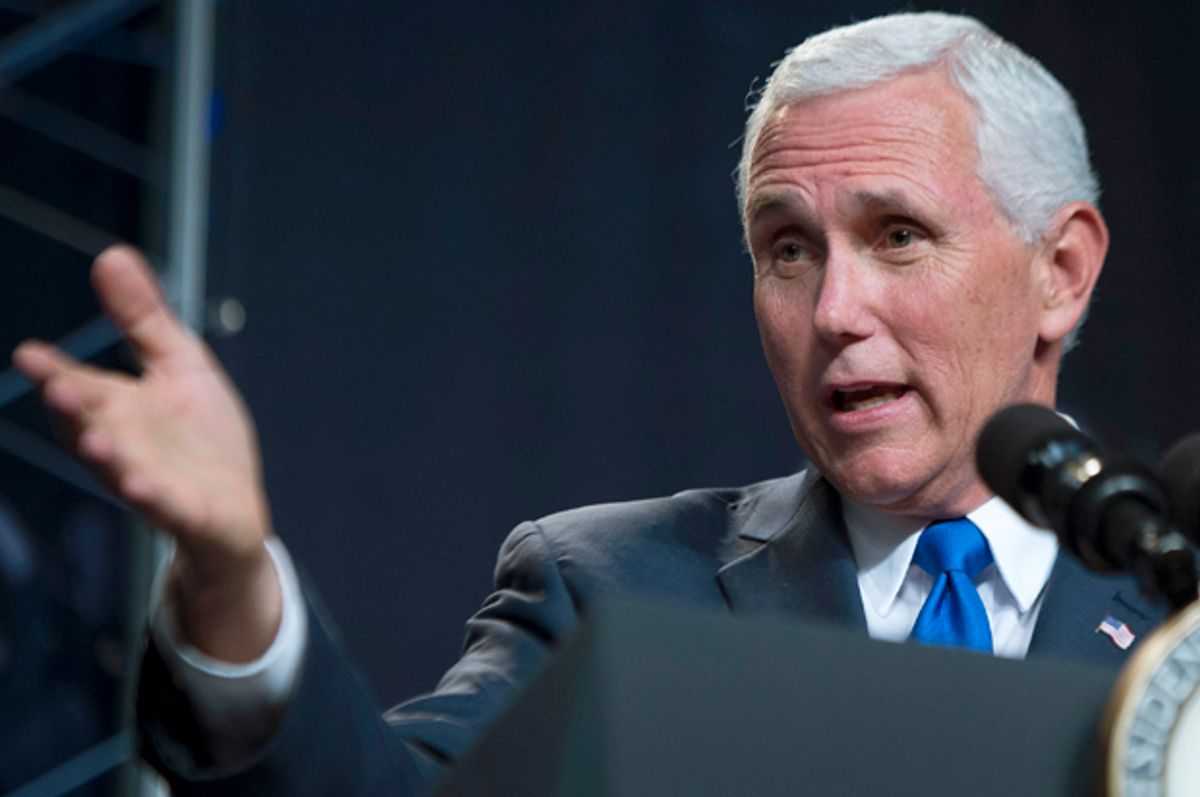 The NRA is banning firearms from a speech to be delivered by Vice President Mike Pence at their annual meeting, sparking outcries of hypocrisy by the Parkland high school students who survived a mass shooting in February.

At the source of the outrage is the fact that the Secret Service does not allow firearms to be present for events in which their protectees are going to be present and at the center of attention, according to The Washington Post. As a result, and in order to comply with the federal laws regarding Secret Service authority on these issues, the NRA is going to ban firearms from the arena where Pence is speaking, while he is present.

As the NRA explained, "firearms and firearm accessories, knives or weapons of any kind will be prohibited in the forum prior to and during his attendance." Agency spokesman Shawn L. Holtzclaw also told the Post that "individuals determined to be carrying firearms will not be allowed past a predetermined outer perimeter checkpoint, regardless of whether they possess a ticket to the event."

While the NRA doesn't have any control over disarming its own members for Pence's speech, they could disinvite the vice president on the grounds that requiring their members to not carry firearms flies in the face of their notion that "a good guy with a gun" can always be trusted. The Post itself noted how many NRA members are reacting to this by posting choice quotes from the Texas CHL Forum, a message board for gun owners:

"Obviously even republicans and so called leaders don’t trust the ‘good guys.’ I realize it’s the VP, but still makes our whole argument look foolish," a commenter who self-identified as an NRA member said Thursday.

"You may disagree . . . but in my opinion the very people that claim to protect the 2A should never host an event that requires disarming the good guys. Sad. No excuses for this . . . it makes us look stupid," the commenter said.

Another self-identified NRA member agreed, saying Friday: "Me personally, I won’t be listening to him speak. I won’t be going anywhere that I cant carry my firearm. It’s essentially the nations largest get together for gun owners and they won’t let law abiding legal gun owners carry guns because someone who’s supposedly pro 2A thinks its too ‘dangerous’? thats liberal logic right there."

The BBC also found some choice comments from the message board that supported the NRA's decision to keep Pence as a speaker:

"Come on guys- the President and Vice-President aren't "regular guys" . . . and should not be expected to do what we do," said one user.

"Expecting them to speak at a large gathering of armed, UNVETTED people with no checks on their background or mental state is literally the dumbest thing I have read on this forum in a while."

Many of the survivors from the mass shooting at Marjory Stoneman Douglas High School in Parkland, Florida are also drawing attention to the hypocrisy of the NRA's decision to keep Pence as a speaker, despite the Secret Service's demands.

"The NRA has evolved into such a hilarious parody of itself," Parkland survivor Cameron Kasky wrote on Twitter, according to CBS News.

Fred Guttenberg, the father of a 14-year-old named Jaime Guttenberg who died in the February shooting, wrote that "on so many levels, this is enlightening. According to the NRA, we should want everyone to have weapons when we are in public. But when they put on a convention, the weapons are a concern? I thought giving everyone a gun was to enhance safety. Am I missing something?"

"Wait wait wait wait wait wait. You're telling me to make the VP safe there aren't any weapons around but when it comes to children they want guns everywhere? Can someone explain this to me? Because it sounds like the NRA wants to protect people who help them sell guns, not kids," Deitsch wrote.

Of course, part of the problem is that the pro-gun arguments have never really been about "good guys with a gun" or about protecting the Second Amendment. They have, instead, been rooted in an extreme right-wing anti-government ideology that was popularized by the NRA after it was taken over by ideological elements in the 1970s. Its underlying assumption is that the government wishes to become a tyranny and hopes to achieve that goal by disarming its own citizenry.