House Republicans turn the heat up on Rod Rosenstein, draw articles of impeachment 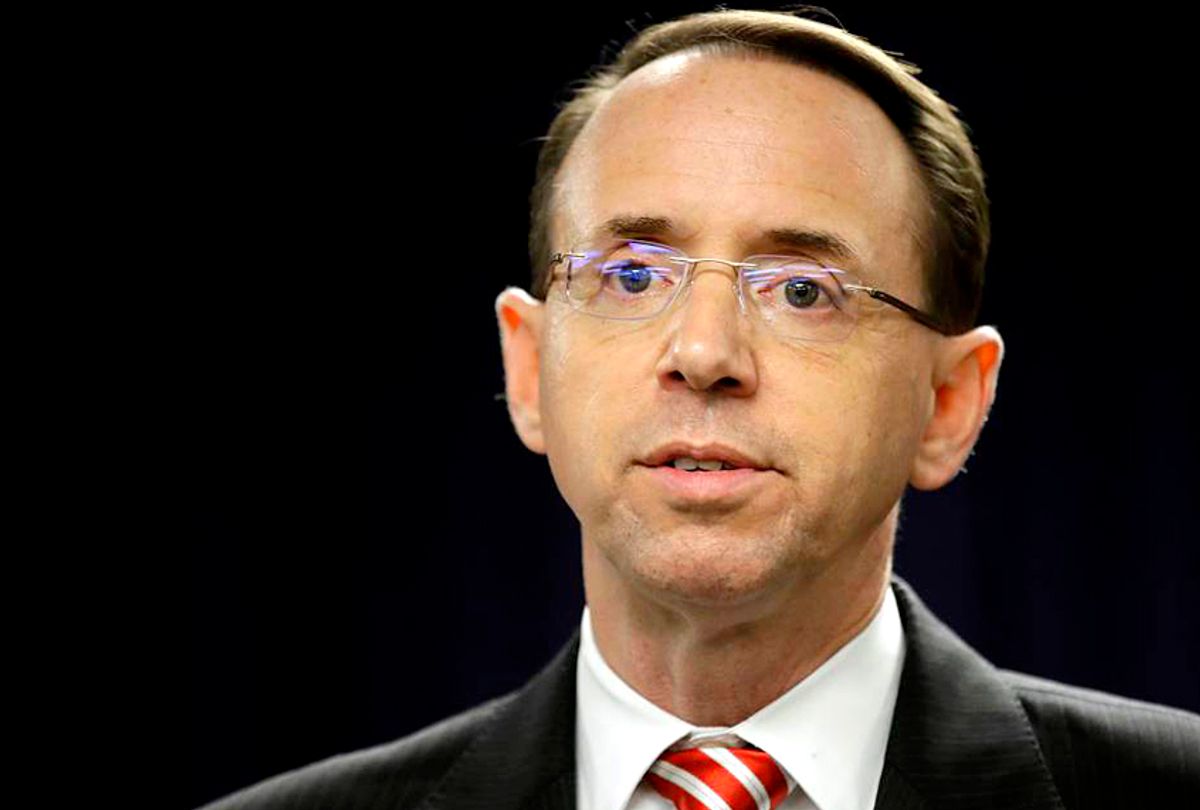 A group of House Republicans is threatening to impeach Deputy Attorney General Rod Rosenstein, a move that critics claim is an attempt to attack the ongoing probe by special counsel Robert Mueller into potential collusion between President Donald Trump's 2016 campaign and Russian officials.

Rep. Mark Meadows, R-N.C., the chairman of the conservative House Freedom Caucus who finalized the draft of the impeachment articles, told The Washington Post that he and his colleagues had "frustrations about their inability to respond to simple requests [that] could warrant further action," referring to the Department of Justice and its cooperation with the committee on questions such as the surveillance of former Trump campaign adviser Carter Page. Conservatives have criticized that surveillance by claiming that it was based on information obtained through research funded by Hillary Clinton's presidential campaign. (The warrant applications had to be approved by multiple judges before they were put into effect.)

Although Meadows insisted to the Post that the one-page document is merely "a last resort option if the Department of Justice fails to respond," it is impossible to separate the impeachment threat from broader Republican efforts to derail the Mueller investigation.

While House Republican leaders like Speaker Paul Ryan have argued that Rosenstein and Mueller should be allowed to do their jobs unimpeded, many hardline conservatives have tried to aggressively attack them as a means of undermining their credibility. This was evidenced by the content of the articles of impeachment, as summarized by the Post:

The conservatives’ outline, which is divided into eight parts, focuses on Rosenstein and surveillance matters in the first three articles. The document asserts that the veteran Justice Department official “engaged in a pattern of conduct incompatible with the trust and confidence placed in him” in his dealings with Congress and “failed to enforce multiple laws” in the warrant process.

The draft also states that Rosenstein “knowingly provided misleading statements” during congressional testimony about steps the federal government took to investigate Russian interference in the 2016 election.

This is consistent with the narrative that Trump's supporters have used throughout the Russia investigation — namely, that it is the result of officials in the "deep state" seeking to undermine Trump's presidency. As the Post also explained, it is very unlikely that Meadows and the rest of the House Freedom Caucus would be able to successfully impeach Rosenstein if they made a serious effort to do so.

Impeaching a federal official is an exceedingly difficult endeavor. While House members can refer impeachment articles to the House Judiciary Committee, it is usually up to the committee to debate or draft impeachment legislation that could be brought before the House for a vote. A simple majority is then needed for an article of impeachment to pass and be sent to the U.S. Senate for a trial. Two-thirds of the Senate is necessary to convict and remove the accused from office.

Should the Judiciary Committee decline to take up a proposal, Meadows and his colleagues are considering offering articles of impeachment under what is called a “privileged” resolution, which is when a floor vote is quickly called if the House speaker approves.

Another part of the problem is that there simply is no credible case that Rosenstein has done anything worthy of impeachment.

"This appears to be yet another case of President Trump's allies doing whatever they can to fight the investigations into the president," Jordan Libowitz, communications director at the Committee for Responsibility and Ethics in Washington, told Salon by email. "We'll see if they make an actual move, but for now it's just been grandstanding in the press."

"When you impeach an executive official, it's frankly branding them as a criminal. It's not meant to use to go after officials who don't share your policy views or your political goals," Charles Tiefer, a law professor at the University of Baltimore, told USA Today.

Nevertheless, as Robert Costa explained in a column for the Post, the move to impeach Rosenstein has many Democrats feeling "alarmed."

They tell me the impeachment talk and document clashes are all about crippling Mueller’s investigation. Meadows, meanwhile, insisted in an interview on Monday that his efforts are serious and argued that Rosenstein is his target in this back-and-forth — not that investigative sphinx, Mueller.

One Democrat on the House Judiciary Committee confirmed Costa's description of the party's feelings on Monday evening:

"It's sickening to hear that ... there are no limits, or no length, that they are not willing to go to just torch the Department of Justice." - Rep. Eric Swalwell on reports House conservatives are drafting articles of impeachment against Rod Rosenstein https://t.co/dlNDc3qWwZ pic.twitter.com/MGPfwi7wrC

"It's sickening to hear that, Erin. There are no limits or no length that they are not willing to go to just torch the Department of Justice and every single floor that would work independently to uphold the rule of law in our country," Rep. Eric Swalwell, D-Calif., told CNN's Erin Burnett. "Voters will have their own say at the ballot box this November, and I don't think they're going to look too kindly on people who think their job is to protect the president rather than to protect our democracy."

In the end, the main takeaway from the effort to impeach Rosenstein is that it is a political ploy by the president's allies to try to protect him from possible legal trouble. By contrast — despite the efforts of Trump and his supporters to paint it otherwise — the Mueller probe primarily represents a legal problem that could take down this presidency.