GOP's plan for the midterms: Run against Robert Mueller and get Trump a Nobel Peace Prize

House Republicans have little legislative accomplishments to run on this fall 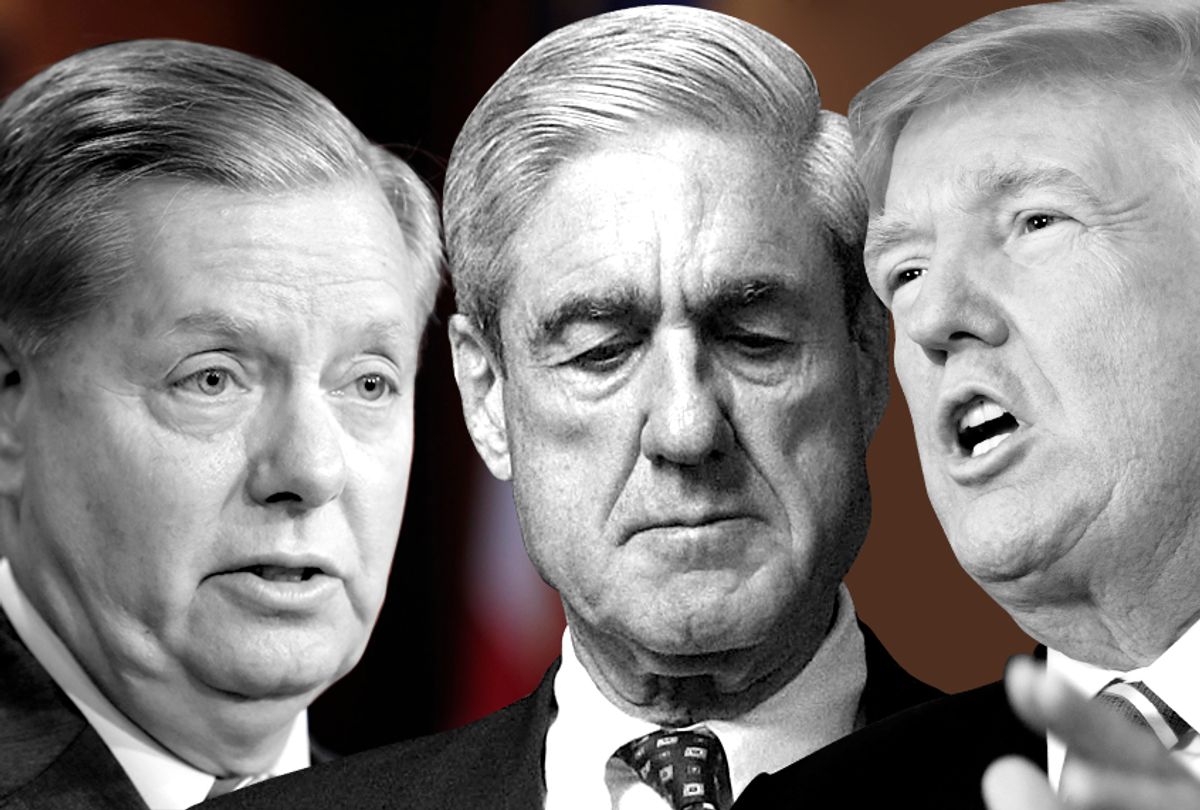 Ahead of the 2018 midterm elections, Republicans in Congress are trying their political brand even more closely to that of President Donald Trump, despite his growing scandals, because they have so few legislative accomplishments to run on.

A group of Republicans in the House of Representatives nominated the president for a Nobel Peace Prize, a distinction his predecessor won one year into his term, for diplomacy with North Korea. In a letter sent to the Norwegian Nobel Committee and signed by 18 Republicans, Rep. Luke Messer, R-Ind., argued that Trump had compelled North Korea to the negotiating table through "peace through strength policies," according to the Associated Press. Messer, who is running to unseat Democratic Sen. Jo Donnelly, also argued that Trump had managed to unite China and other nations throughout the world in a policy of imposing strict sanctions against North Korea, claiming that "the sanctions have decimated the North Korean economy and have been largely credited for bringing North Korea to the negotiating table."

The letter did not mince words in praising the supposedly salutary effects of Trump's policies toward North Korea.

"Since taking office, President Trump has worked tirelessly to apply maximum pressure on North Korea to end its illicit weapons program and bring peace to the region," the letter declared, according to CNN. In addition to Messer, who is running for the U. S. Senate in Indiana, the other signatories include Rep. Mark Meadows of North Carolina, leader of the conservative Freedom Caucus; Rep. Steve King of Iowa, another prominent conservative in the House of Representatives; Rep. Diane Black of Tennessee, who is running for governor in that state; Rep. Marsha Blackburn, also of Tennessee, who is the presumptive Republican nominee in that state; Rep. Kevin Cramer, who is running for the Senate in North Dakota; Rep. Evan Jenkins, who is one of the frontrunners for the Republican Senate nomination in West Virginia; and Rep. Jim Renacci, who is running for governor of Ohio.

Yet as CNN noted, the absence of Rep. Todd Rokita, R-Ind., says a great deal about the political implications of the letter itself.

Noticeably absent from the letter is one of Messer's primary opponents in Indiana, Rep. Todd Rokita. Former state Rep. Mike Braun is also seeking the Republican nomination to challenge incumbent Democratic Sen. Joe Donnelly in what is considered one of the most competitive races in the country.

Rep. Rokita, R-Ind., who is currently running for Senate, also introduced a resolution in the House on Thursday calling for an end to special counsel Robert Mueller's Russia investigation unless evidence of collusion is produced within the next 30 days.

Republicans in the House have not been the only ones to call for Trump to win the Nobel Peace Prize.

Sen. Lindsey Graham, R-S.C., who has been one of Trump's most vocal Republican critics, also claimed on Sunday that Trump may deserve the Nobel Peace Prize if he manages to bring about a lasting peace between North Korea and South Korea.

"I think Trump has convinced him [Kim Jong-un] that the only way his regime will survive is for them to give up their nukes and in return to end the Korean War so North Korea can have a more normal economy," Graham told Fox News' Maria Bartiromo.

He argued that "President Trump, if he can lead us to ending the Korean War after 70 years and getting North Korea to give up their nuclear program in a verifiable way, deserves the Nobel Peace Prize and then some."

Graham also joked that "I want to be there. It may be the first time the Nobel Peace Prize was given and there was mass casualties because I think a lot of liberals would kill themselves if they did that. But the bottom line is, by any objective measure what President Trump has done is historic."

And, of course, Trump did little to quell chants of "Nobel! Nobel!" from a crowd of supporters in Michigan on Saturday, making it clear that he would be tickled pink by winning the prize.

Aside from praising Trump to win support from his base, a group of House Republicans is also threatening to impeach Deputy Attorney General Rod Rosenstein and turning special counsel Robert Mueller into a villain for Republican voters to rally against.

There are two main takeaways from this story.

First, the fact that so many Republicans — particularly those who are seeking a higher office in this election cycle — have jumped aboard the "Trump should win a Nobel Peace Prize" train tells you a great deal about their state of mind. Aside from Trump's unpopular tax reform bill, the Republican Party has very little to show for Trump's presidency in terms of concrete achievements, even though he has had control of both houses of Congress throughout the first two years of his term. Presumably having Trump win a Nobel Prize could help them in their various election bids (although, to be fair, Barack Obama's Nobel Prize in 2009 didn't stave off major Republican victories in the 2010 midterm elections).

At the same time, there is a significant political danger to Republicans calling for a Nobel Peace Prize for the president so soon. Because the summit between Trump and Kim Jong-un hasn't happened yet, putting the possibility of a Nobel Peace Prize on the horizon raises the expectations on Trump — and the pressure on him — much more so than might otherwise be the case.

In addition, it is telling that Trump's supporters are calling for him to win the Nobel Peace Prize at such a premature time. If the president is able to negotiate a lasting peace between North Korea and South Korea, he would absolutely deserve the prize — but that remains a very big if. As policy experts explained to Salon last month, North Korea has a long history of making broad promises that it doesn't keep and establishing goals without allowing independent, third-party sources to verify them. If they continue to do this after Trump meets with North Korean Supreme Leader Kim Jong-un, the best case scenario is that the peace talks will falter and Trump will have egg on his face after all of his boasting.

The worst case scenario is that, because Trump has been so outspoken about resorting to military options if he doesn't get results from the wayward dictatorship, he may feel compelled to go to war — the exact opposite, of course, of the kind of policy that should result in a Nobel Peace Prize.