Unlike Muhammad Ali before them, black athletes' activism now resembles a corporate bridge between the races 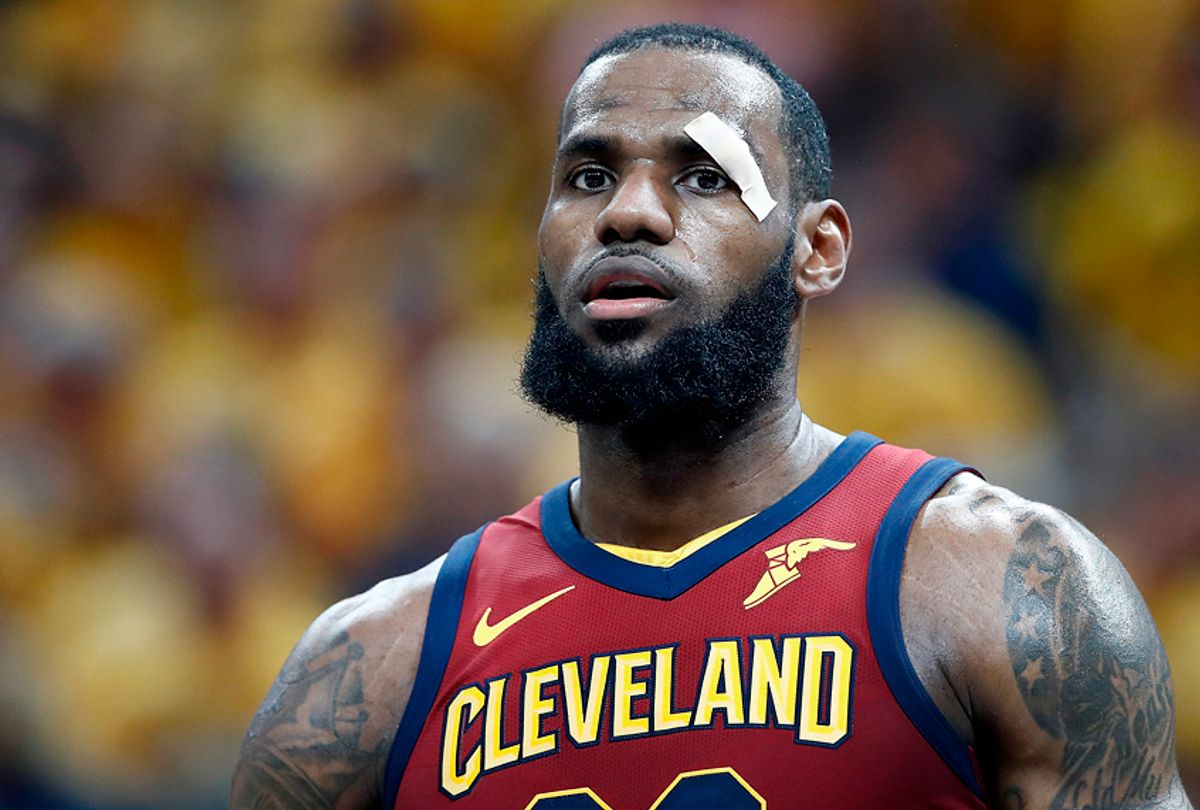 Excerpted from "The Heritage: Black Athletes, a Divided America, and the Politics of Patriotism" by Howard Bryant (Beacon Press, 2018). Reprinted with permission from Beacon Press.

Ballplayers were the Ones Who Made It.  And being the Ones Who Made It came with the responsibility to speak for the people who had not made it, for whom the road was still blocked. The responsibility became a tradition so ingrained that it hung over every player. The tradition became the black athlete’s coat of arms, and the players who upheld it — Jackie Robinson, Muhammad Ali, Tommie Smith, John Carlos — would one day be taught in the schools. The ones who did not — the commercial superstars who followed, like O.J. Simpson, Michael Jordan, Tiger Woods — could never escape the criticism that they shrank from their larger duty to the people. The tradition was so strong that it even had an informal nickname: the Heritage.

The revival of the heritage has been made possible through the old cliché that, for the first time in decades, now works in favor of social justice: the player with the biggest number of zeroes on his paycheck shapes the culture. Today, that player is LeBron James.

James does not hide from his liberal politics. He loudly rejects Donald Trump and his policies. James pledged over $40 million to send children from his hometown of Akron to college, and unlike in the Michael Jordan era, he did not out of fear of offending the white mainstream write a check without showing his face. James has done what Jordan did not: he gave cover to the athletes without his talent or bank account to be more vocal politically. He sent the message that being politically active should not be radical but commonplace.

“I’m watching TV at five o’clock in the morning in the gym, and they’re saying that LeBron got more points than Michael Jordan, but there’ll never be another Michael Jordan,” Al Sharpton recalled during the 2017 NBA playoffs. “But LeBron far excels over him in terms of standing up for causes by putting on that hoodie for Trayvon and that I Can’t Breathe T-shirt for Eric Garner. I can’t think of anything remotely close that Michael did.”

Two months before Colin Kaepernick’s awakening, James, Chris Paul, Carmelo Anthony, and Dwyane Wade took the stage in Los Angeles at the 2016 ESPYs, ESPN’s annual glamourfest award show. Days before, James’s representatives contacted ESPN president John Skipper on behalf of the foursome with a request: they wanted to use the ESPYs to make a statement to America after a week of violence between black communities and police so gruesome that it prompted even Michael Jordan, now part of the ruling class as owner of the Charlotte Hornets, to speak.

In St. Anthony, a suburb of St. Paul, Minnesota, thirty-two-year-old public school cafeteria worker Philando Castile was shot seven times and killed by police after being stopped for a broken tail light. In Baton Rouge, another black man, thirty-seven-year-old Alton Sterling was killed by police after they confronted him for selling compact discs on a sidewalk. Days after that, Xavier Micah Johnson, an Army veteran who had served in Afghanistan in 2013 and 2014, ambushed and killed five police officers in Dallas in alleged retaliation. In retaliation for the killing of Sterling, 29-year-old marine veteran Gavin Long ambushed police officers in Baton Rouge, killing three and wounding three more.

“The four of us are talking to our fellow athletes with the country watching, because we cannot ignore the realities of the current state of America,” Anthony began. “The system is broken. The problems are not new, the violence is not new, and the racial divide is definitely not new, but the urgency for change is at an all-time high.”

Paul, too, reclaimed his inheritance. “Decades ago, legends like Jesse Owens, Jackie Robinson, Muhammad Ali, John Carlos and Tommie Smith, Kareem Abdul-Jabbar, Jim Brown, Billie Jean King, Arthur Ashe, and countless others, they set a model for what athletes should stand for. So we choose to follow in their footsteps,” he said.

James went last: “It’s not about being a role model. It’s not about our responsibility to the tradition of activism. I know tonight, we’re honoring Muhammad Ali, the GOAT [Greatest of All Time], but to do his legacy any justice, let’s use this moment as a call to action for all professional athletes.”

The old ways were uncomplicated. Paul Robeson and Muhammad Ali were unambiguous: they fought for black people. Modern athletes, however, have not aligned themselves with the Heritage, but these players are now practically walking portfolios. As of 2017, Dwyane Wade had earned $179.5 million in salary alone; Carmelo Anthony, $206 million. Serena Williams’s net worth, according to Forbes, was $150 million in 2016, and she owned a minority stake in the Miami Dolphins. Venus Williams owns her own clothing line. James, meanwhile, executive produces game shows, movies, TV programs. The Motley Fool investment guide estimated his net worth in 2017 to be roughly $400 million. Alex Rodriguez was never an activist, but he was so rich that he referred to Warren Buffett as “a friend,” for goodness’ sake.

Their ubiquity within the culture has given black athletes a different mission: they are not expected to stand for black people but to make the world a better place. During negotiations with the players, ESPN edited their comments that sounded “anti-police,” while the players worked with their individual teams and business relationships to ensure they were not harming their financial partners. The editing of the statements continued right up until the minutes before the curtain rose, John Skipper recalled. The message was powerful, but it was the result of compromise, concession. If the original purpose of the Heritage was for athletes, in Tommie Smith’s words, to “support oppressed people around the world,” the modern political black athlete more resembles a privileged, corporate bridge between the races whose job isn’t to advocate for Pan-Africanism, for the black people of the world, as Ali and Robeson did, but to advocate for everybody. It is to be a peacemaker.

That means being caught in the middle during a time where there is no middle. Despite the high-profile killings by Gavin Long and Micah Xavier Johnson, widespread systemic black retaliation against police does not exist, yet Wade addressed the issue as if foreshadowing a race war. “The racial profiling has to stop. The shoot-to-kill mentality has to stop. Not seeing the value of black and brown bodies has to stop,” he said. Then, he added a negotiated, balancing qualifier, necessary to accommodate a pro-police corporate obligation. “But also the retaliation has to stop. The endless gun violence in places like Chicago, Dallas — not to mention Orlando — it has to stop. Enough. Enough is enough.” Wade’s words underscored the corporate minefield today’s players tread.

Days later, Jordan appeared, comfortable speaking out because the retaliatory killings allowed him to appease that middle, simultaneously admonishing and supporting the black community—which played well with cops and an American mainstream that could not see beyond black people kneeling. In a piece for the ESPN website “The Undefeated” titled “I Can No Longer Stay Silent,” Jordan reinforced his cautious, inoffensive public style, playing to both sides — and writing a really big check:

I can no longer stay silent. We need to find solutions that ensure people of color receive fair and equal treatment AND that police officers — who put their lives on the line every day to protect us all — are respected and supported. . . . To support that effort, I am making contributions of $1 million each to two organizations, the International Association of Chiefs of Police’s newly established Institute for Community-Police Relations and the NAACP Legal Defense Fund.

Chris Paul negotiated, prefacing his comments in the same qualifying fashion, either that not all cops are bad or by announcing his personal bona fides. Paul’s uncle was a police officer, as if that special qualification were required for him to voice an opinion. In post-9/11 America, perhaps it was.

The white mainstream put critics of police and military on the defensive. A common, disjointed response to police killings was to decry so-called “black on black” crime, where the high numbers of killings in the inner cities such as Chicago were an epidemic—thus Wade’s inclusion of the “senseless gun violence in Chicago” was personal as it is his hometown, but was also seen as a negotiated appeasement to the “What about black on black crime?” sect. It was always a false equivalence in a time of the declining value of facts. Crime ostensibly is committed by criminals, yet by this reasoning, police were compared with lawbreakers. It was actually a rhetorical derivative of Shut up and play: black people killed one another, so why should anyone complain when the good guys kill them too?

James said the night should have been a call to action for all athletes, but just as in the 1960s, few if any white players accepted the challenge. The police unions reacted to player protests first by co-opting the name of the movement Black Lives Matter into their own counter-protest, Blue Lives Matter, and then by often ridiculing black victims and threatening to withhold services to events where they received criticism from black celebrities. When James said, “It’s not about our responsibility to the traditions of activism,” he could not have been more mistaken. It was precisely that, because he stood in front of America for the same reason his forebearers had whenever they sought white support: pleading to be seen as full Americans with a public that only saw flag over grievance, authority over justice. It was about reclaiming a voice from an American public that didn’t think they had ever earned the right to speak at all.

It was all complicated. James was a revelation, but when Tamir Rice was killed, he did not return to Cleveland and walk arm in arm with the people as Anthony did in Baltimore. Instead, he was curiously distant. Like the rest of the modern incarnation of the Heritage, James was expected to be a peacemaker, urging calm, facilitating “dialogue.” It was being a bridge, ironically, to nowhere.