The sheer enormity of the pile of boxes will amaze you in "Styrofoam," currently streaming on Salon Premium 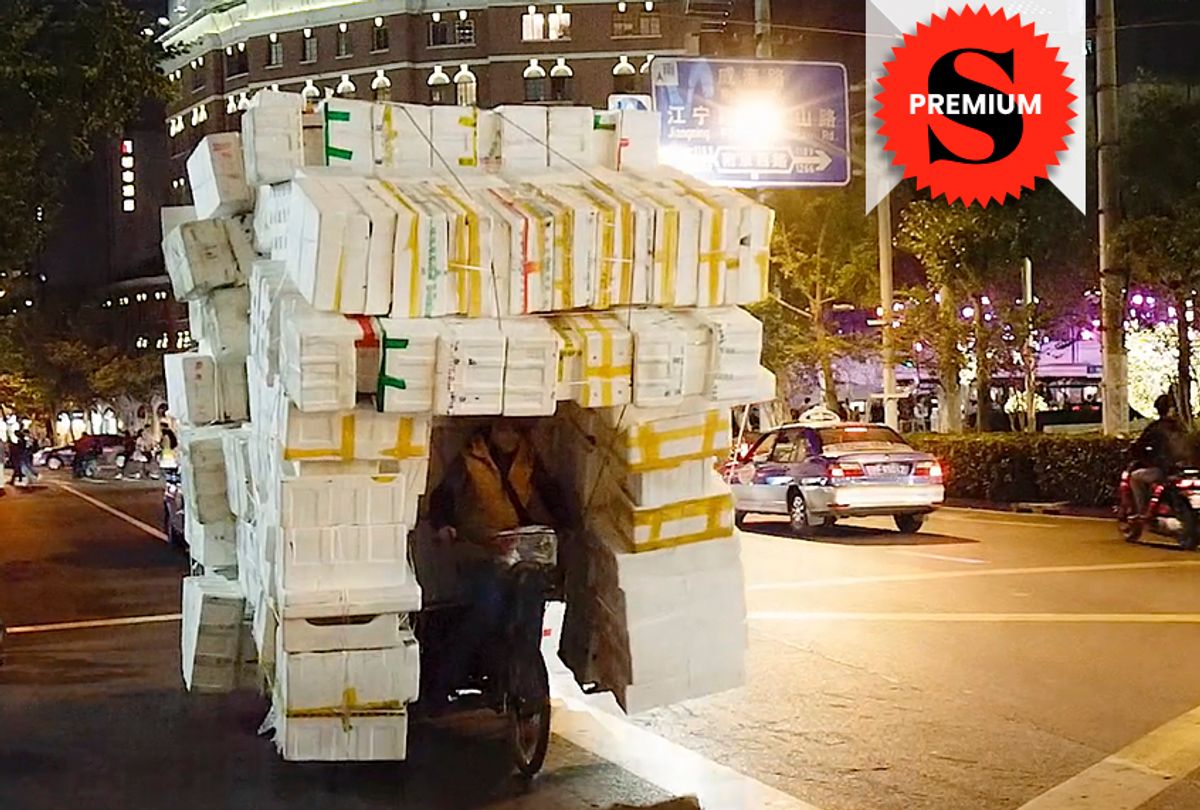 A Still from "Styrofoam" (Noah Sheldon)
--

There’s something so poignant, in a funny and sad way, about the image of Guo Jie, a poor, rural Chinese woman who transports an enormous pile of Styrofoam on her bicycle every day.

You can watch the full documentary "Styrofoam" on Salon Premium, our new ad-free, content-rich app. Here's how.

Director Noah Sheldon talked to Salon about Guo Jie and what he hoped to capture with her arresting image.

How did you discover your remarkable subject, Guo Jie?

Seven years ago, I was sitting with my wife and small daughter at a restaurant. It was about a week after we moved to Shanghai from New York, when we saw Guo Jie ride by. We were amazed. I grabbed my wife's brand new iPhone 4 and followed her down the street to a market where she was picking up boxes, and I asked her if I could film her with the iPhone. She seemed slightly amused but also a bit skeptical.

Years later, I decided I wanted to make a longer, more substantial film about her. My producer Jean Liu and I went around to where I had seen her and showed everyone at the market pictures of her. Even though she had been buying from that market for years, no one knew her name or how to get in touch with her. But she came by every other day. Jean decided to wait for her all day. When she found her again to make the film she was getting a parking ticket from the police so she wasn’t too interested in talking to us. To Guo Jie, her work may seem super necessary to provide basic income. What she doesn't see is just how novel and innovative her [business] model is.

In Shanghai it’s not uncommon to see trash collectors and their bikes piled high with cardboard, plastic bottles or Styrofoam. What really stood out about Guo Jie was how much bigger her bike was than anyone else’s and how methodically she’d arranged her boxes to fit as much on as possible. She’s extremely enterprising!

How did she respond to you wanting to film her?

When we found her again and she was getting the parking ticket, she wasn’t too interested in talking to us. I think after we’d gotten to know her and explained to her what filming would entail, she was mostly bemused and perplexed. To her, her life seems unbelievably pedestrian and ordinary, and she probably thought it would be the most uninteresting film ever made.

How many times a week does she make a trip like the one in the film? And could you quantify how much income Guo Jie makes from such a load?

She works every single day unless there are typhoon winds, and she usually manages one trip a day. She has two routes around the city and she alternates between them, one route per day. She wouldn’t explicitly tell us how much money she made but she buys the boxes for 0.5-1rmb a box and sells them for around 3rmb a box. She’s collecting over 300 boxes a day but this varies a lot according to season and of course sometimes she’s fined.

Can you describe the place where Guo Jie sells the Styrofoam? Did you consider including the selling process in the film?

Guo Jie sells the Styrofoam boxes by collecting from the fruit market and then selling to a wholesale fish market. They then fill the boxes with water to store their live fish. Guo Jie was adamant we didn’t bring cameras into the market as she didn’t want to spook her customers, so we couldn’t really include the selling process even if we wanted to.

Were the police or Chinese government aware of you filming, and if so, did they try to control your production?

We kept the production crew very small and local to Shanghai, so we didn’t really attract the attention of any authorities during the shoot. I also don’t think the film is particularly critical of policies implemented by the Chinese government. I really wanted to reflect Guo Jie’s personality in the tone of the film. She is extremely matter of fact and not at all self-pitying. The film aims to present Guo Jie’s reality as it is and how skillful she is at what she does. I don't think she is concerned that she might be part of a greater social trend or of the political climate around migrant workers. She just assesses her situation and figures out how to make the most of it.

Get a glimpse of the absurdity of the human condition and the hardship of one Chinese migrant worker with “Styrofoam,” streaming on Salon Premium, our new ad-free, content-rich app.