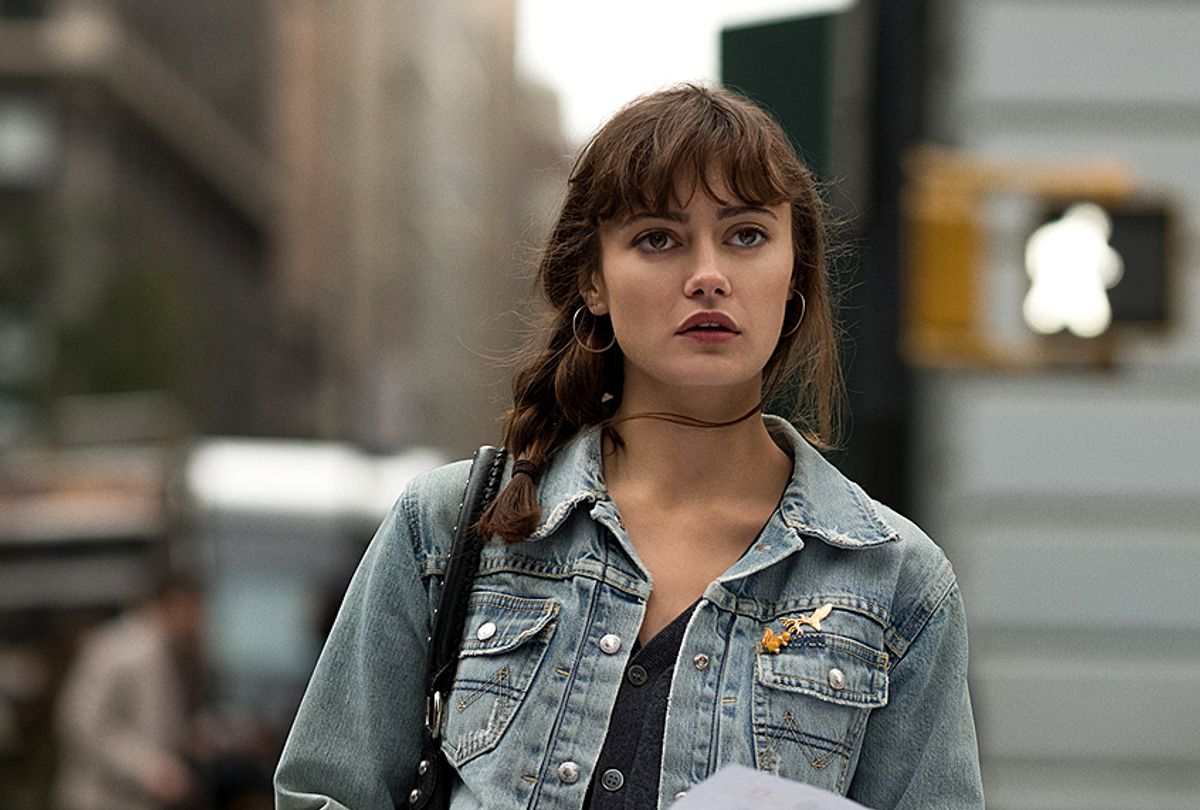 Tess, the 22-year-old heroine of Starz’ “Sweetbitter,” exists in a version of New York City that no longer exists, the New York of 2006, where broke hipsters from small towns can afford their own apartments on a backwaiter’s salary. To the show’s credit, Tess’s apartment is spartan relative to those of other 20-something TV characters striking out on their own in one of the world’s most expensive metropolises. We barely see her there, actually, but we see enough of it to notice she sleeps on an inflatable mattress.

Such accoutrements matter in a show like this one, another story catering to some dream of adulthood. Mixing in a touch of realism doesn’t merely gesture at authenticity, it also makes the journey of the character’s struggle all the more triumphant, her mistakes more palpable.

But there’s no getting past the meringue-in-the-clouds aspect of “Sweetbitter,” debuting Sunday at 8 p.m., realized as the sort of belly-flipping twinge produced by ingesting too much sugar while famished.

Supposedly Tess is special, you see. Series star Ella Purnell plays her as a doe-eyed naif who reflects the world around her as opposed to being a remarkable part of it, yet somehow we’re supposed to buy that she exudes some invisible “I don’t know what” that allows her entry into the magical underworld of Manhattan’s elite service industry.

Really, Tess is merely a diving board allowing us to leap headlong into the bohemian family staffing the very exclusive restaurant where she lands. Its manager carefully curates its staff and, for reasons that aren’t clear, he gives her a shot despite her lack of experience and an apparent paucity of cultural literacy. Tess is hungry to learn. Tess also looks like a fresh thing ready to be spoiled by life’s harshness.

Into every generation a defining coming-of-age-in-the-big-city story is born. For eons “Sex and the City” held that standard until Lena Dunham came along and bestowed “Girls” upon millennials. (Yours truly was immune to the traction-beam magnetism of that show, but then it was never for me. Not until “Insecure” came along was the hole in my heart left by the demise of “Girlfriends” finally filled.)

“Insecure” is an L.A. story though, while “Sweetbitter” is decidedly a New York tale, in the same way Dunham’s Hannah Horvath famously declared, while high, that she could be a voice of a generation. Young women and young men will not discover anyone worthy of emulating in "Sweetbitter;" I can't imagine anyone viewing Tess as their inspiration. That said, it does contain a few useful archetypes to beware of in the form of condescending peers all too eager to make a punching bag out of their junior co-worker.

“Sweetbitter” manifests very differently onscreen than it does in Stephanie Danler’s bestseller, upon which the series is based. Reading Danler’s book is not a prerequisite to enjoying “Sweetbitter,” although, like a good salt, doing so enables a person to recognize which flavors are missing.

On the page Danler creates an extraordinary feast that calls forth rich imagery while capturing the taste of independence via intoxicating prose. Reading about Tess’s adventures in the kitchens, wine cellars and dive bars of New York City in the aughts mimics a hedonistic assignation teased into being by a blossoming palate. Danler dances with words to send the reader on rollercoaster rides through her narrator’s drug-fueled all-nighters, enlivening them in all their colors and sounds and sensation and even the slogging drowse of their aftermath.

That’s always the peril presented by reading a book before watching a show or a movie inspired by it  — a book sets a standard that producers must strive mightily to match or beat. Danler wrote several episodes of “Sweetbitter” in addition to developing the series, and fortunately she isn’t tasked with creating Hogwarts or Middle Earth here. Even so, a demanding Midtown kitchen can be a fascinating setting and challenging to reproduce (Fox tried to bring such a place to life with a sitcom version of Anthony Bourdain’s “Kitchen Confidential,” which flopped almost immediately). And “Sweetbitter” gets the look of the place right while shorting the viewer on its portion sizes of feeling.

Nominally speaking, Purnell is the lead, but she’s also a wallflower in a wild garden of outsized characters. And while her performance is just fine, Tess is written to fit an ideal of innocence rather than a fleshed-out human. This makes her an awkward guide through a closed-circle community of adults, some of whom aren’t fully formed themselves.

One trait “Sweetbitter” gets right is its presentation of a tumultuous workplace driven by excess and a share of sexism. Tess’s co-workers derisively slap her with the nickname “Skip,” short for Skipper, Barbie’s little sister, and she barely reacts. In fact, the character is most interesting when she’s in the presence of one of the place’s most mercurial employees, a foul-mouthed Eastern European walking bewilderment named Sasha (Daniyar). He’s that devil on Tess’s shoulder, the friend who makes life interesting (and possibly shorter); appropriately, he blesses her with the nickname of “Baby Monster.”

But when the story hangs upon Tess’s yearning for hard-to-get co-worker Jake (Tom Sturridge), or the otherworldly Simone (Caitlin FitzGerald), the flavor dies out. Tess spends a lot of time wondering about Jake, swooning at his steamy hunter eyes, but Sturridge does little to make the audience understand the attraction. Simone, meanwhile, is a student of food down to its very essence and obsessed with making the experience of cuisine seamless part of the guest experience.

In the book, that is. In the series FitzGerald, who is so very good in “Masters of Sex,” infuses her with such chill that it impossible to understand why this woman can command a room. Only until she and Tess share an intimate off-site moment in Simone’s quintessentially New York apartment (a tiny jewel box of a place filled with books and curios) do we get a sense of her complexity and possibly the danger she poses to the new kid. But by then we’re well into the season; who knows if you’ll stick around for that long?

At least in these moments Tess’s world becomes a place worth visiting, where sparks and flares of possibility emphasize the contrast between crass ruthlessness behind the kitchen’s swinging doors and the restrained, tasteful elegance of the dining room.

The first season of “Sweetbitter” is only six episodes long, with each installment running under 30 minutes. So regardless of its shortcomings, at least it goes down smoothly, quickly and easily. But this is an amuse bouche packaged as a full meal; a promise of a new coming-of-age adventure that, as seen on TV, feels all too ordinary.