Nobody paid attention to Jeff Sessions this week. That's good for him, bad for America 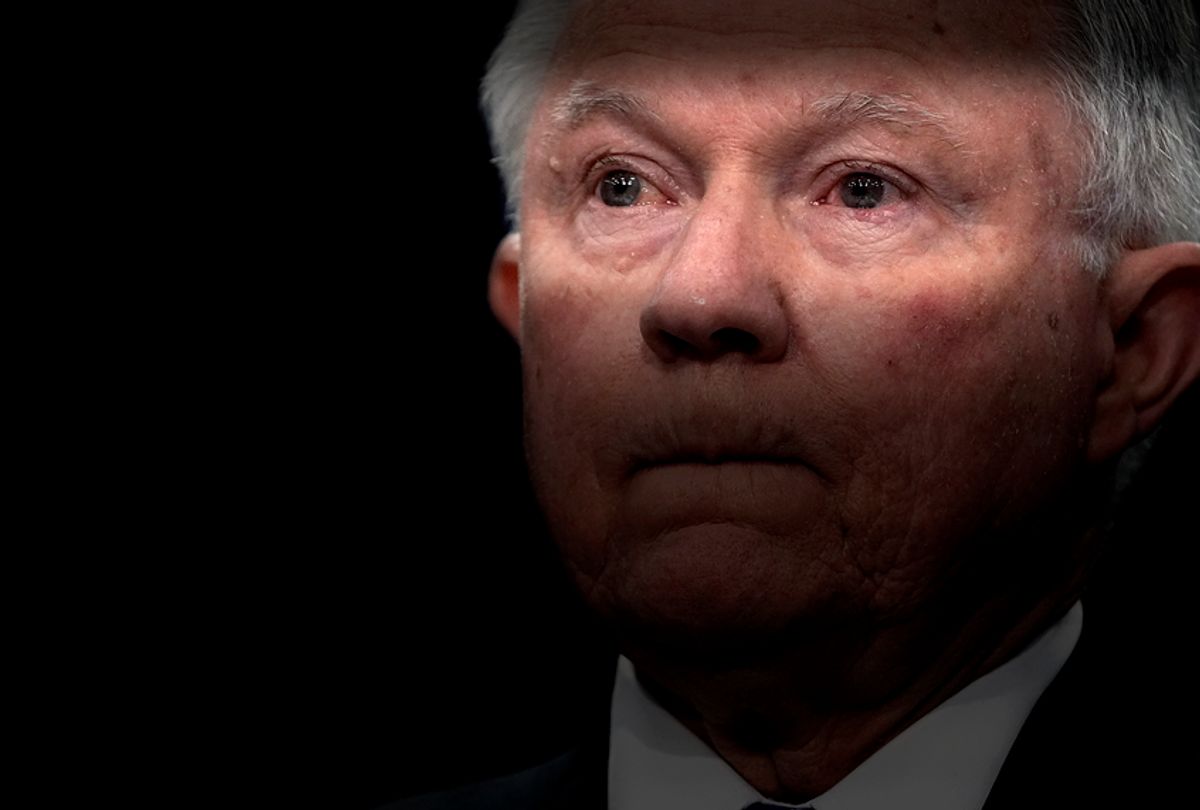 There is a reason why Jeff Sessions continues to endure the indignities heaped upon him by President Trump and Rep. Devin Nunes, R-Calif., chair of the House Intelligence Committee. Ever since his days as an Alabama prosecutor during the War on Drugs era, Trump’s attorney general has been dead set on cracking down on poor people in a return to tough-on-crime law enforcement. There probably has been no better week for the fulfillment of that agenda than this one.

On Monday, Sessions made official the Trump administration policy of ripping children from their families, if they crossed the U.S.-Mexico border. On Tuesday, he traveled to Tennessee to taunt the 97 workers who were arrested during a recent immigration raid at a local meat processing plant. "I'm not shedding tears about them,” Sessions said of the detained workers, and the 160 children left without parents overnight.

On Wednesday, he faced a minor setback when Republicans on the House Judiciary Committee voted to advance a criminal justice reform bill he passionately opposes. (Sessions has emerged as the primary political obstacle to bipartisan sentencing reform on Capitol Hill.) But by Thursday he had bounced back, wrapping up his week of patient work in the background with quiet praise for law enforcement.

Out of the spotlight, obscured by Trump’s other sidekicks and their latest scandals, Sessions has succeeded in centering immigration as the nation’s top law enforcement priority and at prioritizing criminal proceedings over their impact on crime. He’s quietly instructed prosecutors to go after low-level offenders and removed Department of Justice grants to study criminal justice reform. If his increasingly aggressive rhetoric is any indication, however, Sessions is eager to get credit for this crackdown on the most vulnerable people in our society.

"If you are smuggling a child then we will prosecute you, and that child will be separated from you as required by law," Sessions said in officially announcing the policy that has been unofficially in effect for months. "If you don't like that, then don't smuggle children over our border."

It's an explicit message meant to prevent parents from seeking asylum in the United States. Asylum seekers who turn themselves in at a point of entry and request asylum — the procedure outlined by international treaty — have broken no laws. But Trump administration officials have said they believe the asylum process is overwhelmed and challenged by frivolous claims. So asylum seekers will pay the price.

As part of his “zero-tolerance policy” on border protection, Sessions traveled to Scottsdale, Arizona, and San Diego on Monday to boast that parents apprehended at the border will be placed into criminal custody and their children will be sent to federally funded shelters. In fact, this seemingly cruel policy has long been a goal of the Trump administration.

One underreported element of Trump’s so-called four-point immigration reform plan is the end of a 1997 federal consent decree that requires the U.S. government to release immigrant children from custody, if possible, or otherwise hold them in the "least restrictive setting" available. The Washington Post reported on Wednesday that Sessions is working with the Department of Homeland Security to expand the average stay in a detention facility from 14 days to 45 days, and claiming the authority to delay snacks and other provisions for children.

Roughly 700 children have been separated from their parents at the border since last October, according to data examined by the New York Times. “Last month, senators at a subcommittee testimony said almost 1,500 migrant children went missing after federal officials put them in the homes of adult sponsors around the country,” the paper reported.

This is of course an administration that hails former Phoenix sheriff Joe Arpaio, convicted of offenses related to racial profiling (and then pardoned by the president) as a folk hero? Sessions’ gleeful announcement making these policies official, coincidentally timed to coordinate with the kickoff of Melania Trump's "take care of children" campaign, makes clear that America's values are secondary to the war on immigrants. Sessions’ harsh message may well cut down on illegal border crossings. But the question is whether that's how America wants the rest of the world to see us. The United States’ historical role as a beacon of hope and opportunity for refugees has been replaced by images of overcrowded detention centers, where children reportedly prey upon each other and form gangs for protection.

“If you cross this border unlawfully, then we will prosecute you. It’s that simple,” Sessions added, describing his new policy. “We are dealing with a massive influx of illegal aliens across our southwest border. But we’re not going to stand for this.”

But that’s not true. There’s no sudden crisis in "illegal" immigration. Apprehensions at the southwestern border remain near historic lows. And as Reuters reported Wednesday, border communities are concerned that Sessions’ promise will overwhelm the federal court systems in those areas.

Taunting his critics at a law enforcement conference in Tennessee on Tuesday, Sessions laughed at the “fuzzy-headed left” who have raised concerns about civil liberties. “You don’t get to get an advantage in this country by having large numbers of illegal workers working for you … You don’t get to benefit from being in this country and looking around the world for the cheapest worker you can find,” he said of a recent workplace raid in the area. But a month after the raid, no charges have been filed against the owners of the plant who apparently hired and then abused their immigrant labor force.

As Masha Gessen writes in the New Yorker this week, “hostage-taking is an instrument of terror.” While many of us were distracted by the confirmation hearings that may end with someone who oversaw the nation’s secret torture program under George W. Bush to lead the CIA, Jeff Sessions made it official U.S. policy to forcibly separate children from their mothers.

While he was speaking in San Diego, Sessions was interrupted by a heckler with a megaphone.

“We don’t want you in our state,” the man yelled. “Are you going to be separating families? Is that why you’re here? Why are you doing this? Do you have a heart? Do you have a soul? Why do you work for this administration?”

With all of the mess the media has to sift through every day under this administration — reporters who cover the Justice Department are inundated with Russia-probe news on nearly an hourly — one man with a megaphone isn't enough to garner any real attention. As Jeff Sessions does his darnedest to get back in President Trump’s good graces, one torn-apart family at a time, America's supposed core values are being eroded away to nothing.

Why this Border Patrol agent quit

Francisco Cantú worked on the border for four years, trying to do the job humanely.