A bruising Democratic primary in Pennsylvania: Dark side of the blue wave?

The race to replace Charlie Dent: Democratic infighting may endanger a likely House pickup in Pennsylvania 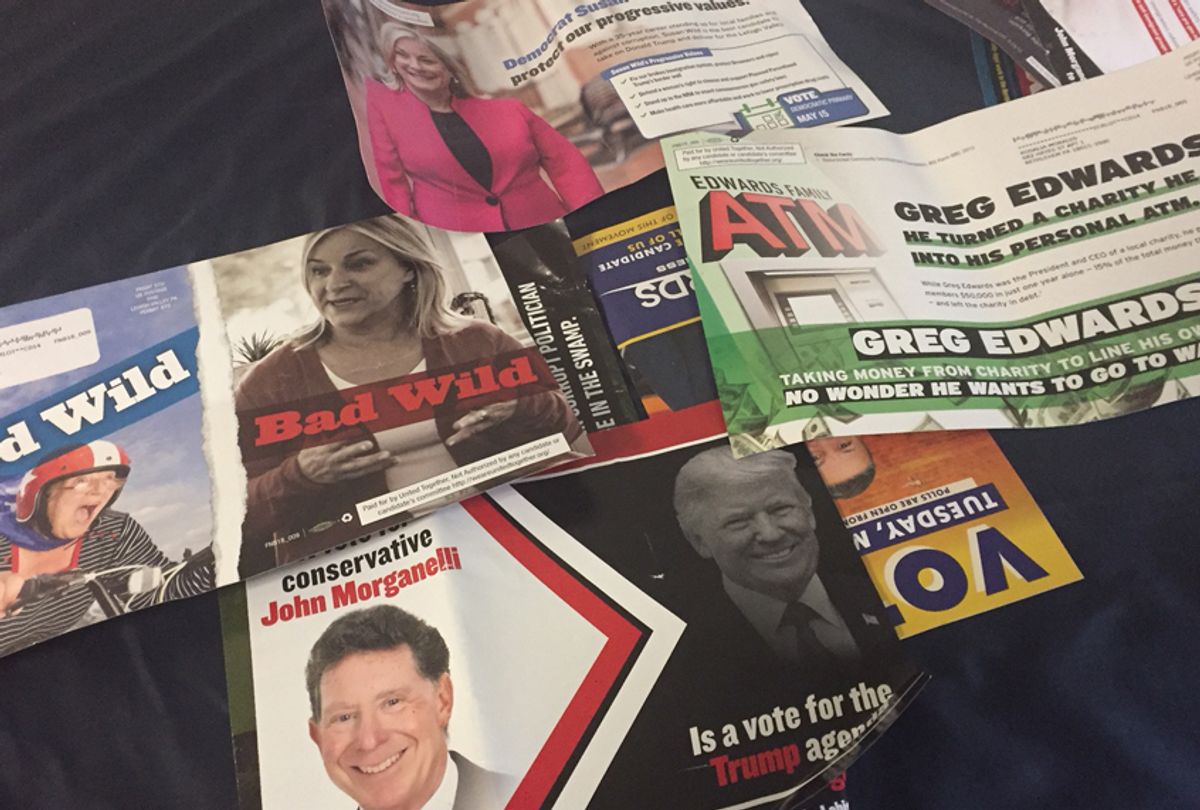 Campaign literature received by the author during this election (Matthew Rozsa)
--

The recent un-gerrymandering of Pennsylvania's congressional districts has terrified Republicans and some, like Rep. Charlie Dent, a relative moderate who was often critical of President Trump, have opted to retire rather than face their new constituency. While that has certainly invigorated the Democratic field in the Keystone State, it has also caused bruising intra-party fights that threaten the party's chances to take advantage of an impending blue wave during this fall's midterm elections.

As I attempted to sift through the mountain of campaign advertising in this Democratic race to replace Dent in Pennsylvania's 7th congressional district -- which will come to a head in Tuesday's primary election -- it became impossible to ignore how much of it was negative, adding to an already dirty race.

As someone who has resided in Pennsylvania's Lehigh Valley for 20 years and held local party office, I have seen all manner of primary and general elections. Things get tough in this area, no question about it, but there is a reason why Pennsylvania has a mostly centrist reputation. There is an underlying civility toward our political process, a pragmatic recognition that pulling out all the stops against one's opponents can also leave you vulnerable, that has at least partially stayed hands that might otherwise sling mud.

Not this time around.

Perhaps it's because the recent and abrupt court-mandated redistricting of Pennsylvania's congressional delegation has invigorated the Democratic field and terrified the Republicans. Or perhaps, given President Donald Trump's abysmal approval ratings, Democrats are certain this is a ripe year for their party and Republicans are desperate to prove them wrong. The one thing that I know for sure, though, is that the state of Democratic politics in the Lehigh Valley reveals that things have changed in this once-sleepy district.

Considering that Wild would be the first woman ever to represent the Lehigh Valley in Congress, and Edwards would be the first person of color to do so (he identifies as both black and Latino), I figured it was appropriate to ask her about these possibly historic milestones.

Wild interjected, "I'm not aware that Edwards is Hispanic."

In a nation where our current president is perceived by many as openly hostile to people of color, a Democrat aiming to defeat a person of color in a key congressional district should probably understand his multicultural heritage, especially given the symbolic significance of his candidacy. Edwards' communications director, Dan Friedman, confirmed that his candidate "is the first person of color running in this district," and if he wins, he will become the first person of color to represent any Pennsylvania congressional district outside Philadelphia.

Whatever the reason why Wild appeared uninformed about her Democratic opponent, one thing is clear: I and almost every other Lehigh Valley resident have received a mountain of campaign flyers in the mail, a large percentage of which is negative advertising about other candidates.

"On the issues that matter most, John Morganelli does not share our values," declares a pro-Wild flyer by Women Vote! that includes a poorly Photoshopped image of Morganelli wearing a "Make America Great Again" hat. (He has never worn such a hat). "Don't let John Morganelli fool you. Morganelli is a conservative politician who has expressed support for Donald Trump and his dangerous policies. He will not represent our interests and our values."

The flyer goes on to list tweets that Morganelli had posted which seemed to praise Trump after the 2016 election and claims that he holds conservative positions on gun control, abortion rights and immigration.

"I am a pro-life Democrat like Robert Casey, who is our U.S. senator from Pennsylvania," Morganelli told Salon regarding the negative ads. "I've made it pretty clear over time that I accept Roe v. Wade as the law of the land. I've also stated that I'm in favor of fully funding Planned Parenthood because of the great services they do for women aside from abortion services. But I do believe that abortion should be available only in cases of rape, incest, the life of the mother and extreme fetal deformity."

Morganelli was also unambiguous about his position regarding the criticisms that he leans conservative on immigration.

"That's not accurate," Morganelli told Salon. "I'm not anti-immigrant. I'm the grandson of immigrants. But I'm not in favor of mass illegal immigration and I do favor enforcement and I do oppose sanctuary cities. I think it's a little unfair to say I'm anti-immigrant, but again, this is politics. That's just how things work."

On the same day I spoke to Morganelli, it is worth noting, CNN reported that he had deleted his previous tweets that seemed to praise Trump and others that appeared critical of the left. These included two tweets seemingly directed at Trump shortly after the 2016 election, which appeared to be angling for work ("Thankful for your coming leadership. Waiting to hear from transition"), motiveless attacks on Chicago Mayor Rahm Emanuel and complaints about the protests against Trump's first "Muslim ban" ("I cannot recall if there were protests when President Obama issued an executive order banning immigration from certain countries?").

"It is a fact that there were some Trump tweets," Morganelli told Salon. "They've been mischaracterized because they were done after the election. . . . It was mostly because I had met Donald Trump four or five years ago at a social event and I was fooling around with Twitter and wishing him well coming into his administration. We were all hopeful as Democrats and as Americans that he would succeed and be a decent president.

"We were wrong about that, he's not presidential in the way that he conducts the office, and I don't agree with him for many of his positions. But again, putting a Trump hat on me — which is not true, I never wore a Trump hat — that's a little over the top and I find that to be disingenuous."

Morganelli hasn't been alone in receiving rough treatment through the Postal Service. A flyer targeting Edwards from a group called United Together attacks him with a Photoshopped picture of an ATM labeled "Edwards Family ATM" next to a charitable donations box.

"To most, this is a charity box," the flyer proclaims. "To Greg Edwards, it's family's personal ATM."

The flyer goes on to claim that "while Greg Edwards was the President and CEO of a local charity, he paid his family members $50,000 in just one year alone — 15% of the total money the charity brought in — and left the charity in debt."

When Salon broached this with Edwards, he insisted this was a non-story. "Everyone knows this is an important race," he said. "The nation is watching. So we're starting to see high levels of outside spending to disparage certain candidates. . . . This piece is put out by a conservative PAC who thinks the way to sway voters is with skewed information on a negative mailer. It's unfortunate but it's not surprising."

He said the charges against him are without substance: "The implication is that a nonprofit organization should never have more expenses than revenue, and that if it does, the organization shouldn't pay its staff or that it's not OK to work with family members. It's just a ridiculous concept and the public can see through it." The mailer, Edwards said, came from a "PAC comprised of billionaires who think paying somebody $40,000 a year for full-time work is exorbitant."

Despite the attack on his charity, Edwards may well be the favorite to win on Tuesday, if only because he recently received the endorsement of Sen. Bernie Sanders of Vermont, the beloved progressive who galvanized millions of voters during the 2016 Democratic presidential campaign.

Finally, there are the flyers against Wild, such as one from United Together that focuses on Wild's relationship with former Allentown Mayor Ed Pawlowski, who resigned last March after being convicted on 47 counts of crimes ranging from bribery and attempted extortion to conspiracy, mail fraud and wire fraud:

"For Susan Wild and Ed Pawlowski, the swamp is Home Sweet Home."

The flyer goes on to claim that "as Allentown's chief legal officer under Mayor Ed Pawlowski, Susan Wild tried to cover up the scandal." It includes a quote from a local newspaper stating that "prosecutors allege that Wild was instructed to direct city legal work to the Norris McLaughlin law firm at the behest of the Mayor as part of a pay-to-play scheme."

Wild adamantly denies these accusations. "It's completely and utterly dishonest," she said. "It's been well publicized that I fully worked with the FBI and the U.S. attorney's office to make sure justice was done in that case," Wild told Salon. "I received the endorsement of several prosecutors after the trial was over. And most importantly, all the actions that were being looked into and investigated occurred long before I became the city solicitor. This is nothing more than a smear campaign that is linking my name to the former mayor's name because we both happened to be in city hall at the same time."

Not all the accusations against Wild come from mailings. An article published last week on The Intercept drew attention to a video showing an Allentown police officer "kicking a suspect who was on his hands and knees in the face, then following it up by dropping his knee on the back of the suspect’s head, smashing his jaw and knocking out three teeth." The article quoted a statement Wild made as city attorney in October 2016, arguing that the officer's actions had been "thoroughly reviewed by command staff and the Solicitor’s Office and found to be appropriate under the circumstances."

Despite this, the city of Allentown later paid $160,000 to settle an excessive force lawsuit filed by the man in the video.

"I haven't seen the video recently but I saw it when I was city solicitor after a claim had already been filed against the city," Wild told Salon. "I did what I did with every single case that was ever brought against the police department, I assigned it out to defense counsel that we had a prior relationship with to defend all of our police cases. I asked that attorney for an evaluation of the merits or demerits of the case, which were given back to me fairly promptly. The case was resolved almost immediately thereafter."

Wild also emphasized to Salon that she is a supporter of Black Lives Matter, acknowledges that there has been "excessive force by police officers across the country" but added that she also she doesn't think "every officer is a bad guy." She lamented that "rogue officers" manage to "taint everybody else who's in the same profession," also saying that she can understand the anger in the African-American community in the wake of such events.

It's impossible to say what will happen in the general election after all of the dirt that has been dredged up in this race. Maybe whichever Democrat wins the nomination will overcome the vitriol being spread right now — which seems to have the clear aim of spreading dissension and making party unity impossible.