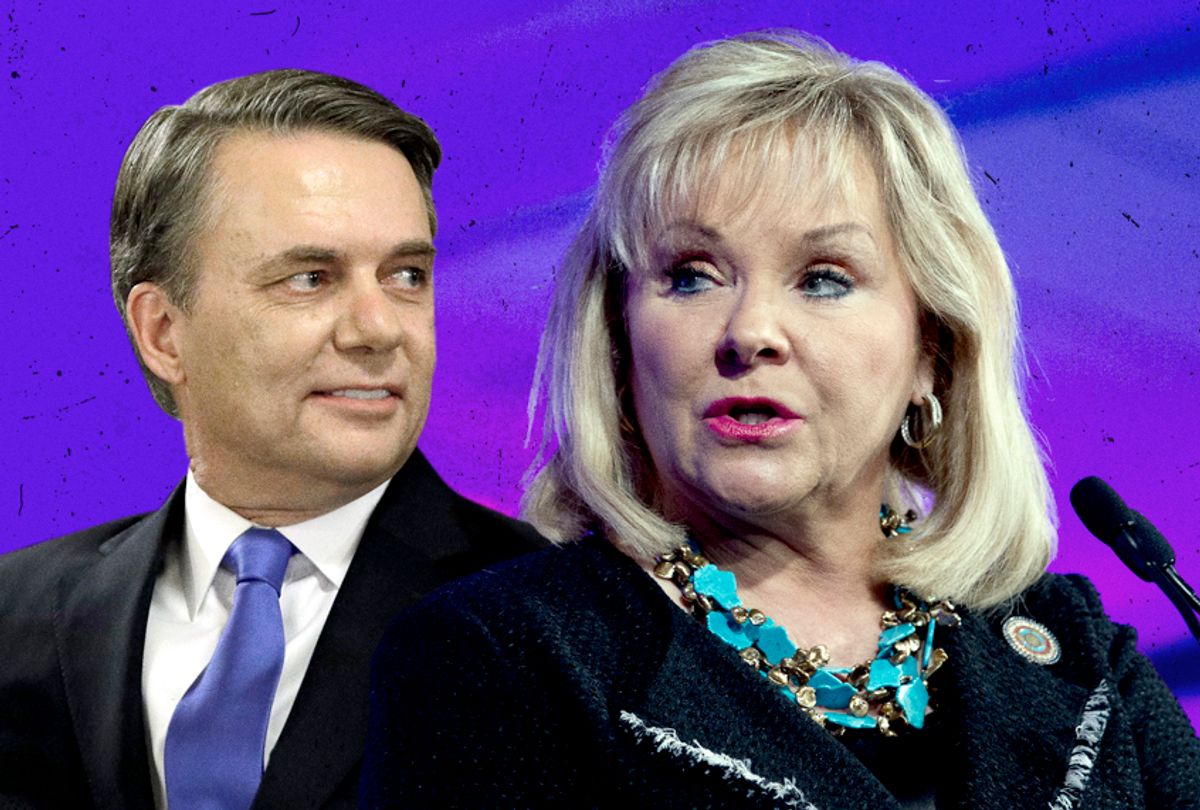 After taking a massive blow to its anti-LGBT agenda when the Supreme Court legalized same-sex marriage in 2015, the religious right continues to peck away at marriage equality, looking for new and supposedly legal ways to discriminate against LGBT people. One such ingenious strategy -- attacking same-sex adoptions and foster parents under the guise of "religious liberty" -- has been gaining traction.

Last week, Gov. Mary Fallin of Oklahoma, a Republican, signed a bill that allows child welfare agencies with government contracts to use religion as cover to discriminate against same-sex couples as foster or adoptive parents. That makes Oklahoma the eighth state to pass such a law. Kansas is expected to follow, as Gov. Jeff Colyer, another Republican, has promised to sign a similar bill that recently passed his state's legislature.

These laws aren't merely an attack on LGBT rights. They're also part of a far broader right-wing agenda opposed to secular government and children's rights. With President Trump busy stuffing the courts with far-right judges, arguably paid for by the religious right, there's a good chance these laws will open the door for a whole new wave of legislation that uses religion as a cudgel to undermine child welfare and genuine religious freedom.

“We’ve certainly seen a tactic from folks who oppose LGBT equality to use religion as an excuse" to ignore or evade anti-discrimination laws, explained Currey Cook, the director of a youth program for Lambda Legal. “It’s a reaction to what really is a sea change in the general public’s attitude towards LGBTQ equality."

Homophobic forces realize that they're losing public support rapidly, so the religious right may have concluded, as Cook puts it, “We better get something on the books that lets us continue to discriminate while we have the chance.”

So far the anti-LGBT forces of the far right have had little success with laws that exempt religious people from following existing discrimination law, added Dena Sher, assistant legislative director for Americans United for Separation of Church and State. "So they want to figure out where they can navigate the waters to stake a claim for this.”

That's what the Masterpiece Cakeshop case, which is still awaiting a Supreme Court decision, is really about: Trying to carve out space where discrimination is legal, with an eye towards expanding that circle in the future. As Cook explained, "Faith-based agencies have had a long history of being involved in the provision of child welfare services," so it makes some sense that this issue would become a focal point.

But the hope of both pro-LGBT and religious freedom groups is that because these agencies accept government money to provide these services, these pro-discrimination loopholes create a blatant violation of both religious freedom protections and equality protections. As Sher explained, while LGBT people are the primary target of the Oklahoma law, the actual text gives broad powers to religious groups to impose their beliefs, while taking and spending taxpayer dollars.

Such an agency "could discriminate against almost anyone," Sher said. "A same-sex couple, an interfaith couple, someone in a couple where one of the partners was previously divorced or someone who is, quote-unquote, the ‘wrong’ religion."

Not only could this law help set precedent for using tax money to subvert religious freedom, it could also open the door for another long-standing Christian right agenda item, undermining the rights of children. This law could potentially enable policies that would make it easier for religious conservatives to impose their faith on children, or even to remove children from their families of origin.

The Multiethnic Placement Act of 1994 (MEPA) requires government child welfare services, and those groups that contract them, to put the best interests of a child above all other considerations. But the pro-discrimination laws "completely flip the paradigm for how child welfare systems operate," Cook argued, because they "actually enshrine in statute" that a provider’s interests can come first.

There are real concerns that some faith-based groups that contract with the government disagree with numerous governmental goals and regulations, such as those protecting foster children from forcible religious conversion. Some advocates also worry also that adoption-focused religious organizations might be overly eager to break up families of origin in order to increase the numbers of adoptable children. Right now, the "best interests of the child" standard gets in the way, but laws like Oklahoma's could undermine that.

Kansas, whose legislature passed a similar bill that is likely to become law any day now, illustrates the seriousness of undermining the "best interest of the child" standard. The foster care system in that state is so backed up that children are often forced to sleep on the floor of the child welfare offices. Equality Kansas, a pro-LGBT group, recently tweeted that a lobbyist working to pass the law in question "told our director earlier this month that it would be better for these kids to sleep on DCF office floors" than to be placed with same-sex couples.

Many activists believe that the solution to the problem is to shore up MEPA's rules against discrimination. That would require Congress to explicitly bar agencies from discriminating on the basis of sexual orientation, gender identity or marital status. Last summer, Sen. Kirsten Gillibrand, D-N.Y., sponsored a bill, the Every Child Deserves A Family Act, that would do just that. To no one's surprise, it has gone nowhere in a Republican-controlled Senate.

Still, as Samantha Allen of the Daily Beast writes, there are legal challenges to these laws currently underway, with the ACLU and Lambda Legal leading the way. Even under current law, there's good reason to believe that First Amendment restrictions should prevent government contractors from discriminating on the basis of religion, and also that the "best interests of the child" standard will prevail. It helps that the Supreme Court's historic marriage-equality decision, Obergefell v Hodges, was supported by mountains of research showing no difference in outcomes between kids raised in same-sex and opposite-sex couple households.

“Kids deserve loving, stable homes, but this bill allows child welfare agencies to deny children these homes," Sher said. Some Republican politicians are apparently ready to force kids to sleep on dirty floors than to admit that LGBT parents are just as good as straight ones.

A landmark case that pits LGBT rights against "religious freedom" has now reached the highest court in the land.