There's a sudden spike in high-profile anti-Hispanic incidents: But why?

From the Aaron Schlossberg incident to the "beaner" Starbucks cup, anti-Latino bigotry is making headlines 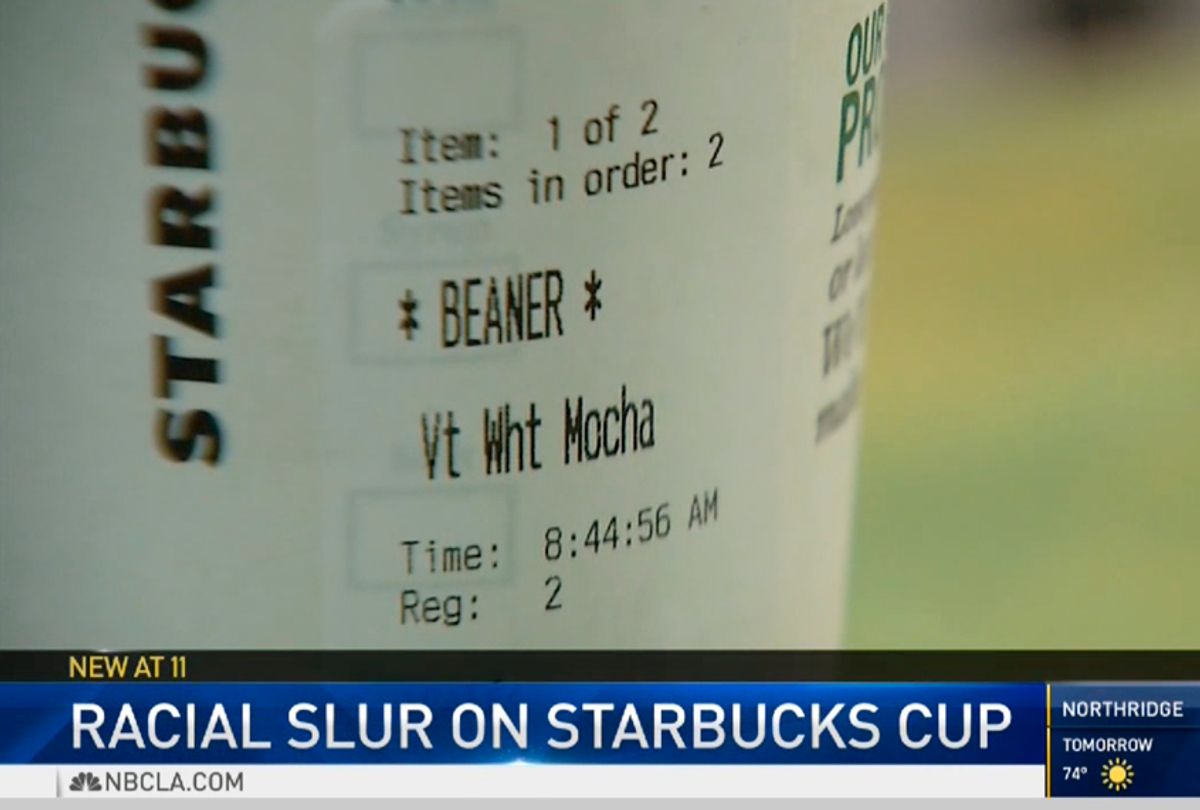 There has been a noted rise in high-profile anti-Hispanic incidents this week. It's hard to avoid concluding that when you elect a president who kicked off his campaign with a speech claiming that undocumented Mexican immigrants are murderers and rapists, this is what you get.

That president, Donald Trump, was one of this week's perpetrators, delivering a speech in which he used the term "animals" when discussing the problem of undocumented immigrants.

"We have people coming into the country, or trying to come in — and we're stopping a lot of them — but we're taking people out of the country. You wouldn't believe how bad these people are. These aren't people. These are animals. And we're taking them out of the country at a level and at a rate that's never happened before," Trump said during a roundtable White House discussion on undocumented immigration, according to CNN.

While some people have defended Trump (including the author of that CNN article) by noting that he was referring to members of the MS-13 gang rather than all undocumented immigrants, the reality remains that he used a dehumanizing term — one that has a long history of racialized usage — to refer to members of a nonwhite group. This arguably normalizes the idea that it is acceptable to use racial insults against members of a minority if they commit crimes or engage in antisocial behavior.

Trump, for what it's worth, has been characteristically unapologetic.

"I’m referring, and you know I’m referring, to the MS-13 gangs that are coming in. We have laws that are laughed at on immigration. So when the MS-13 comes in, when the other gang members come into our country, I refer to them as animals. And guess what — I always will," Trump told a reporter who asked him about the comment on Thursday, according to the New York Times.

Another high-profile incident occurred on Tuesday when Aaron Schlossberg, a New York lawyer, was recorded berating employees and customers at a Manhattan eatery for speaking Spanish in his presence.

"Your staff is speaking Spanish to customers when they should be speaking English. Every person I listen to: He spoke it, he spoke it, she’s speaking it," Schlossberg was heard to say, according to the Washington Post.

In a cell-phone video that rapidly went viral, Schlossberg threatened the individuals he had been haranguing, saying he would call ICE and get them deported from the country for speaking Spanish in a public place.

"This guy should know better. When you’re an attorney, you’re telling your clients what you should say and how you should conduct yourself. Where in the Constitution or the law does it say that in a public place that you can’t use another language other than English? And then to add insult to injury he threatens to harass these people and that he will call ICE," Díaz told the Post.

Schlossberg is reportedly a Trump supporter, having donated $500 to his campaign. This can hardly be considered surprising.

Finally there was the incident on Wednesday when a Latino man at a Starbucks store in Los Angeles was targeted with a racial slur on his coffee cup. A customer who only referred to himself as Pedro says that he ordered two cups of coffee and both had the term "Beaner" printed on the side, according to USA Today. As the publication reported:

Pedro said he didn't think it was an accident because the barista had called his name once his order was done, according to the TV station. He declined the offer of a $50 gift card, which he called "insulting," but he's scheduled to meet with Starbucks officials on Thursday.

Starbucks said in an e-mail that company officials met with the customer Thursday morning at one of the local stores and that he accepted their apology.

"This kind of mistake is unacceptable and we will take additional steps to assess what happened here and how our partners can be better," Starbucks said.

It's easy enough to condemn each of these individual incidents on their own terms: The president shouldn't refer to human beings as "animals" no matter what they've (allegedly) done, no one has the right to berate others for speaking whatever language they want in public, people who use casual racial slurs ought to be condemned.

But when it comes to the Hispanic community, the intolerance that has been highlighted this week has been baked right into the brand of Trump's America. It explains this little tidbit from Pew Hispanic that was released in February 2017, one month after Trump's presidency began:

At least in theory, the United States is a nation built on mutual respect and tolerance -- in the most literal sense, a nation of immigrants. These incidents of anti-Hispanic prejudice over the past week, each of which was minor in itself, make clear how much that vision of America is being tested by our current political and social crisis.