In a throwback to '90s culture-war politics, far right desperately searches for "causes" of school shootings 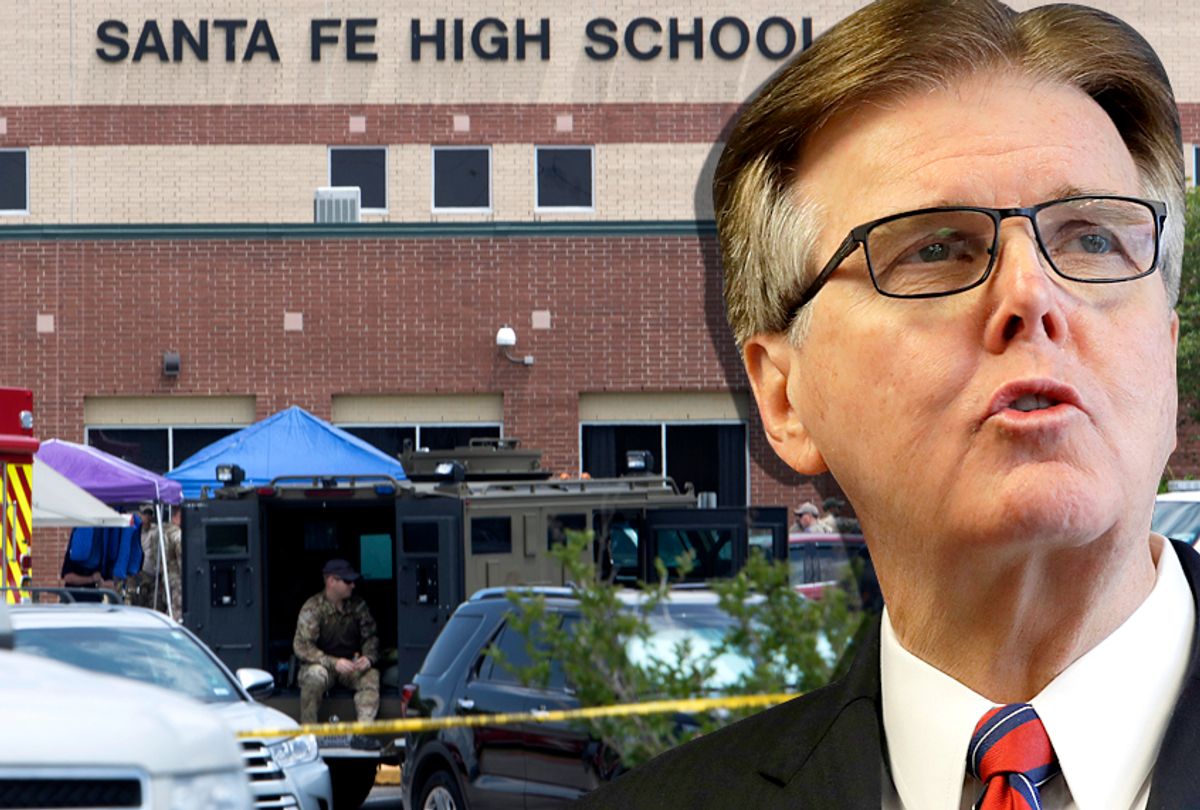 The lieutenant governor of Texas is continuing a longstanding tradition among right-wingers — blaming mass shootings on anything, anything in the world, other than the prevalence of guns in our society.

Lt. Gov. Dan Patrick, a leading figure on the far right of the Texas Republican Party, is facing harsh scrutiny for comments made after Friday's school shooting in Santa Fe, Texas, in which he blamed a long list of culprits for mass shootings that conveniently did not include guns. In remarks delivered on Sunday, Patrick pointed the blame at everything from violent video games (a popular scapegoat since the Columbine High School shooting in 1999) to the lack of religion in our public schools, according to CNN.

"The video games issue, we have got to address in this country," Patrick said. "Based on all the research we have done, 97 percent, according to psychologists and psychiatrists . . . of teenagers view video games, and 85 percent of those video games are violent." He added that these games show users how to "kill people" and insisted that "the vast majority [of mental health professionals] will tell you it leads them to become numb to violence, to have less empathy to their victims and be more aggressive. Does that impact everyone who views them? No, but it obviously is part of the problem."

In a series of experiments, with more than 3,000 participants, the team demonstrated that video game concepts do not "prime" players to behave in certain ways and that increasing the realism of violent video games does not necessarily increase aggression in game players.

Patrick also talked about "culture" and claimed that America's loss of religious faith could be blamed for the increase in violence. As he put it in his remarks, "We have devalued life in this country. We threw God out of school." Patrick also claimed that old-fashioned family values were needed, striking a familiar theme that America is plagued by "families that are broken apart, no fathers at home."

Once again, academic research simply does not support Patrick's assertion. In fact, a March 2009 article in Sociology Compass found that "murder rates are actually lower in more secular nations and higher in more religious nations where belief in God is widespread." The study yielded similar conclusions when comparing more religious states to less religious states. It also cited a 1999 study which found that, at the time, atheists and agnostics had lower divorce rates than religious Americans.

Patrick also deployed an argument that has become increasingly popular among the pro-gun movement since the Parkland school shooting in February — that America should arm its teachers.

As Salon's Lucian K. Truscott IV explained in February, the notion that arming teachers would stop school shooters falls apart the moment you try to inspect it closely. Even if teachers were trained as well as soldiers and police officers in how to use their firearms (a dubious proposition at best), there is still the reality that even experts at using firearms often miss their targets or hit innocent bystanders. There is little reason to believe that arming teachers wouldn't simply make the ongoing crisis even worse.

Of course, one of the obstacles in figuring out whether gun control policies could reduce the number of mass shootings is that the NRA and a Republican-majority Congress pressured the Centers for Disease Control and Prevention into ending its research into the impact of gun control policies on firearm injuries and deaths back in 1996. As The Washington Post reported last year:

In 1996, the Republican-majority Congress threatened to strip funding from the Centers for Disease Control and Prevention unless it stopped funding research into firearm injuries and deaths. The National Rifle Association accused the CDC of promoting gun control. As a result, the CDC stopped funding gun-control research — which had a chilling effect far beyond the agency, drying up money for almost all public health studies of the issue nationwide.

Thanks to the pro-gun movement stifling comprehensive research on the effect of gun control policies, it has become much easier for organizations that oppose gun control to throw up a smokescreen around the issue. While Patrick's recent comments have been singled out for their blatant ridiculousness, using a wide range of culture-war issues to distract Americans from the obvious solution of more stringent firearm regulation has long been a popular tactic among the pro-gun movement.

Earlier this week, incoming NRA President Oliver North blamed the recent flurry of school shootings on "youngsters who are steeped in a culture of violence," as well as on drugs like Ritalin. After a mass shooter killed 49 people at the Pulse nightclub in Orlando in June 2016, an NRA official blamed "political correctness" from President Barack Obama's administration, according to NBC News. That same official blamed Obama's foreign policies after a Muslim couple killed 14 people at an office party in San Bernardino, California.

After a mass shooting at a church in South Carolina left nine people dead in 2015, an NRA official in that state wrote that the blame should be placed at the feet of one of the victims — State Rep. George C. Pinckney, who was also a pastor — for opposing a concealed-carry law. A similar argument was made by NRA Executive Vice President Wayne LaPierre after a shooting at the Washington Navy Yard in 2013 left 12 people dead. LaPierre claimed that "there weren’t enough good guys with guns" to stop the shooter.

He made much the same claim after the Sandy Hook Elementary School shooting that shocked the world in 2012. "The only thing that stops a bad guy with a gun is a good guy with a gun. With all the money in the federal budget, can’t we afford to put a police officer in every single school?" LaPierre asked.