"This Is America" roundtable: Is Donald Glover a genius? 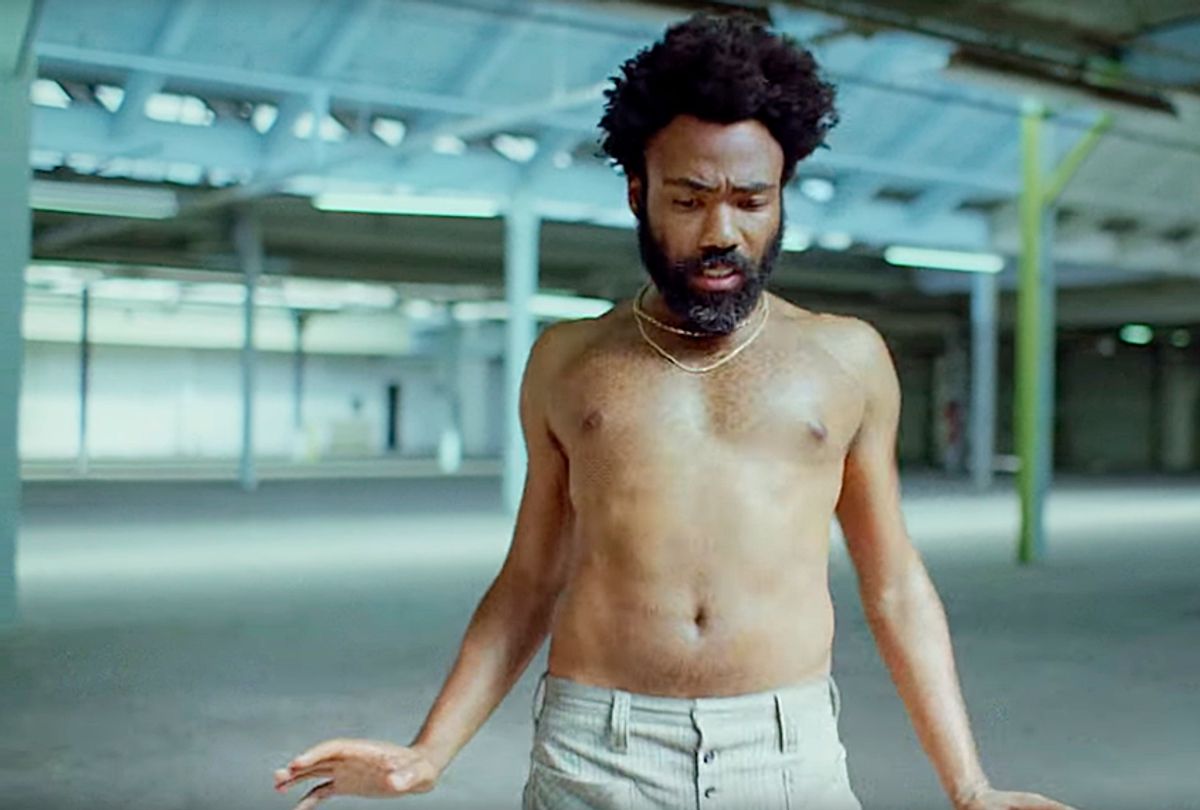 “This is America” by Childish Gambino (YouTube/Donald Glover)
--

Childish Gambino — aka actor/director/writer Donald Glover — has kept the number one spot on the Billboard Hot 100 for two weeks in a row with his single "This Is America." Meanwhile, the imagery and iconography in Glover's video has kept culture critics talking since it dropped on May 5. Danielle Young, a producer, host and writer at The Root, and Damien Scott, editor in chief of Complex magazine, joined me on a recent episode of "Salon Talks" to discuss how and why "This Is America" has captured the country's attention. Here's a sample of our conversation — you can watch the video for the whole round table talk.

D. Watkins: Was it amazing? Was it genius? Was it problematic? Was it a waste of time?

Danielle Young: It was so many things. The black experience in general is what it was. And that to me is a lot of things. It's multi-layered. I'm really curious, because we're really quick — and not to be like, I'm the woman in the room — but we are really quick to label men as geniuses, right? I’m not saying that to take away from Donald's genius, because I do believe he is that, but when are we going to label some women geniuses? When Solange did a whole album?

So I don’t want to bestow genius upon it [but] I think it's amazing.

Watch the full conversation on "This Is America"

A lot of times when the media hails somebody a genius, these are people who are only interacting or interacting with a whole lot of other people in media.

I think it's an inclusion problem.

Scott: Donald does this, and he has a lot of the same iconography that Beyoncé and Solange have in their videos. Beyoncé literary drowned a police car. I think that needs to called genius as well.

Young: That needs to be called genius, and also because Beyoncé is not known to speak out. Do you know what I mean? I think a lot of it has to do with culturally, beyond the black culture, a lot of people regard Beyoncé as musically amazing but not smart. We have these parameters that we like to judge people in and Donald fits into this smart category, because of what he's done with this video, he’s artistic, and in "Atlanta" and pretty much everything we see in him right now his whole persona is that of a young boss.

Young: Yeah, because she's a little off center.

Scott: Right, they're like she must be smart because she's so quirky.

Whereas you could be smart and extremely pop.

What do you think is so different about his video? Why is everyone talking about this? Because Donald Glover has been making music for some time now, but a lot of people haven't really — admittedly, myself — haven’t really been paying attention to it until the success of "Atlanta."

"Atlanta" is my favorite show. I would rather watch "Atlanta" than eat dinner with my parents.

Scott: I find interesting the way black people now treat Donald Glover and Jordan Peele. Years ago, no one would give them the time of day. Dave Chappelle completely shitted on Jordan Peele and [Keegan Michael] Key, and they were like in his standup he was like, "Those guys stole my show. Who the hell . . ?"

Young: As if he created it. I always respected Dave, but as if you created standup and skits.

Scott: But black people were like, "Yeah f**k those guys." I have friends of mine who were like, man that show, his initial show, they're shucking and jiving, and I was like, it's not "The Chappelle Show" but I don’t think it's that . . . that’s a heavy thing to say.

With Donald Glover, this music he was making was never accepted by . . . I would say the barber shop crew. You would never go to a barber shop and hear people talking about "Camp."

The song would have no relevance because now we don’t just see him as quirky Donald Glover, we see him as Earn who manages Paperboy, getting tired of Paperboy sitting on the couch too much, that he makes his own song.

Scott: I think we see him more as a raconteur who's transcribing the black experience in a real authentic way for us. Black people love him for that, they're like, yes, this is one of the only times in a long time that we've seen our experience really accurately portrayed on TV. Thank you, thank you, thank you, we love you for that, you're a genius.

Danielle, you made a really interesting video on The Root that I thought was very funny and very informative. Do you feel like because Donald Glover is [in a relationship] with a white woman, he's not the person to make a song addressing issues that black Americans face?

Young: So let me make it perfectly clear for the headline readers . . . I think people see that and they think, I'm a black woman, so they automatically think that I err on the side of I'm so mad about it that he is with a white girl. That is not the case.

I love Donald Glover. I think he is amazing, but I'm not mad about this white woman being with him and making a family with him. I'm a believer of love is love no matter what it is. But I'm always curious about these super, like black is everything, pro-black men who are powerful and who have platforms and who create art that is inherently black, and they go home to their white woman, and I'm curious about that because I feel like when you are in these relationships, they're a partnership.

When we go home, and we have to deal with these traumas every single day, it's nice to go home to be able to download that or even, because I work at The Root, to be able to go into work and download with people that are like me about what's happening.

I'm not saying that that's not possible when you're with a partner who is outside of the black race, but I am saying that it is something that you kind of have to start at the ground level every time.

I feel like a lot of times when these celebrities, when they say things that really, really engage us and make us excited, we propel them to this level of being revolutionary, and I don’t think that's always true.

Young: He's also a human being that's figuring it out as an artist; he is processing it in the same way that we are.