Yes, "This Is America": Donald Glover makes us confront our country's violent horrors 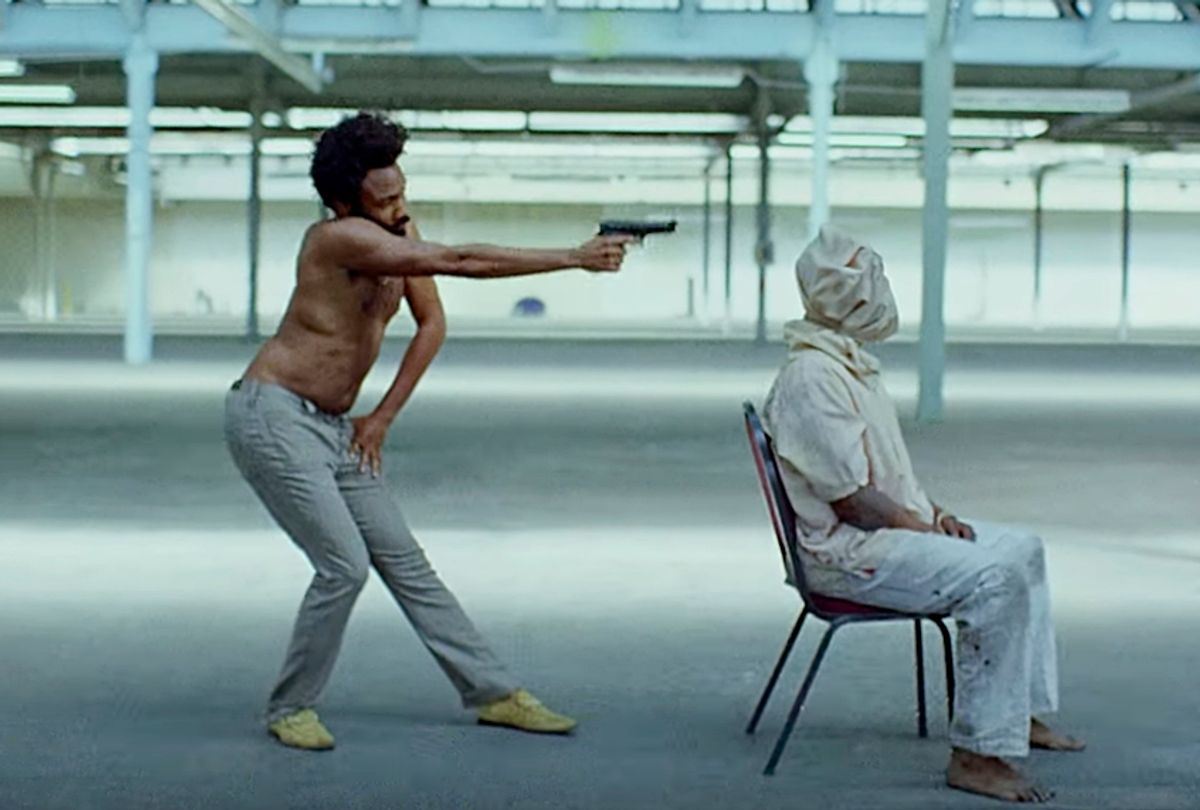 "This Is America" video by Childish Gambino (YouTube/Donald Glover)
--

This weekend Donald Glover took a long shot at genius and scored­­ — nothing but net.

I’m not talking about his already-impressive career history: of being a 23-year-old writer on "30 Rock," the Emmys he won last year as an actor and director for the first season of his acclaimed FX show "Atlanta" or the 2016 Grammy he won for "Red Bone." These are all great accomplishments that have earned him constant praise and enough clout to be named one of Time’s 100 Most Influential People last year. But I'm not here to focus on that.

Yesterday, the 34-year-old renaissance millennial shattered the internet into a billion pieces with his new song and video, "This Is America."

Directed by "Atlanta" director Hiro Murai, the video opens inside a huge warehouse with an acoustic guitar perched in a chair, begging to be played. Once that wish is granted, we see Childish Gambino (Glover's stage name) standing alert and erect until the beat drops and he starts gyrating in playful winding motions­­­­. These are moves you don't expect. They catch you completely off guard, and just as you begin to accept them, he pulls a gun from the small of his back, fixes his body in a perfect Jim Crow pose, and blows a hooded and cuffed dude's head off.

I first thought of Oscar Grant, an unarmed African-American man from Oakland who was murdered by police while wearing handcuffs. Then Walter Scott, another unarmed man shot in the back during a traffic stop.

With no pauses for reflection or mourning, Gambino keeps dancing while passing off the gun with the utmost care as the dead body is dragged away like a sack of trash.

“I love him, because he’s rejecting toxic masculinity with his sensual feminine dance moves!” my friend Ebony texted me. “Black boy joy! Y'all dudes need to pay attention!”

I watched the video again and heard what she was saying, but I didn’t feel it. The soft moves could definitely be that kind of layer; however, I don’t think that was the main point. That's why I recommend watching the video four or five times on a device larger than a cell phone before forming an opinion, because there is so much to see.

I think the dancing, along with Glover's almost manic smile and upbeat vibe, is offered up as a distraction, to direct the viewer's attention away from the chaos in the background. It’s as if Glover is playing with the audience­­, forcing us to look at him and celebrate him — like my friend Ebony did, like I did on the first viewing, and like most of us who willingly and totally ignored the world behind him crumbling and on fire, in the same way we turn a blind eye to so many horrible things that happen in the world every day.

The song employs repetition with a clear message — this is America — because what he is showing metaphorically is the condition of this country: A person can be shot in the head and our attention can be distracted almost immediately away from that by a hot movie, viral story, social media trend or an outburst from the president, and just like that, the murder, along with any empathy for the victim and family, is pushed magically out of the conversation­­. This is especially true if a police officer was the trigger man.

Gambino continues to dance. Encountering a church choir, singing with angelic voices, he spends time in fellowship with them — similar to the way Dylann Roof did in Charleston — and then he takes out a gun and murders them in cold blood, just like Dylann Roof did. The people are left to bleed. Just like earlier, the gun is passed off to another person and wiped down with care, seemingly valued more than the bloody choir members piled up, slumped over on the stage.

This video couldn’t be delivered at a more appropriate time­­, on the heels of the Las Vegas and Parkland massacres, as the killing of Stephon Clark, another unarmed African-American man, is being investigated. Glover is holding a mirror up to the ugliest parts of this country, where these tragedies happen over and over again­­, proving that they aren’t freak accidents but a part of a disgusting tradition of violence we aren't willing to break. This is a country of gun-praising murderers, where we freely and proudly kill people. This is a country that ignores the pain of broken families, only to buy more guns and break them again.

U-God: Machine guns have no purpose

Wu-Tang Clan member U-God challenges the notion that gun control is a violation of the Second Amendment.