"Arrested Development" returns and there's something rotten in the banana stand

The headlines surrounding the same-as-ever fifth season make its return awkward, and not in a good way 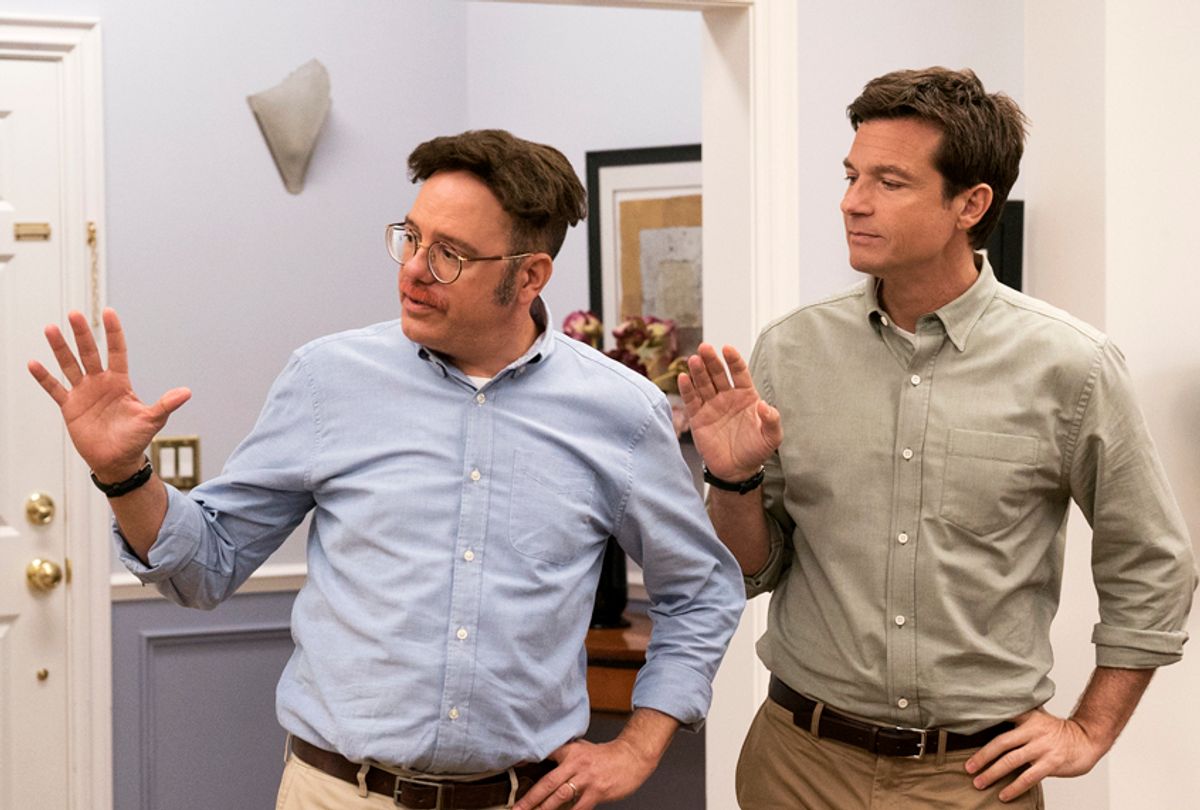 This is weird, right? It’s weird.

“Arrested Development” will return to Netflix next Tuesday after a five-year absence that, in itself, was preceded by a seven-year absence following its cancellation on Fox.

This series has been in existence for 15 years, and a few of its elaborate in-jokes are still rolling even after all this time, which is either impressive or played out or well, weird.

Revivals are very much in season, I’ll grant you, and that makes this second second coming of “Arrested Development,” coming to Netflix on Tuesday, completely in line with what the rest of the television industry is doing. Ostensibly it’s what the audience wants: When Netflix and series creator Mitch Hurwitz announced the fifth season in 2017 the media and fans met the news with febrile elation and zero questioning of its relevance.

That’s because “Arrested Development” still kind of works. After all these years there’s still nothing really like it on television. No comedy has proven as successful in linking the multiple limited perspectives of of profoundly myopic, silly individuals, asking us to laugh at their misinterpretations of events and their disastrous near misses. And no comedy can get away as successfully with recurring gags that reference incest, awkward liaisons and “never nudity.”

Who’s up for a fresh round of French farce-style physical humor and new parades of puns? We can’t tell, because Netflix doesn’t release viewership data; all we know is that the reaction was underwhelming.

Anyway, who cares? Netflix doesn’t. Hurwitz and his fellow executive producers Brian Grazer and Ron Howard (who serves as the series' narrator) were not deterred. Hurwitz recently released a re-cut version of the long and narratively wandering fourth season that smooths out the plot, earning praise for doing so but, beyond this, not exactly setting the world aflame.

The average pop culture consumer enjoys the stars of “Arrested Development” together and separately — these days, mostly separately.

Alia Shawkat (Maeby Fünke) has been killing it on TBS’s “Search Party.” David Cross (Tobias Fünke),  Will Arnett (Gob), Tony Hale (Buster Bluth), Portia Rossi (Lindsay Bluth Fünke) are all busy with other projects. Most fabulously Jessica Walter (Lucille Bluth) has been slaying it as Archer’s mother on FX’s “Archer” with just her voice.

A lot of stuff happens in 15 years, as Bateman observed in a recent conversation we’re about to dig into. Hell, a lot can change in a year.

This brings us back to, you know, that weirdness. Jeffrey Tambor is back in the fifth season as well,  reprising George Bluth Sr. and his twin Oscar.

As a reminder, Tambor was accused last fall of inappropriate behavior on the set of Amazon’s “Transparent.”  He was fired from that series following a multiple season run that earned him several Emmys and Golden Globes, and praise and criticism alike for his portrayal of Maura Pfefferman, a transgender woman and head of the dysfunctional Pfefferman clan.

A few weeks ago The Hollywood Reporter ran a profile of Tambor in which he insists on his innocence and is contrite about being verbally abusive on past projects, naming “Transparent” creator Jill Soloway and another executive producer among the targets of his abuse. “She told me recently she was afraid of me,” Tambor says of Soloway.

In that story Tambor also confesses that one of the people to whom he was verbally abusive was Walter.

On Wednesday, the New York Times published an article by Sopan Deb featuring a Q&A with members of cast, during which the conversation circled around to the Hollywood Reporter article’s mention of Tambor’s past behavior towards Walter.

Here’s one of the most telling section in context. Deb says to Tambor, “You talked about how you yelled at directors, assistant directors, the 'Transparent' creator Jill Soloway. You even said at one point you lashed out at —”

Walter interjects to finish the sentence: “Jessica Walter.” The response to this according to the transcript:

“Which we’ve all done, by the way,” Bateman says.

“Not to belittle what happened,” continues Bateman, leading Walter to say, again, "You’ve never yelled at me like that.”

“But this is a family and families, you know, have love, laughter, arguments — again, not to belittle it, but a lot of stuff happens in 15 years. I know nothing about “Transparent” but I do know a lot about “Arrested Development.” And I can say that no matter what anybody in this room has ever done — and we’ve all done a lot, with each other, for each other, against each other — I wouldn’t trade it for the world and I have zero complaints.”

Yes. We're all very relieved that he has no complaints. Walter, as Deb notes, wept at the memory of the incident. “In like almost 60 years of working,” she says, “I've never had anybody yell at me like that on a set."

This important declaration cuts to the heart of the question, and the nagging problem of witnessing this show in the wake of it. Even if Tambor didn’t sexually harass anyone on “Arrested” he’s still getting a pass from his male co-workers for verbally berating his female co-star so brutally that the memory of it makes her weep.

“Let me just say one thing that I just realized in this conversation,” Walter says at one point, as the transcript notes, through tears. “I have to let go of being angry at him. He never crossed the line on our show, with any, you know, sexual whatever. Verbally, yes, he harassed me, but he did apologize. I have to let it go.”

And in that moment, with Walter crying in front of them, Bateman, Hale, Cross and Arnett do somersaults to mansplain away the gravity of the situation and to reinforce their support for Tambor. Some award-winning actors are just passionate, they say in so many words (“But that doesn’t mean it’s acceptable,” Shawkat interjects before the men slide her to the back burner ) but it’s all good now!  So let’s all just watch the fifth season and enjoy new versions of those classic in-jokes we all love.

Awkward. Just not in a ha-ha, “Arrested Development” way.

Admittedly a number of “Arrested Development” fans may choose to know only the vaguest outlines of Tambor’s story, and take the New York Times article at face value, if they read it at all. This is in line with the way we’ve approached previous seasons. The less we know about the overall direction of any “Arrested” arc, the funnier the experience of watching its slow-motion car crash of jokes becomes.

If you’re one of those people, simply apply your approach to the art to the artists themselves.  Because the more you know about what’s happened with Tambor over the past 12 months and the cast’s attempt to reframe it, the emptier the comedy’s absurdist spectacle becomes.

That said, even if you only have the faintest idea of what has transpired with the cast, our first view of Tambor’s George Sr. is a visual gag meant to pay homage to his success on “Transparent.” It probably lands best with mild amnesiacs.

Get past that, and a few other details, and what stands out is the sameness of the scenario and the extent to which season 4 stampeded so far afield of common sense as to require more extensive set-up and narration throughout these new episodes to set up the latest iteration of a joke.

The assumption seems to be that the audience is so enamored of rekindling old times that the writers don’t have to work very hard to freshen its framework or take a whetstone to its signature wit. They do get some mileage out of a few obligatory guest star cameos, and a storyline revolving around a proposed wall at the Mexico border that ran in those 2013 episodes. See? It actually used to be ahead of its time.

Beyond that, the only innovation in these new “Arrested Development” episodes is how the story processes tensions between Michael and George Michael, who remain in love with the same woman (Isla Fischer), leading to one confrontation that is, I’ll admit, fairly amazing.

Otherwise what Netflix has shown reviewers of this fifth season (seven of the eight to be released on May 29 were made available to critics, with eight more coming later) doesn’t justify the continued revisitations to the Bluths. Michael is still trying to leave but keeps getting pulled back; Gob can’t figure himself out, a quest he’s been on since the George W. Bush administration; Lindsay is as selfish and needy as ever; Maeby still teases and tempts her cousin George Michael. And Lucille, bless her forked tongue and all its utterances, remains devoted to her “anytime is the right time for a cocktail” ethos.

Wouldn’t it be great if we could think of “Arrested Development” as a time machine? But we can’t. Even if we can get past the weirdness and the knowledge that we’re watching a showbiz family pretending everything is OK playing a sitcom family pretending everything is OK, there’s still no way to ignore the perfume of overripeness to this banana stand.

Then again, some people think old fruit makes for the best desserts. Those folks are welcome to these new episodes of “Arrested Development” and their conventional comfortableness.  Others may simply notice that the squeamish weirdness of the show comes of as a relic of a different time. And I may have to let it go.

The star of "Arrested Development" and "Search Party" reflects on how women are treated on set.