How the media portrays black and white drug users differently 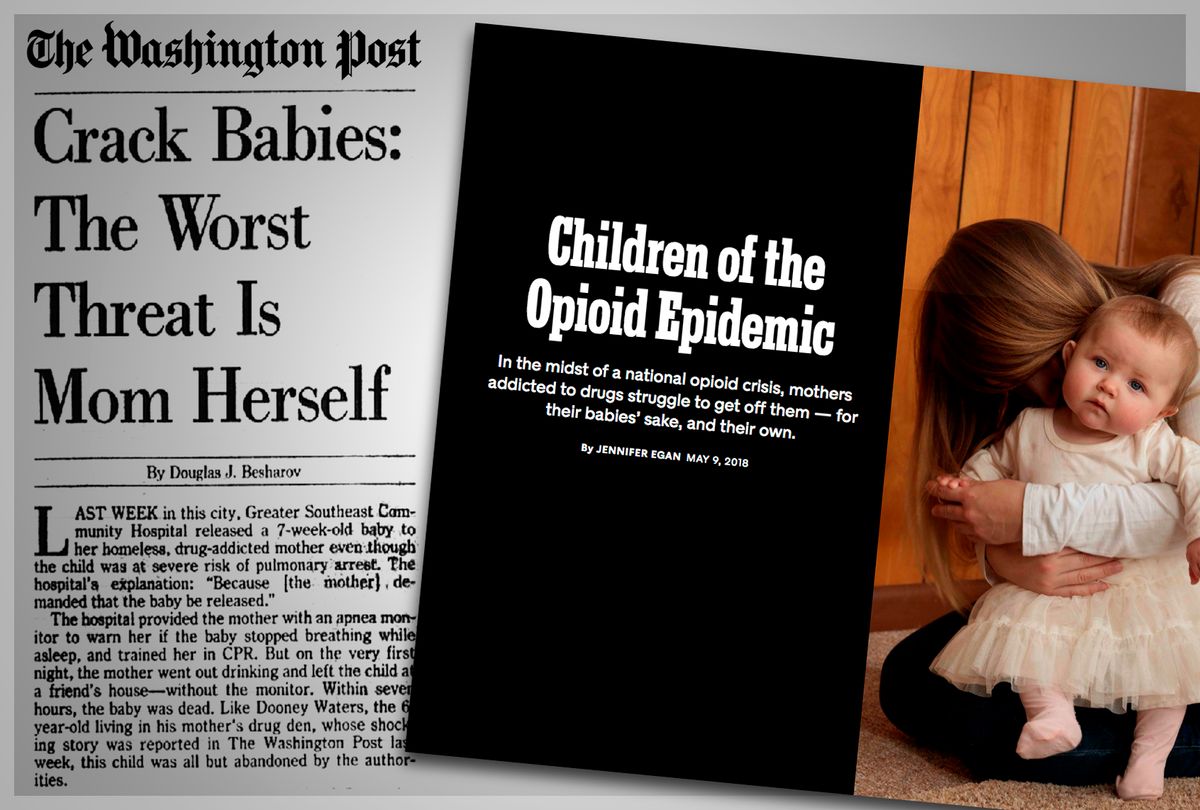 On Mother’s day, New York Times Magazine published a cover story titled “Children of the Opioid Epidemic.” The photo on the cover of the magazine was the image of a young white mother holding a cherub-like infant dressed in pink stockings and lace. The mother is on her knees, gently kissing her daughter’s neck, her face is obscured. The image goes to great lengths to protect the mother and the child – they are both innocent victims of an opioid epidemic. The article begins with the story of Alicia, the setup immediately renders Alicia’s humanity. She struggled with drugs and alcohol from a young age, her family had bouts with both substance misuse and mental illness, her mother acting as the glue held the family together in the suburbs of Rhode Island. We learn of Alicia’s dreams and her struggles before ever learning of her addiction to Percocet medication. Even as Alicia’s use bloomed, the writer recognized Alicia’s need to use the drugs as a coping tool, to calm her anxieties, to quiet the voices that drove her toward self-sabotage.  Alicia’s drug use didn’t diminish her humanity; it made it more salient, more immutable.

The lives of the women profiled in the story are complex and the writer makes great effort to mute her judgments and witness the mothers nurturing their children. Because of this thoughtful observing, the women are shown in their wholeness. But the writer also uses descriptors that highlight the whiteness of her subjects. She highlights Alicia’s blond hair, a flaxen-haired child, and another’s hazel eyes. In a way, this is as much a story about the redemptive power of whiteness as it is about opioid use.

The New York Times, like many major publications that have reported on the opioid epidemic, has a history of covering societal drug use.  Often, publications reference the differential response to the opioid epidemic and the way that race has influenced political response. Coverage of the opioid epidemic alludes to the “cultural overreaction” to the “crack baby” and the panic over crack use in general. Less often do publications take responsibility for the role they played in influencing the way people respond to drug users. Observers who immediately and rightfully took issue with the Times' portrayal of the children of the opioid epidemic took to social media to voice their discontent. Those who took issue with coverage did it out of frustration; their memories are not short. They recall the dehumanization of black women and their children, who did not benefit from the gentle words of a famed novelist.  It is apt that the light shone on the New York Times, a publication that proffered racist and sensationalized journalism depicting black people as sex-crazed cocaine addicts and black children born to mothers who used cocaine as broken and irredeemable.  It is not hyperbolic to claim that the New York Times had a role in the creation of the modern war on drugs, one it now deems to be a failure.

The New York Times and other major national publications fanned the flames of the drug war, and have now pivoted their coverage to protect white victims and whiteness. Telling stories in a way that allows people to exist beyond their drug use is not the issue; it should be standard practice. What is surprising is that the New York Times and other publications have not done the work of looking through the archives to see the harm they have caused historically and presently – especially the harm done to black mothers.

Beginning in the late '80s, the New York Times began to publish exposes on children born to mothers who used cocaine. The Times liberally used the moniker “Crack Babies” and “Drug Babies” to describe newborns, therefore associating them with a criminalized substance, creating the narrative of a generation of diseased children. On Mother’s Day in 1989, the Times published an article decrying the fact that Mother’s Day this year will be spent thinking about babies tethered to tubes in the intensive care units who will eventually be turned over to foster care, instead of thinking of fancy strollers and bassinets. Journalists followed these children of this era to school to monitor their development and to witness the children born of the collective fears of white America. When the hysteria had quieted and research proved that the physical, mental and emotional tolls of neonatal exposure to cocaine were significantly exaggerated, journalists placed blame on the research, not the media institutions that profited from the pain of black mothers.

Presently, black women are still feeling the toll of the stories told about them and their pain. Black children remain overrepresented in the child welfare system. Black women and their children are more likely to be tested for drugs without their consent. When their children are taken away by child protective services, they are made to jump through countless hoops to regain custody of their children and if they are unable to meet the demands of the family court they are told to just figure it out.

Black motherhood is a high-risk endeavor and little empathy is given to those who fall short of societal expectations. The New York Times and other major media publications are not totally responsible for the systemic racism that leaves black motherhood at the societal fringe, but they are crucial part of the mechanism.  I don’t know how the media can atone for their actions in shaping the narratives of the drug war, but acknowledging the harm they caused is a start.

Next Mother’s Day, we should tell the stories of black mothers whose pain goes unacknowledged.

Joyce McMillan is the director of Programming and Parent Advocate at Child Welfare Organizing Project.