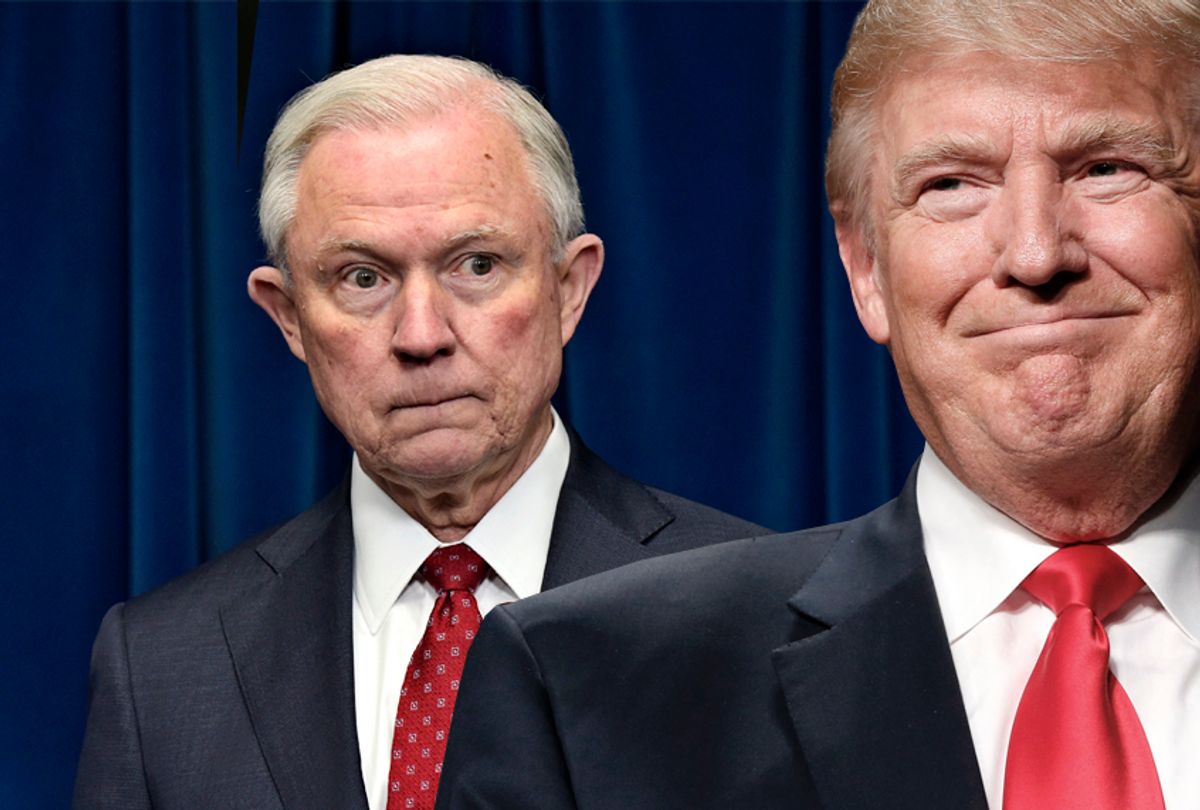 President Donald Trump said Wednesday he wishes he hadn't chosen Jeff Sessions as attorney general, a continuation of the president's frustrations over Sessions' decision to recuse himself from the ongoing investigation into Russia meddling in the 2016 presidential election.

Quoting Rep. Trey Gowdy, R-S.C., who said on "CBS This Morning" earlier Wednesday that Trump "could have picked somebody else" for the position, Trump tweeted, "I wish I did!"

The South Carolina Republican congressman was responding to a question about whether Trump may have obstructed justice in reportedly pressuring Sessions in March 2017 to reverse his decision to step aside from oversight of the Russia investigation, as The New York Times reported Tuesday. Special Counsel Robert Mueller is now probing that confrontation, according to the newspaper. Gowdy said he believed Trump was "expressing frustration" that Sessions should have shared his reasons for stepping aside from the probe before accepting the position of attorney general.

Trump has frequently blasted Sessions over his recusal, which led the way for Deputy Attorney General Rod Rosenstein to appoint Special Counsel Robert Mueller to investigate Russian interference in the 2016 election. Trump, according to The New York Times, has said he needs an attorney general who will protect him.

In an interview with The New York Times last July, Trump, citing the recusal, said he would not have hired Sessions to be his attorney general if he knew Sessions would step away from overseeing matters related to Russia probe.

"Jeff Sessions takes the job, gets into the job, recuses himself, which frankly I think is very unfair to the president," Trump said, referring to himself. "How do you take a job and then recuse yourself? If he would have recused himself before the job, I would have said, 'Thanks, Jeff, but I'm not going to take you.' It's extremely unfair — and that's a mild word — to the president."

Trump and Sessions have had a contentious relationship since the attorney general decided to recuse himself. Sessions, who served as a top Trump campaign advisor, announced the decision in March 2017 after he failed to disclose multiple meetings with Russia's ambassador to the United States during the 2016 presidential race.

In the past year, Trump has publicly called his attorney general "beleaguered" and even referred to Sessions in February, behind the scenes, as "Mr. Magoo," a cartoon character who is elderly, near-sighted and bumbling, according to The Washington Post. Trump has also berated Sessions and called him an "idiot" to his face, according to The New York Times.

Despite the president's vocal disapproval of his professional conduct, Sessions has remained firm about his decision to recuse himself from the Russia inquiry and has continued to offer no public indication that he intends to step down, in spite of the president's denunciations and an apparent offer to resign, a move that allegedly came after the president called him an "idiot."

Former director of national intelligence on what motivated the Russian government to aid the Trump campaign.