Trump just met with the mother of a school shooting victim. She compared him to a "toddler"

Trump's meeting with the family members of the Santa Fe, Texas shooting victims did not go well at all 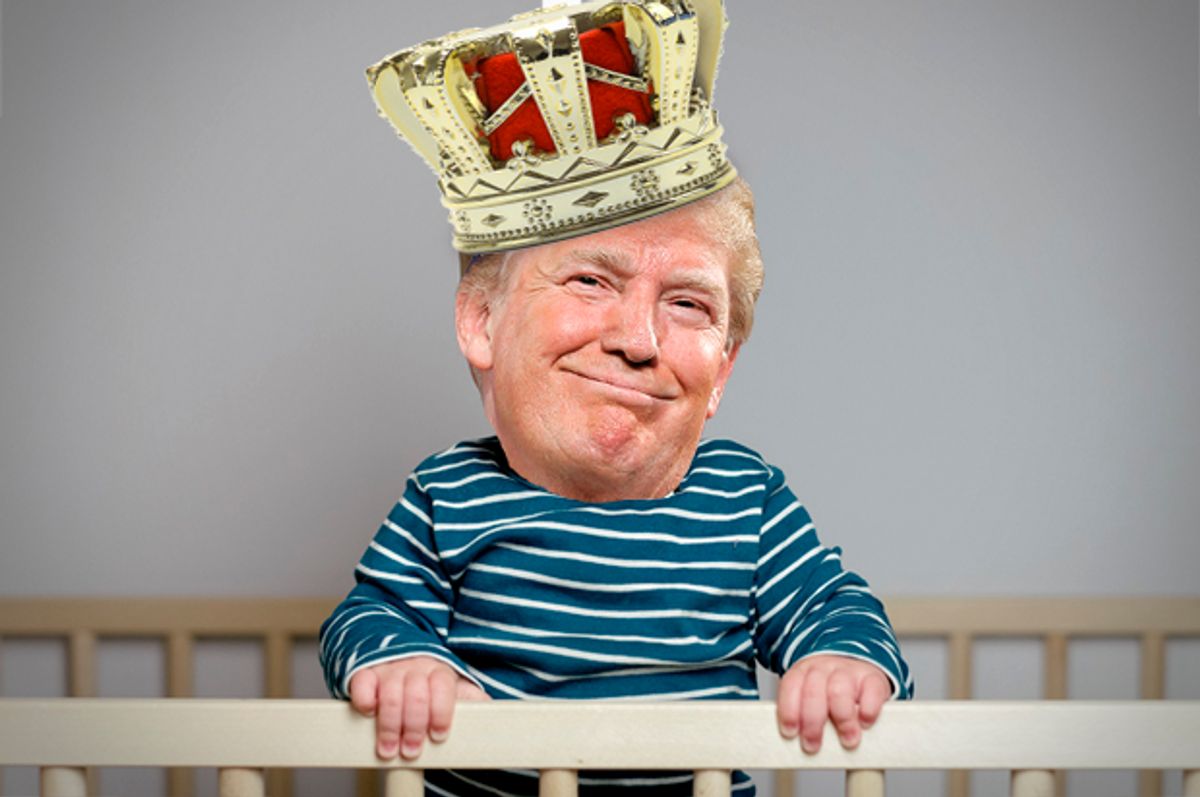 On Thursday President Donald Trump met with the families of the victims of the Santa Fe school shooting — and the meeting, by the accounts of at least one person who was there, did not go well.

Trump was compared to an obtuse baby by one of the people at the Santa Fe, Texas meeting, according to the Associated Press. Army veteran Rhonda Hard, whose 14-year-old daughter Kimberly Vaughan was killed during the Santa Fe High School shooting, told the Associated Press that Trump repeatedly used the word "wacky" to describe the shooter, 17-year-old Dimitrios Pagourtzis. In response to this, Hart claims that she told Trump, "Maybe if everyone had access to mental health care, we wouldn't be in the situation."

On another occasion, Hart suggested that veterans should be employed to guard school. Trump asked if she wanted to arm them and when she replied in the negative, Trump mentioned that schools should arm classroom teachers — a point that he repeatedly returned to during the conversation.

"It was like talking to a toddler," Hart told the Associated Press.

Deputy press secretary Hogan Gidley, on the other hand, characterized the meeting as very positive.

"I don’t want to get into the private meeting as it relates to the grieving families that experienced such a horrific tragedy," Gidley told reporters on Thursday. "But it was very impactful. It was a very emotional time. They’ve suffered a great loss and a great tragedy.  And out of respect for them and the grieving process, I’m not going to get into the details of the meeting."

Another person who attended the meeting also had a positive reaction to how Trump handled himself.

Pamela Stanich, mother of a 17-year-old son named Jared Black who was one of the eight students killed, wrote on Facebook after the meeting that Trump "met with us privately and showed sincerity, compassion, and concern on making our schools safer across the nation." She also claimed that "he spent time talking to the survivors and asking on what happened and what would have made a difference. Changes are coming for the good. Thank you Mr. Trump."

The meeting regarding the Santa Fe school shooting has been particularly important for Trump because of his past struggles with conveying empathy. During an event when he was supposed to comfort individuals connected to a school shooting in Parkland, Florida, Trump was photographed holding a piece of paper that included basic questions:

1. What would you most want me to know about your experience?

2. What can we do to help you feel safe?

3. Do you see something effective?

Trump also struggled when trying to comfort a Gold Star widow in February. When Trump placed a phone call to the widow in order to express his condolences, both she and a congresswoman who was in the car with her felt that his handling of the situation was very disrespectful. The widow, Myeshia Johnson, later claimed "the president said that he knew what he signed up for, but it hurts anyways... It made me cry because I was very angry at the tone of his voice and how he said it."

Johnson added, "He had my husband's report in front of him, and that's when he actually said La David. I heard him stumbling on trying to remember my husband's name. If my husband is out here fighting for our country and he risks his life for our country, why can't you remember his name?"

On another occasion, Trump received flak for his attitude toward Puerto Ricans suffering from Hurricane Maria. Despite already being criticized for acting too slowly in responding to the situation and devoting more resources to help Hurricane Harvey victims in Texas than Hurricane Maria victims in Puerto Rico, Trump was perceived as lacking empathy when he focused on himself during his visit to Puerto Rico. In one infamous gaffe, he also began casually tossing paper towels to Puerto Ricans who had gathered to discuss their problems, a move that was seen as both minimizing their suffering and also condescending.

Trump even made an insensitive comment before leaving to meet with the Santa Fe shooting group, telling reporters that "we're going to Dallas. We're going to Houston. And we're going to have a little fun today. Thank you very much."

The bottom line is that, while Trump's struggles with exhibiting empathy in social situations is a problem when it involves his need to act like a so-called "comforter in chief" to citizens who are suffering because of gun violence or natural disasters or other reasons, on a deeper level his empathy gap is notable because of the policies he pushes. While Trump has occasionally shown a willingness to buck the pro-gun movement and the NRA in this country, he has always been reined in by advisers who presumably explain to him that taking those stances would be politically disastrous. Whenever he makes that choice, he places his own political career over the lives of people who are being killed by gun violence.

It is an empathy gap that matters much more than saying the right things and being an inspiring leader to those enduring heartbreak and fear, although those responsibilities are also quite important. Unfortunately for America, Trump is hardly alone among politicians who suffer from this particular type of empathy gap. Until our political landscape starts caring about mass shooting victims when it shapes its policies, it is tragically likely that more events like the one Trump attended in Santa Fe will be necessary.

Sean Penn discusses the Parkland shooting survivors and his admiration for them.