The arrogant billionaire can certainly afford a social media manager. Instead, he keeps digging deeper holes 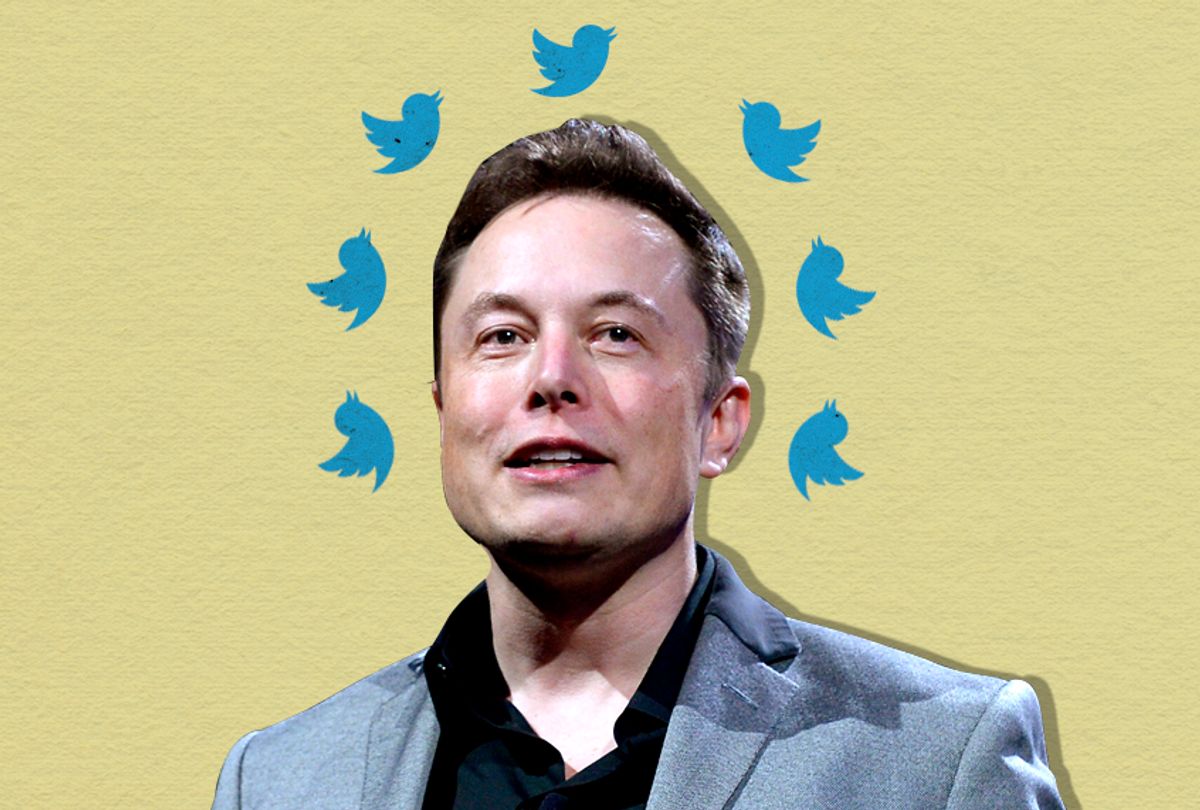 Just as Donald Trump built a brand around being successful, SpaceX and Tesla CEO Elon Musk has built a brand around being smart. As with the president, much of Musk's PR work is performed not by the braggadocious billionaire himself, but by his idolaters and by the media. To wit: Robert Downey Jr.'s depiction of polymathic CEO playboy Iron Man in the Marvel movies was loosely based on Musk, forever equating the two in many fans' minds. More recently, a cringeworthy name-drop in "Star Trek: Discovery" implied that he would be remembered far in the future for his prowess as an inventor. And any time someone criticizes him on Twitter, his foaming fanboys — yes, they're mostly men — run screaming to his defense, even attempting to hack his critics' online accounts.

But just as with Trump, there are signs that Musk's innovative brilliance is not quite what it seems. Musk's much-vaunted "hyperloop," a proposal for evacuated tube transit, looks suspiciously similar — in fact, near identical — to a comparable proposal floated by the RAND corporation in the 1970s. His Tesla brand is teetering on the verge of bankruptcy, and seems to have avoided going under merely by being able to coast on its founder's brand, which compels many investors to empty their pockets. Multiple companies he is involved with are "successful" by any measure only because they take advantage of government contracts, following a neoliberal pattern of privatization — suggesting his true "genius" might lie in founding companies that seem poised to take advantage of subsidies.

If there is a major hint that Musk's genius is not what it seems, take his communications style as Exhibit A. Again, like Trump (notice a pattern?), his public comms style hints that he has skin of gossamer.

On April Fool's Day, just as reports were circulating that many investors believed Tesla was on the "verge of bankruptcy," Musk took to Twitter to post several tweets mocking those who had scrutinized his company's shaky financials.

Tesla Goes Bankrupt Palo Alto, California, April 1, 2018 -- Despite intense efforts to raise money, including a last-ditch mass sale of Easter Eggs, we are sad to report that Tesla has gone completely and totally bankrupt. So bankrupt, you can't believe it.

There are many chapters of bankruptcy and, as critics so rightly pointed out, Tesla has them *all*, including Chapter 14 and a half (the worst one).

Elon was found passed out against a Tesla Model 3, surrounded by "Teslaquilla" bottles, the tracks of dried tears still visible on his cheeks.

This is not a forward-looking statement, because, obviously, what's the point?

The final tweet was accompanied by an image of Musk, eyes closed, lying on a Tesla, holding a cardboard sign reading "bankwupt!" in Sharpie.

Far from being merely harmless, Musk's April Fool's tweets rankled many. The Washington Post ran a whole article on it, which included these responses from the commentariat:

“It was not funny, because it’s not a joking matter,” said Gene Munster, who leads research for the venture-capital firm Loup Ventures. “It wasn't appropriate, because they had probably their worst week since the company was started, and it’s just not the week to be making jokes.”

“It’s perfectly appropriate to try to inject levity and a kind of personality into your communications, but not when you’re under scrutiny as a result of a [recent] death [of a driver who was using Tesla's semi-autonomous Autopilot system],” said Paul Argenti, a professor at Dartmouth College's Tuck School of Business. “If I were a shareholder, I wouldn't find that funny.”

Victoria Reitano, a digital marketing and social media expert who has experience managing high-profile social media accounts, balked at Musk's social media habits. "As a thought leader you have a responsibility to your audience," Reitano told Salon. She added that Musk has a greater responsibility to the public than a layperson might given his role as the steward of a publicly traded company.

As a billionaire, Musk can certainly afford to hire social media managers. So why doesn't he? Does his ego preclude him from believing he isn't an expert on communications? Is anyone in his inner sanctum raising alarm bells?

Specifically, last month, Elon Musk's Twitter tete-a-tete with the cartoonist of the popular Existential Comics series raised eyebrows, and provided a blueprint for everything a CEO shouldn't do online.

The fracas began with a tweet from Existential Comics' Twitter account, run by cartoonist Corey Mohler. "The funniest thing about libertarians worshipping [Elon Musk] is that he's basically the villain from 'Atlas Shrugged.' He makes all his money from government subsidies and contracts, and by wildly exaggerating production to pump up stock prices," Existential Comics tweeted.

Musk is a public figure with a verified Twitter account and almost 22 million followers, who likely gets thousands of people tweeting at him a day; Existential Comics' Twitter account is popular yet admittedly niche, and has 205,000 followers, or about 1 percent the follower count of Musk. Understandably, Mohler did not expect Musk to notice his tweet, nor to respond to a cartoon's Twitter page.

"Our giant auto [company] competitors have much greater access to incentives than Tesla, which means Tesla has prospered in spite of [government] subsidies, not because of them. Tesla [market] cap has *risen* over time as EV [Electric Vehicle] incentives declined. How strange …" Musk replied.

Musk perhaps underestimated Mohler's knowledge of Tesla's inner business workings. "The government invested more money in Telsa & SpaceX than you, by far. They have no voting shares because you sell off overinflated stocks to keep the public from having a say in your run your publicly funded companies. Subsidies are a drop in the bucket," Mohler riposted, tweeting a link to an LA Times article, headlined "Elon Musk's growing empire is fueled by $4.9 billion in government subsidies."

"That article was pushed as propaganda to counter IMF study showing fossil fuel subsidies to be $5 trillion/year," Musk responded. "Even if $4.9B was true, combined market cap of Tesla & SpaceX is $80B. Where did the other $75B come from? Ass [Hat] …"

It went on. Mohler: "Jesus dude, market cap isn't what was invested. You put in like $70 million of the money you got from ripping people off with PayPal. The government put in half a billion. If you allowed that money to be vested into shares, they would OWN part of that market cap."

Musk's ripostes devolved. "No use arguing with chimp. You’re blocked," he concluded.

"I was quite shocked to see the notification on my phone that he was replying," Mohler told Salon by email. "I wasn't really tagging him to try to provoke him into an argument or anything, just because I didn't think it was realistic. Now I realize that he does this kind of thing quite a bit, so maybe I should have known."

"It's incredible that he is so mad online that he was replying to me literally in the middle of a rocket launch, because I said he wasn't as cool as John Galt or whatever," he added. "I think he's surrounded himself with people who give him cult-like praise for so long, he can't take even the slightest criticism without losing it."

I asked Reitano what she made of Musk's schoolyard insults. "It is bad practice" for social media, she noted. "However, he got a lot of press out of this." She said she would not have advised him to behave that way, had she run his accounts.

While Musk may have gotten a bit of press from the exchange, Existential Comics got a lot. Mohler says their argument and his tweet recap had 1.5 million Twitter impressions, and he gained 5,000 followers. But beyond merely building Existential Comics' profile, the ordeal seems to have helped bring attention to the prominent criticisms of Musk: that he is not as good a businessman as he might seem; that he is not really a "public intellectual" as some make him out to be; that he likely helped contribute to fraud at PayPal; and that much of is wealth comes from government subsidies and hype, rather than any business acumen.

Mohler's quip about "ripping people off with PayPal," which Musk did not respond to directly, alludes to an ongoing incident at the digital payment company back in the late 1990s and early 2000s, a period during which Musk was CEO. At the time, PayPal froze the accounts of thousands of PayPal users with small account balances, then did not respond to their inquiries to unfreeze their assets. (As PayPal is not a bank, they weren't bound by finance industry rules regarding paying out customers' balances).

The questionable timing of the account freezes — they occurred around the time that eBay was interested in acquiring PayPal — along with the fact that PayPal seems to have picked on customers with account balances that were small enough to make it almost not worth customers' time to fight back, hints, to some, that the Musk-led company was defrauding customers to make their own balance sheets look better. Many consumers joined a class-action suit.

It is unknown how and if Musk was involved in this purported scam: He was booted as CEO of PayPal in October 2000. When eBay purchased PayPal in 2002, Musk, who was still its largest shareholder, pocketed $165 million, meaning that he profited from the company's dodgy business practices regardless.

As for the widespread fanboy adulation of Musk, the fracas seems to have punctured a hole in that image, too. "His replies were a bit incoherent, and seem to miss the point," Mohler told Salon. "He's pretty savvy at self-promotion, though, and pumping up his stock prices wildly beyond their value based on how much money his companies are actually making, and that's the most desired skill you can have in Silicon Valley, so in that sense I guess he is a Silicon Valley genius."

"People like him don't seem to understand that you are only going to help someone like me by replying, and draw more attention to it," Mohler told Salon. "It's especially dangerous to engage with a comedian too, because my whole business is making jokes on Twitter. I'm actually a little disappointed I hadn't considered the possibility of him replying, or I would have had much better tweets lined up."