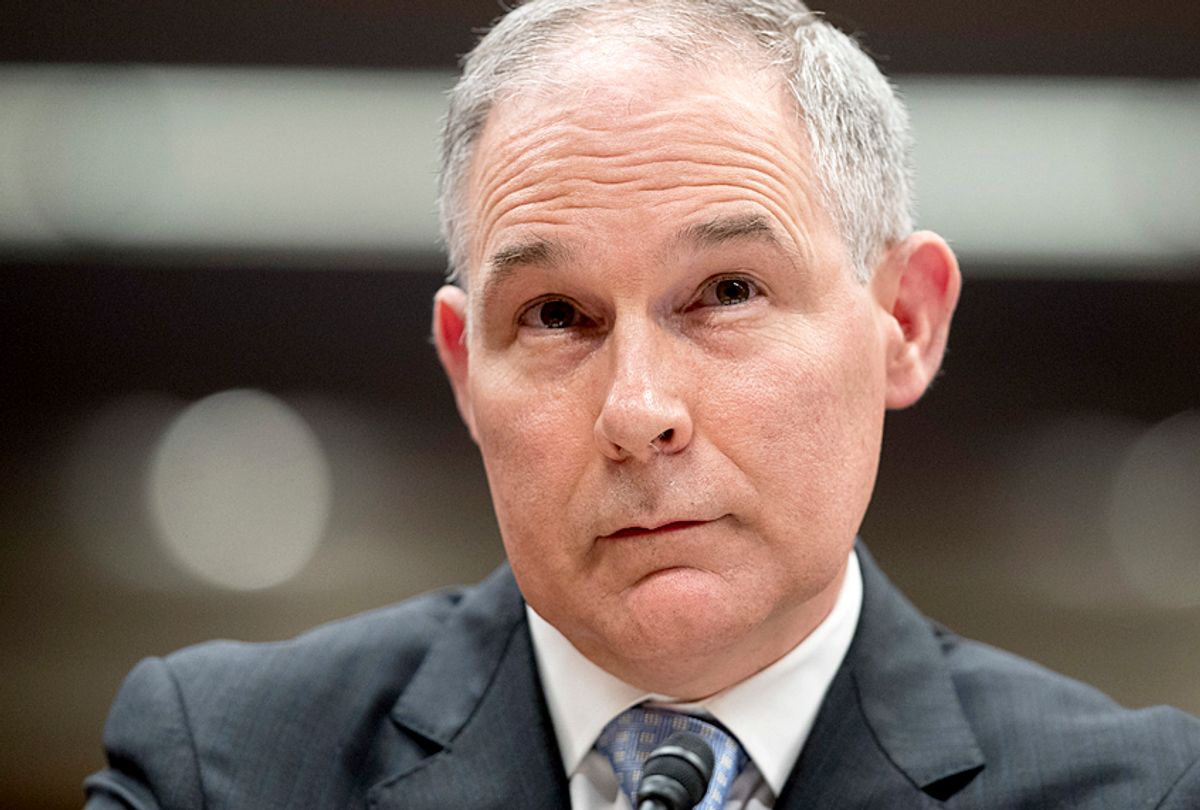 An aide to embattled EPA Administrator Scott Pruitt was reportedly asked to acquire an "old mattress" from the Trump International Hotel.

The aide, Millan Hupp, served as Pruitt's director of scheduling and advance, The Washington Post reports.

In testimony with Democrats on the House Oversight Committee released Monday, Hupp said she performed an array of personal tasks for the administrator, including booking travel, visiting rental properties and trying to purchase a used hotel mattress.

According to a partial interview transcript released Monday by House Democrats, Hupp said she recalls conversations with Pruitt about "the possibility of securing an old mattress from the Trump Hotel." She reached out to the managing director at the Trump International Hotel in Washington via email in September 2017.

"If Ms. Hupp's statements to the Committee are accurate, Administrator Pruitt crossed a very clear line and must be held accountable," wrote Reps. Elijah Cummings, D-Md., and Gerry Connolly, D-Va., the top two Democrats on the committee.

Pruitt did not obtain the mattress, and Hupp told committee staff that she was not involved in furnishing Pruitt's residence beyond the mattress request.

It is not entirely clear what the former Oklahoma politician, who has already come under intense scrutiny for spending taxpayer dollars on first-class travel, enlisting round-the-clock security detail and spending $43,000 for a private phone booth, had planned to do with the used mattress.

The new details of the tasks Pruitt allegedly assigned his staff were revealed during an investigation into the administrator that is being conducted by the House Oversight and Government Reform Committee.

"We are working diligently with Chairman Gowdy and are in full cooperation in providing the Committee with the necessary documents, travel vouchers, receipts and witnesses to his inquiries," said EPA spokesman Jahan Wilcox, per CNN.

House Oversight Committee spokeswoman Amanda Gonzalez said in a statement that the panel "has conducted several transcribed interviews and obtained 2,350 pages of documents as part of our investigation into mismanagement and spending at the EPA."

"This month, the Committee will interview additional witnesses and receive additional document productions," she added, according to the network.

Gonzalez criticized Democrats for including portions of Hupp's interview in their letter.

"Selectively releasing portions of witness interview transcripts damages the credibility of our investigation and discourages future witnesses from coming forward," Gonzalez said in a statement. "The Committee will continue conducting a serious, fact-driven investigation, and therefore will wait until the conclusion of our investigation to release our findings."

The embattled EPA chief has managed to hold onto his job despite the ethical entanglements that have colored his time in office, likely because he has rolled back several environmental regulations enacted by former President Barack Obama and lifted policy decisions that hurt fossil fuel and mining interests, with whom President Donald Trump's administration enjoys a cozy relationship.

In April, Trump tweeted that Pruitt "is doing a great job but is TOTALLY under siege" by the news media.

It was revealed just last week that Pruitt spent more than $1,500 for a dozen custom pens bearing his signature.

When asked about the controversy Monday, EPA spokesman Jahan Wilcox told The Washington Post in an email, "We are working diligently with Chairman Gowdy and are in full cooperation in providing the Committee with the necessary documents, travel vouchers, receipts and witnesses to his inquiries."