Supreme Court dodges the big issue in Masterpiece Cakeshop ruling: Is there a loophole for bigots?

By refusing to decide whether "religious liberty" justifies discrimination, court ensures the fight will continue 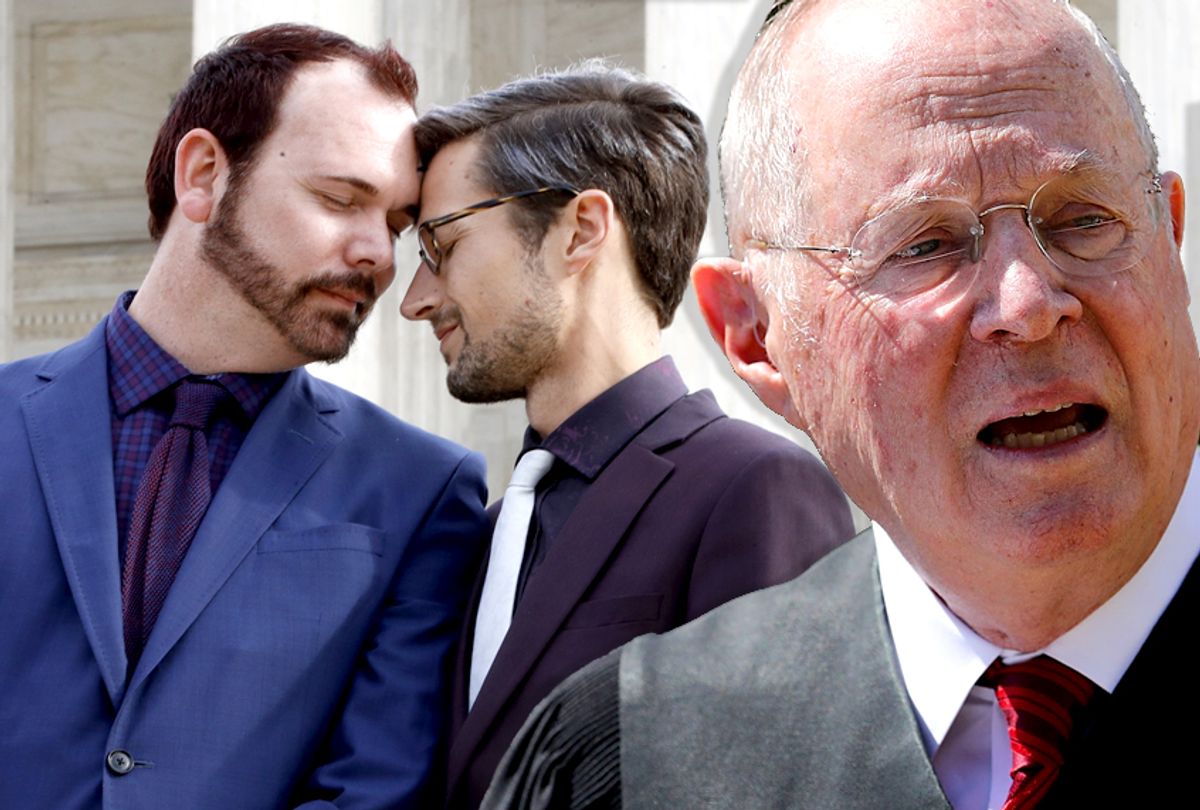 On Monday morning, the Supreme Court issued its ruling on Masterpiece Cakeshop v. Colorado Civil Rights Commission, a widely anticipated decision that most observers felt would determine the fate of the religious right's efforts to use "free speech" and "religious freedom" arguments as a backdoor method to legalize discrimination against LGBT people. But while headlines are declaring this 7-2 decision as a "victory" for the baker accused of discrimination for refusing to sell a wedding cake to a same-sex couple in Colorado, that's not quite clear. When it comes to the larger issues at stake, it's fair to say the high court punted, refusing to resolve the question of whether or not businesses can refuse service to LGBT customers on the basis of religious objections.

Justice Anthony Kennedy, who wrote the majority decision, did this by focusing narrowly on the language the Colorado Civil Rights commissioners used in ruling against Jack Phillips, the owner of Masterpiece Cakeshop, when he refused to supply a cake for the wedding of Charlie Craig and Dave Mullins.

"The Court’s precedents make clear that the baker, in his capacity as the owner of a business serving the public, might have his right to the free exercise of religion limited by generally applicable laws," Kennedy writes. But such a decision "needed to be determined in an adjudication in which religious hostility on the part of the State itself would not be a factor." That requirement, Kennedy wrote, "was not met here."

As evidence that the commissioners were hostile rather than neutral regarding Phillips' religious beliefs, Kennedy quotes one commissioner who argued that "religion has been used to justify all kinds of discrimination throughout history, whether it be slavery, whether it be the holocaust" and also suggested that "one of the most despicable pieces of rhetoric that people can use" is "to use their religion to hurt others."

Liberal justices Elena Kagan and Stephen Breyer joined the majority, along with Kennedy and the four most conservative justices. In her concurring opinion, Kagan argued, "Colorado can treat a baker who discriminates based on sexual orientation differently from a baker who does not discriminate on that or any other prohibited ground. But only, as the Court rightly says, if the State’s decisions are not infected by religious hostility or bias."

While a number of liberal activists expressed anger and frustration at the decision, several legal experts agreed with the assessment that the decision was a punt:

Still, there are good reasons to be disappointed with this decision. By refusing to rule more broadly on this issue, the justices failed to put a stop to the religious right's new campaign to create a massive "religious freedom" loophole that would effectively legalize anti-LGBT discrimination.

“The Masterpiece case is part of a larger effort and larger plan by advocates for religious freedom and against LGBT rights and against women’s rights -- to use religious exemptions to undermine equality norms that they don’t like," explained James Esseks, director of the ACLU Lesbian Gay Bisexual Transgender & HIV Project, in a press call held before the decision came out. "This is not about, 'Hey, if we can just find a little space here, everyone can get along.' This is an effort to undermine civil rights protections."

“The Court today has offered dangerous encouragement to those who would deny civil rights to LGBT people and people living with HIV," Lambda Legal CEO Rachel Tiven said in an emailed statement. "Today’s decision should have been a firm, direct affirmance of longstanding equality law. Instead, the Supreme Court has become an accomplice in the right’s strategy to hollow out one of its finest achievements, the right to equal marriage, and create what Justice Ginsburg memorably termed ‘skim milk marriages.’"

Under the circumstances, it's tempting to believe or hope that this issue will just go away on its own, and discrimination against same-sex couples will wane as social disapproval of homophobia becomes the norm. But as Esseks notes, there's now a well-funded effort to generate lawsuits like this, backed by groups like the Alliance Defending Freedom, which supported Phillips in this case. Right-wing lawyers and legal scholars hope to open the door to many more forms of discrimination in the name of religion. So there's every reason to believe that this fight is not going away any time soon.

Esseks argued that the harm stemming from this battle extends well beyond the specific LGBT people who are directly discriminated against.

“We go through our lives, making judgments every day about, 'Is it safe to come out to people?'" he explained. For many LGBT people, this may lead to a sense that they must second-guess such decisions "and have to navigate this question again and again and again and be more fearful about being turned away."

By kicking the can down the road and failing to rule outright against those who claim a religious right to discriminate, the court is extending that anxiety. It may even contribute to it, as there is arguably even more reason now for Christian conservatives to deliberately discriminate against LGBT people in hopes of creating another test case to bring before the courts.

If Kennedy wanted this whole issue to go away, there was a way to do that: A forceful decision from the highest court in the land declaring flatly that religious liberty does not exempt anyone from general civil rights laws. Failure to do so only guarantees that this struggle will continue for years to come.

How will the Masterpiece Cakeshop decision shape the future of LGBT rights?