"I'll give whatever support is needed to my friends," the NBA star said of President Donald Trump and Kim Jong Un 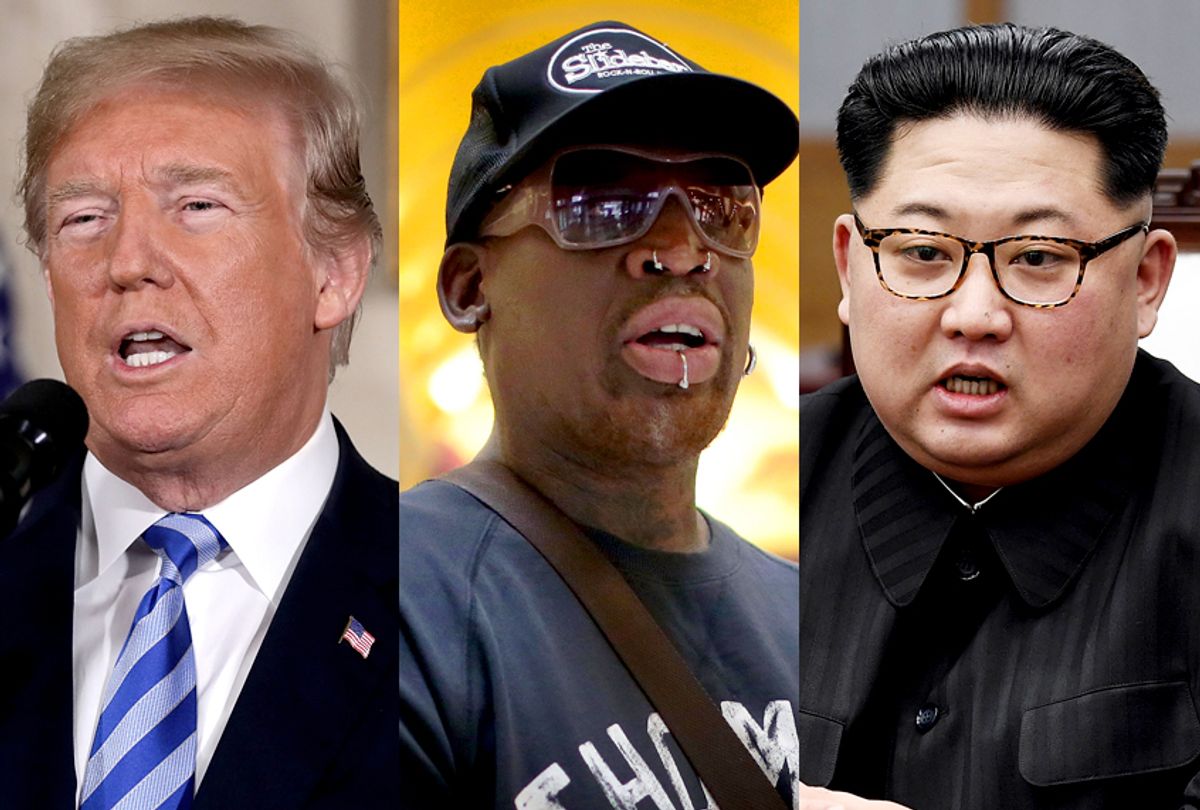 Dennis Rodman is here to support President Donald Trump and North Korea leader Kim Jong Un in anyway he can, the former NBC star wrote Friday in a tweet announcing that he would be traveling to Singapore "for the historical summit" between the two heads of state.

In a tweet that was quickly deleted but then reposted, the athlete said: "Thanks to my loyal sponsors from @potcoin and my team at @Prince_Mrketing , I will be flying to Singapore for the historical Summit. I'll give whatever support is needed to my friends, @realDonaldTrump and Marshall Kim Jong Un."

Despite the accompanying image to Rodman's tweet – a composite photo of Trump, Kim and the basketball player including the words "UNITE" and the flags of both nations – he has not been formally invited to the summit.

"White House officials have repeatedly said that Rodman would play no official role in the diplomatic negotiations, and Mr. Trump said Thursday that the basketball legend had not been invited to the June 12 summit," CBS News reported.

But Rodman does not seem deterred, following up his "unite" tweet with a photo of himself and the president.

"To all Americans and the rest of the world I’m honored to call @POTUS a friend," he wrote. "He’s one of the best negotiators of all time and I’m looking forward to him adding to his historic success at the Singapore Summit."

And Rodman's agent, Darren Prince, confirmed the trip to CNN. "He is willing to offer his support for his friends, President Trump and Marshall Kim Jong Un," Prince said.
Rodman has traveled to North Korea several times since 2013. He has fervently defended the controversial leader, saying "I love my friend– this is my friend," during an interview on CNN in 2014. He also once sang happy birthday to Kim Jong Un before a basketball game.
Most recently, PotCoin, the cryptocurrency company for the marijuana industry, sponsored a trip he took to North Korea in 2017.

"PotCoin's interest in North Korea, an isolated country, was not immediately known and none was provided in a press release from the company announcing Rodman's trip," my colleague Taylor Link wrote at the time of the trip. "Indeed, the exact nature of marijuana laws and marijuana cultivation in the country are hazy due to a lack of credible literature on the subject."

As part of the press release, Prince said, "Anyone who knows Dennis knows he’s trying to use his relationship to open the line of communication and send a message of peace and understanding."
Rodman also has connections to the president. He was a contestant on Trump's "Celebrity Apprentice" in 2013. And, while Rodman is an infrequent tweeter, one of his more recent re-tweets is one from Trump in 2014, who accused the basketball legend of being "drunk or on drugs" for saying Trump wanted to travel with Rodman to North Korea. "Glad I fired him on Apprentice!" Trump added.

Dennis Rodman was either drunk or on drugs (delusional) when he said I wanted to go to North Korea with him. Glad I fired him on Apprentice!

Perhaps the re-tweet was a way for Rodman to demonstrate how full circle this moment is for him. On an individual level, Rodman has clearly been fascinated by North Korea and engaged in informal diplomacy for quite some time. And, in many ways, he has received significant flack for it.
But, now that Trump is onboard – and the summit next week represents the first of its kind between a leader of North Korea and a sitting U.S. president – does Rodman wonder if he will be seen as an innovator?
Still, Trump and those around him maintain that Rodman will not be involved. Rodman is "great on the court but negotiations should best be left to those who are good at it," White House Deputy Press Secretary Hogan Gidley told Fox News on Thursday. "President Donald Trump is the best. So we expect he and Kim Jong Un to have an amazing conversation without Dennis Rodman in tow."