Trump insults U.S. allies ahead of G7 summit, will rush off to snuggle with Kim Jong-un in Singapore 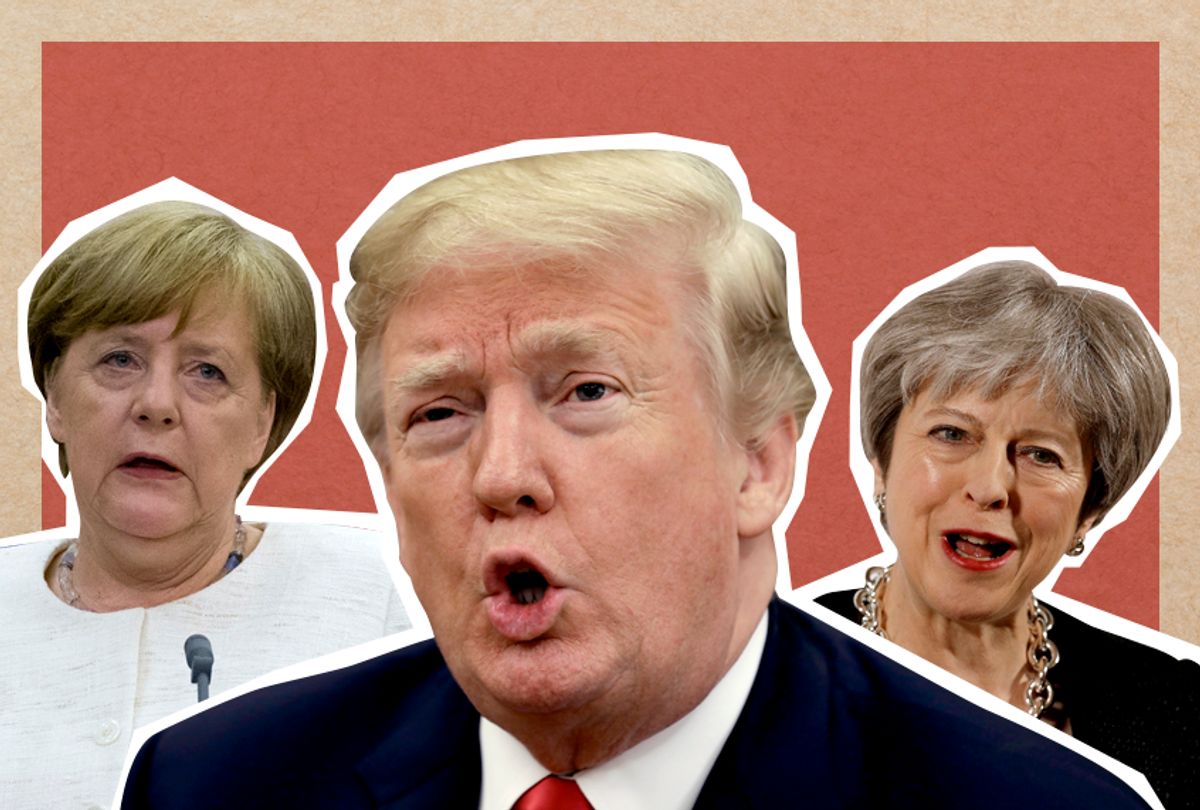 Gird yourselves. Starting Friday, President Donald Trump is on an international whirlwind trip, starting in Canada for the G7 summit meeting and then, barring someone screwing the pooch (which is entirely possible), he's off to Singapore for the big summit with North Korean leader Kim Jong-un. It's inevitable that Trump will embarrass himself and the country -- and considering the stakes this time, embarrassment could be the least of it. Take a deep breath and hope for the best.

On Thursday Trump had a meeting at the White House with the prime minister of Japan, Shinzo Abe, and they held a photo op and press conference afterwards. Asked about his preparation for the Singapore summit, Trump said:

This reflects Trump's overall approach to the job of president. Recall that during the campaign he said that he doesn't believe experts know what they are talking about and he doesn't need to prepare or learn anything new because he reaches the right decisions “with very little knowledge other than the knowledge I [already] have, plus the words ‘common sense.'” (He also  mentioned his business acumen, which is honestly not reassuring.)

According to Politico, national security adviser John Bolton has yet to call a Cabinet-level meeting to discuss the summit, calling it  "a striking break from past practice that suggests the Trump White House is largely improvising its approach to the unprecedented nuclear talks." The story suggests that  Bolton may be in the doghouse over the "Libya model" comment that caused so much trouble, particularly since Vice President Mike Pence and Trump himself embarrassed themselves by repeating it, obviously under Bolton's tutelage. The only person who is talking to Trump about North Korea is Secretary of State Mike Pompeo, and nobody's sure how much of that is happening.

Basically, the president will be flying blind on an issue about which he knows little and dealing with a world leader who skillfully assessed the president's monstrous ego and ratcheted up the crisis so he could flatter this unschooled president with a "de-escalation" and get him to the bargaining table. Kim probably never dreamed that Trump would jump at the chance to meet him on the world stage as an equal but that's what happened. North Korea's leader is on a roll:

Any day that Kim and Trump aren't threatening the world with fire and fury is a good day. So if Trump manages to get out of this with a bad deal that nonetheless delays a crisis, that's much better than the alternative. The question, of course, is whether his "attitude" will end up making things worse. (He should at least tell his giddy lawyer, Rudy Giuliani, to shut up about how Trump made Kim crawl on his hands and knees begging to restart the summit. That's not productive, to say the least.)

Trump seems to be excited about meeting with the North Korean dictator. For all his lack of preparation on the substance of the talks, he's apparently been obsessed about the pageantry, which is more important to him than any agreement. In his mind, if the pictures on TV have him looking like a hero he's a winner regardless of the substance.

On the flip side, this G7 meeting in Canada is shaping up to be an epic goat rodeo.

Naturally, he'll be skipping the scheduled sessions on climate change, clean energy and oceans. Why bother?

They'll say Trump had to rush off to win his Nobel Peace Prize, but the real reason is that he doesn't want to be face to face with America's allies who have had it up to here with his disrespectful treatment and insistence on starting an unnecessary trade war. According to the Washington Post, Trump is angry with Canadian Prime Minister Justin Trudeau for publicly chastising him and is seeking new ways to punish Canada because it had the audacity to be upset that he called our northern neighbor a national security threat. Apparently he expects all foreign leaders to cry uncle the minute he slaps them. He's also been griping about German Chancellor Angela Merkel because she disagrees with him on many issues -- she also clearly thinks he's a dolt and can't hide it well -- and he doesn't like British Prime Minister Teresa May either, whom he finds too "politically correct."

Obviously, as the Guardian reported yesterday, the real problem is this:

Emmanuel Macron has called on other members of the G7 to stand up to Donald Trump’s trade policies in the face of what he described as the threat of a new US “hegemony.”

The French president was speaking alongside the Canadian prime minister, Justin Trudeau, who is hosting the G7 summit in Quebec amid sharp disagreements between the US president and the six other leaders of industrialized liberal democracies over trade, climate change and the nuclear deal with Iran.

Macron called on other G7 leaders not to water down a joint communique at the end of the summit, at the expense of shared values, simply in an effort to win Trump’s signature, warning that a “G6 plus one” outcome was possible.

That's a shocking thing to read. Even during the major upheavals within the North Atlantic alliance leading up to the Iraq war, there was nothing like this.

Apparently, Trump was laboring under the impression that he could order the whole world around and it would do whatever he said because of his big beautiful hands. It turns out that even his BFF Macron won't roll over just because Trump tells him to.

The farmers he's allegedly defending aren't stupid. They know a lot more about trade than he does and they understand perfectly well that tariffs are never a one-way street.

They also know that other countries see that playing chess with Trump is like playing with a three-year-old. He gets an intent look on his face and appears to be thinking through his strategy, but really he's just moving pieces randomly all over the board. We will all have to hope that somehow he doesn't have a tantrum and upend the whole board. He's playing with millions of people's lives.