Here is what film critics are saying about “Ocean's 8"

"Stealing a diamond necklace is bad, but wasting an opportunity like this is unforgivable," one critic writes 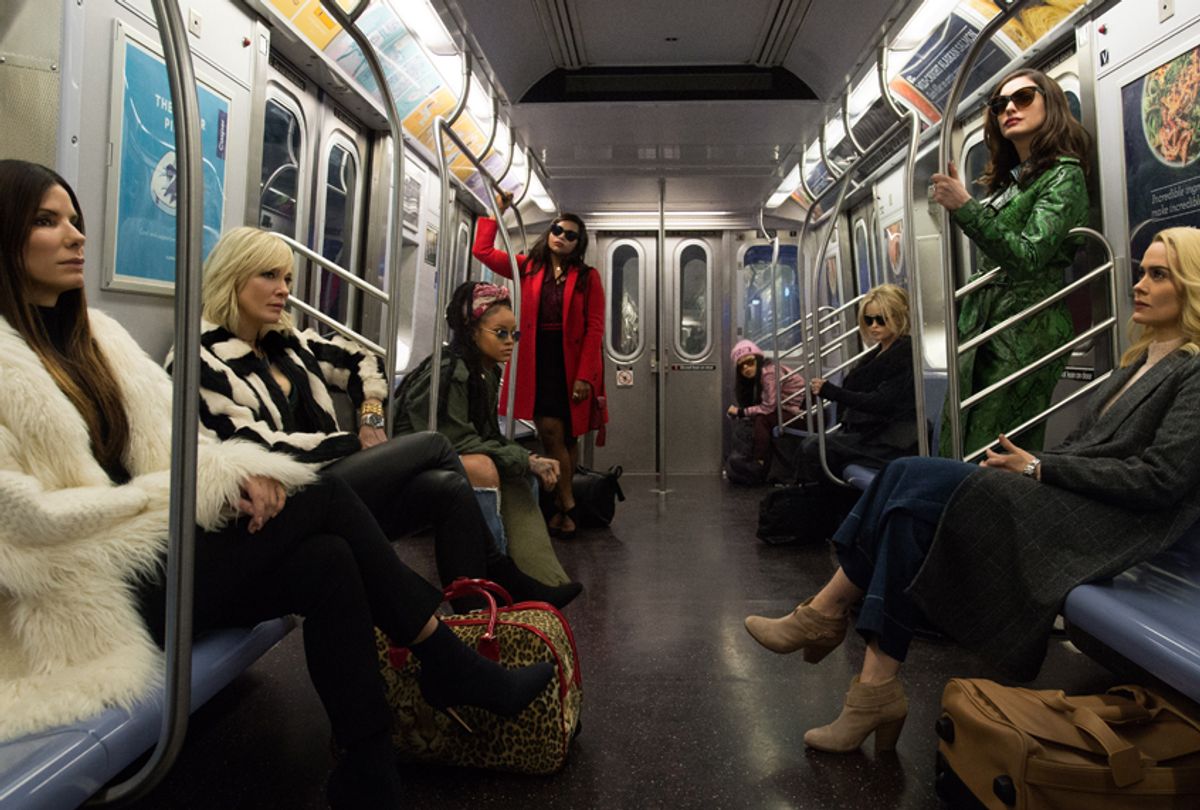 If the "Ocean's" franchise was not enticing enough to get audiences through the door, surely the star-studded line-up of the all-female update is.

The cast of "Ocean's 8," in theaters this weekend, includes Sandra Bullock, Cate Blanchett, Anne Hathaway, Mindy Kaling, Sarah Paulson, Helena Bonham Carter, Rihanna and rapper Awkwafina, who gear up for the theft of a $150 million diamond necklace at the Met Gala.

And, according to the reviews, the film's stars soar. Any one of of these actors would be an exciting prospect for an upcoming film, and together they are a dream.

Beyond the obvious star power of the group, some critics question whether, in the age of #MeToo, there is something truly remarkable or groundbreaking in a gender-flipped remake.

"'Ocean’s 8,' a woman-centric take on Soderbergh’s love for making crime look cool, doesn’t have much in the way of original plotting," writes Kate Erbland for Indiewire, "instead rooting its purpose in a premise that should no longer be considered as revolutionary as it is — building an entire film around unique female characters."

While Variety's Owen Gliberman believes the standard should be that there is nothing "innovative or audacious" about the film's basis, this is the thinking of "a better world" – one we do not yet inhabit.

Overall, while critics were impressed with the film's on-screen talent, they were much more disappointed with the creativity of those behind the scenes. Steven Soderberg, who directed "Ocean's 11," "12" and "13," retreats in "Ocean's 8" to a producer's credit, and reviewers argue that the film franchise suffers with Gary Ross ("The Hunger Games," Seabiscuit") at the helm.

Here is what film critics are saying about "Ocean's 8":

Yes, the plot has more holes than a wheel of swiss cheese and director Gary Ross ("The Hunger Games") lets the script he wrote with Olivia Milch go slack in its mid-section, but odds are you won't give a fuck. "Ocean's 8" is a heist caper that looks gorgeous, keeps the twists coming and bounces along on a comic rhythm that's impossible to resist. What more do you want in summer escapism?

The depth and breadth of these characters is one of the film's greatest assets, from Cate Blanchett as Debbie's best friend Lou, a booze-shorting badass who appears to take her style cues from early Keith Richards, to Anne Hathaway as the gloriously vapid Daphne, along with star turns from Rihanna as a whipsmart hacker and Awkwafina as a fast-handed grifter. But this volume of bubbly personalities also holds back the film as a whole.

We want to spend time with these characters, and when the film switches into heist mode, "Ocean's 8" loses sight of the women who drive it, opting to focus on a heist that's fun, but not nearly as fun as watching the characters prepare for it.

On the scale of Rube Goldberg ingenuity, it’s not the most dizzying or outrageous heist you’ve ever seen; it doesn’t scale the rafters of high-wire insanity the way the one in "Ocean’s Eleven" did. (Then again, what has?) But it’s clever enough to get by. It leaves you with that classic head-spinning "Ocean’s" feeling of "Yep, I bought what I just saw," even when your head stops spinning enough to tell you that what you just saw is a pleasantly preposterous mission impossible.

Plot-wise, the movie lacks for any of the grander sleights of hand and logical leaps of the other "Ocean’s" movies. Mind you, very little in those films bears the weight of scrutiny, but at least they provided pleasingly intricate knots to pick through. "Ocean’s 8," written by Ross and Olivia Milch, goes a simpler route, paring down the mechanics of its heist and fixing problems quickly and easily. Something about the film feels less thorough, less nourishing, as if it doesn’t trust its audience to contend with something more complicated. Or it could just be that Ross and Milch have written a weaker script than what’s come before. Either way, it feels dismayingly pointed that this "Ocean’s" movie, of all the "Ocean’s" movies, is the one that gets the more basic treatment.

The deck is stacked so incredibly in "8’s" favor that this feels like an algorithmic improbability. Illuminated by an extremely hype cast — Bullock, Cate Blanchett, Rihanna and ascendant rapper Awkwafina, among a few — it’s been primed to represent a cross section of the possibilities of female glamour in 2018. The film has intrinsically been proposed as more than just a fun summer heist movie; it’s a symbolic balm for all the ills of a male-dominated Hollywood that have dominated the news for nearly a year. The idea that this diverse group of women would all have a reason to want to rip off the system feels like some kind of elaborate wish-fulfillment fan fiction. But in its actual form, it doesn’t feel like much more than a thrown bone.

At some point between the first and second hours, though, you may find yourself wishing that Mr. Soderbergh — a producer here — had also directed "Ocean’s 8." Its cast aside, the movie sounds and narratively unwinds like the previous installments, but without the same easy snap or visual allure. As a director, Mr. Soderbergh doesn’t throw the camera around, but one of pleasures of his movies is a commitment to beauty as a cinematic end. Here, the actresses carry that burden.

What Soderbergh, who serves here as producer, brought to his "Ocean's'" films — even the busy, bloated sequels — was a jazzy energy, an effortless light touch that seems beyond the reach of Ross. "Ocean's 8" tries to inject that verve with an eclectic mix of music to supplement Daniel Pemberton's score, from Charles Aznavour to Amy Winehouse, James Last to The Notorious B.I.G. But it lacks punch, even if the complicated plotting is sound enough, the gadgetry impressive and the visual trappings sleek. You just start to feel starved for a movie with conflict, suspense and a little heart, rather than a repackaged version of a formula already flogged to death.

The lifeless direction, the unrefined script, the underwhelming cameos, the distinct lack of fizz – there’s a slapdash nature to the assembly of "Ocean’s 8" that makes it feel like the result of a rushed, often careless process. It’s made watchable thanks to the cast but star power alone cannot mask creative inadequacy. Stealing a diamond necklace is bad but wasting an opportunity like this is unforgivable.

Fashion mavens have lots to admire with exquisite costumes (it is the Met Gala, after all) and an Anna Wintour cameo. People-watchers can pick out various real-life celebrities who show up. And, for everyone across the board, Bullock and Co. are a pack of devious treasures who can ransack our shindig anytime.

"Ocean’s 8" has something to prove, and that determination is both its strength and its limitation. It works hard, stays on point, delivers a few nifty surprises and sometimes rises to a thrilling pitch of excitement — at least, before the story peters out in its belabored third act. What the movie refuses to do is dazzle, or resonate or overstay its welcome, which is another way of saying it doesn’t really linger. As "8’s" go, it could stand to be a little crazier.