Dick’s Sporting Goods proved that corporations can lead on gun control. Is that a good thing? 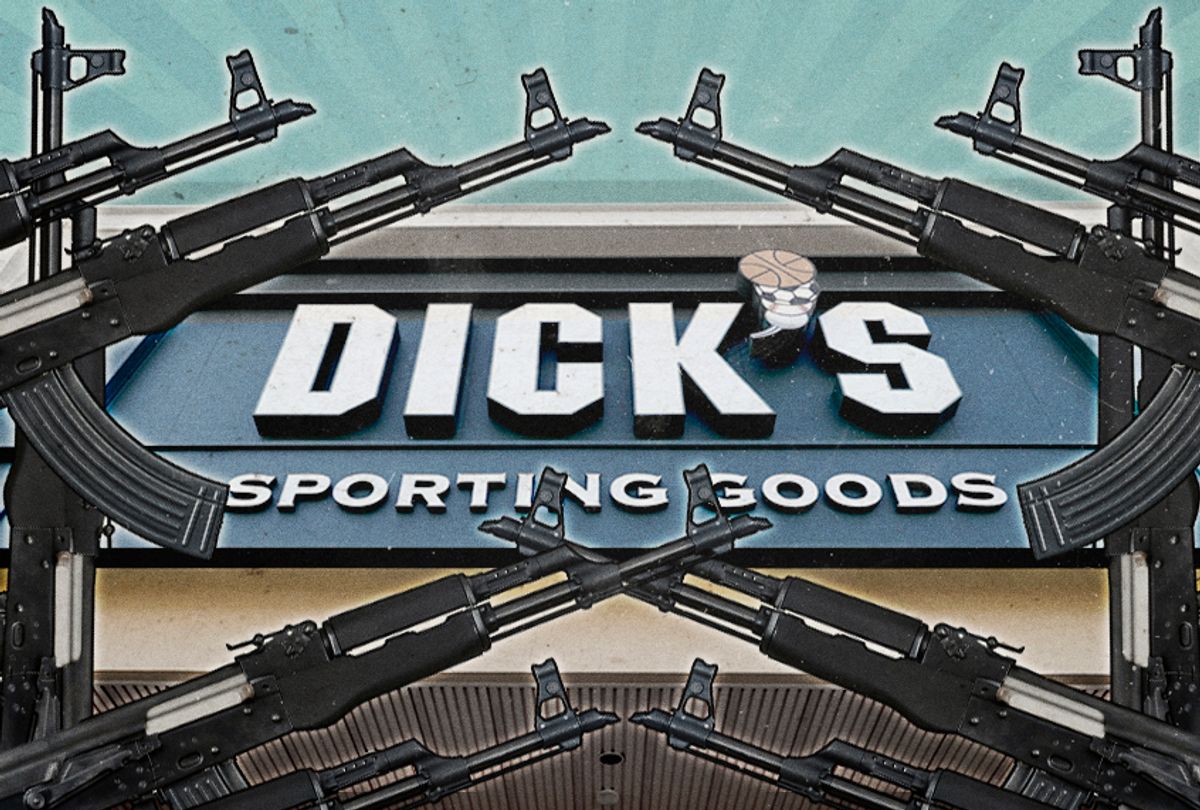 In the wake of the February shooting at Marjory Stoneman Douglas High School in Parkland, Florida, surviving students and parents of the deceased banded together and adopted a determined mantra: “This time must be different.”

The urgency, organization and indignation of the Parkland students and parents indeed made the aftermath of that shooting feel different. “There just seems to be a lot more determination to get something done — to finally get something done,” Rep. Mike Thompson (D-Calif.) told The Hill shortly after the shooting. “Maybe it’s the organic nature, I’m not sure, but it just feels different.” In March, the New Yorker’s Margaret Talbot was one in a chorus of writers who cautiously echoed the sentiment: “This moment does feel different.”

But now, with a few months’ remove from the massacre — enough time for a number of other school shootings to occur — the feeling that change was imminent seems to have been nothing more than wishful thinking. Though a handful of states have passed nominal gun control measures (Connecticut banned bump stocks; Oregon passed a bill preventing convicted stalkers and domestic violence offenders from buying and keeping guns; etc.), the only legislation that has passed on the federal level is a bill that incentivizes state and federal authorities in providing more data to the American background check database (President Trump has also announced plans to ban bump stocks, though the initiative remains in the public comment phase).

With congress failing to act, could change come from elsewhere?

A couple weeks after the shooting in Parkland, Ed Stack, the CEO of Dick’s Sporting Goods, one of the nation’s top gun sellers, appeared on “Good Morning America,” and announced that the company would cease the sale of assault style rifles and high capacity magazines, and that it would no longer sell firearms or ammunition to anyone under 21 years old.

"As we looked at what happened down in Parkland, we were so disturbed and saddened by what happened, we felt we really needed to do something," Stack told George Stephanopoulos.

The announcement gave the feeling of being inspired by a resigned sense of responsibility rather than righteous conviction. In a press release, caveated with support for the Second Amendment, Dick’s elaborated: “Following all of the rules and laws, we sold a shotgun to the Parkland shooter in November of 2017. It was not the gun, nor type of gun, he used in the shooting. But it could have been. Clearly this indicates on so many levels that the systems in place are not effective to protect our kids and our citizens.”

Shortly thereafter, Walmart, which stopped selling assault rifles in 2015 in response to low customer demand, announced that it too would raise the minimum age at which customers could purchase a firearm or ammunition, from 18 to 21. The company, America’s largest gun retailer, also removed products resembling assault-style rifles, such as certain toy guns, from its inventory.

In a vacuum, these policies likely won’t have much of an impact. For one thing, the gun market is incredibly diffuse. The four largest gun sellers in America control only five percent of the market. If a killer can’t find the gun they’re looking for at Dick’s, they’ll likely be able to find it in a small independent gun shop. Moreover, the majority of mass shootings involve the use of handguns rather than assault rifles — a very small percentage of homicides generally involve assault rifles. And the issue at hand isn’t age either: Only seven percent (11 of 156) of mass shootings since 2009 were carried out by men 21 or younger.

Still, big corporations, like Dick’s and Walmart, wield tremendous political and market power. Could their actions regarding guns be contagious, inspiring other gun sellers and politicians to enact basic gun reforms?

What Do Profits Prove?

This month, much of the news media, as well as supporters of gun control, hailed the Dick’s new gun policy as a success. Had it stopped a mass shooting from taking place? No one can say. Did gun violence fall nationally as a result? Again, uncertain.

Instead, somewhat ironically, the policy has been touted for being good for business. The company announced earlier this month that its stock price surged by 27 percent in the first fiscal quarter of the year. Additionally, its first quarter net income was $60.1 million on sales of $1.9 billion, which marked growth from its 2017 first quarter net income of $58.2 million and sales of $1.8 billion.

.@Dicks Sporting Goods has been a leader in taking commonsense steps in response to gun violence. They're proof you can SUCCESSFULLY do business as a gun seller w/out selling assault weapons or to anyone under 21. I hope more companies follow their lead. https://t.co/aC4GdIK1v4

The strong numbers were not necessarily caused by Dick’s’ internal gun reforms. The growth Dick’s experienced since Stack’s announcement was largely paralleled on the stock market by the growth of other publicly traded sportswear retailers, like Big 5 Sporting Goods and Foot Locker — the former of which enacted similar gun policies in 2016, the latter of which does not sell guns. But there is some evidence that changes in the stores’ gun policies helped.

The types of gun reforms embraced by Dick’s poll well. And in March, YouGov BrandIndex found that consumer perception “rose dramatically” for Dick’s, as well as for Walmart, after the stores announced their gun sale policy changes. “Likely because Dick’s was the first out of the box in such a high-profile matter, Word of Mouth tripled in a short amount of time, from seven percent of adults talking about Dick’s with family and friends on Feb. 28 to 25 percent [the first weekend in March],” YouGov found.

The rapid rise in buzz for Dick’s makes sense. If you listened to Brian Lehrer’s WNYC show the day of Dick’s CEO Ed Stack’s announcement, you heard the host and callers circulating locations of the nearest Dick’s store, a subtle push for fellow listeners to shop the brand. And in a May earnings call, Stack acknowledged new business as a result of the policy change: "There's been a number of people who have started shopping us, or said they're going to shop us more, because of the policy." Now gun control activists are hoping that Dick’s’ actions will provide a model for other companies. "Customers respect companies that stand up for their values in defiance of threats from the gun lobby, and we believe more companies will follow suit," Nick Suplina, managing director for law and policy at Everytown for Gun Safety, told Salon in an email.

But is Suplina being overly optimistic? Will the new Dick’s gun policy affect anyone outside of Dick’s and its shareholders?

The Limitations of Corporations Leading the Way Politically

Joseph Priester, an Associate Professor of Marketing at U.S.C., recently posed the Dick’s gun policy changes to his Marketing Strategy class. “We discussed how the horrible Parkland shootings may have triggered the emergence of a new, possibly large, customer segment,” Priester told Salon in an email. “The unifying need of this segment is to make purchases that reflect their frustration with gun laws.” The segment — and the conversation more broadly — is representative of the modern relationship between companies and politics.

Lately, whether it’s Starbucks or Chick-fil-A, politics has becoming increasingly central to brands’ marketing efforts, and corporations have been increasingly central in political battles. "To a greater extent than ever, the battle against extremism will take place on fronts that are operated and administrated by privately managed companies . . . Private companies will become powerful organs in the fight both for and against democracy, humanity, and civil liberties,” Ridge Montes, the founder of Impakt (a startup that automates ethical purchasing for online shoppers) wrote in a Facebook post, later published by Vox.

If Dick’s finds that its new gun policies create sustained customer loyalty, the question then becomes: Will other companies — and, more importantly, lawmakers — follow?    I posed that question to Michael Bloomfield, an Associate Professor in International Development at the University of Bath. Bloomfield has studied corporate activism extensively, particularly in the environmental realm. “We know that companies tend to follow the leader,” Bloomfield said. “Some of this is because they don’t want the reputational risk — a risk that will only increase as other companies change their practices to meet the demands of activists. Other times they copy just because they needed somebody to show them what to do and to show them that they could be successful in doing it.”

But while Dick’s may pave the way for other companies to feel comfortable modifying their gun policies, the gun market is likely too fractured for it to make much of a difference without political intervention. Just as gun reform may bring new progressive customers to a multifaceted corporation like Dick’s, emphasizing the leniency of gun restrictions may bring more conservative customers to smaller gun shops—of which there are a lot. “On the one hand, corporations have immense power,” Bloomfield said. “This power is financial, but it is also structural.

Policymakers often bow to perceptions of the ‘business interest,’ fearing economic and political repercussions if they pass policy that does not align with this interest. So getting business onside is often a crucial component to getting policymakers onside.”

To that extent, the most impactful move Dick’s made in the wake of Parkland may have been the letter the company wrote to elected officials in conjunction with its gun policy changes. In it, Dick’s advocated for passage of “common sense” gun regulations, including banning assault-style firearms, bump stocks, high capacity magazines, enhancing background checks and closing the private sale and gun show loophole. But, of course, with corporate power comes corporate responsibility — and more often than not, that responsibility is to profits rather than the people. “The really big downside of business taking the lead on these things is we are handing over responsibility to organizations that have a particular hierarchy of priorities, and we are legitimizing their right to make authoritative decisions on policy every time we do this,” Bloomfield said. “Business too often comes first.”

The sense I got? If we’re relying on corporations to lead the way on social and political issues, this time, and the next time, will not be different.