Roseanne's vicious Twitter lies about George Soros are the tip of an ugly, Nazi-flavored conspiracy iceberg 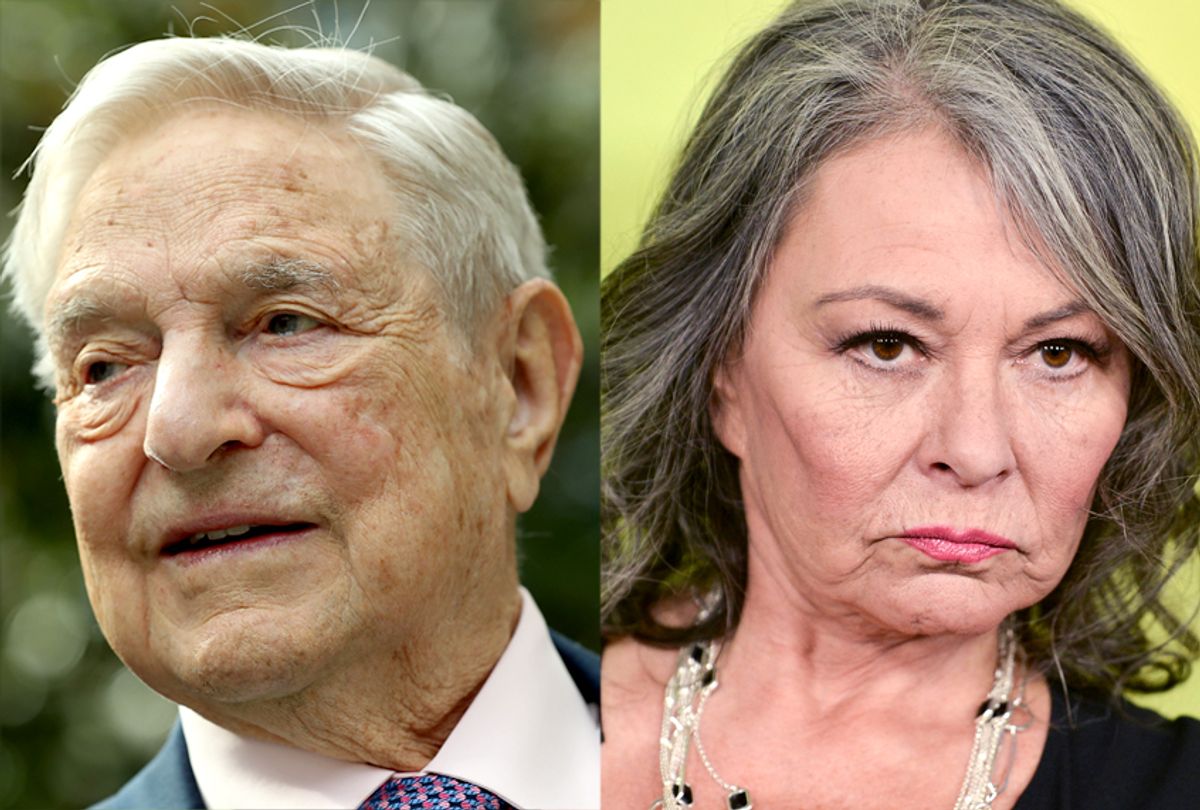 If George Soros did not exist, it would be necessary for the far right to invent him. Just as God needs Satan, Stalin needed Trotsky and Batman needs the Joker, modern reactionaries and nationalists need Soros.

The billionaire investor, philanthropist and liberal political donor is the ultimate villain in right-wing circles, and anyone who has heard the ravings of right-wing conspiracy theorists like Alex Jones, Dinesh D’Souza or Glenn Beck understands the central role that Soros plays in their paranoid worldview.

Soros, who is both Jewish and one of the wealthiest men in the world, helps reactionaries and nationalists make sense of a chaotic and confusing world. The billionaire is, as Jacek Kucharczyk of Poland’s Institute of Public Affairs told the Guardian earlier this year, “the perfect figure for explaining to hardcore voters why the world is the way it is.” The conspiracy theories that surround Soros, who is portrayed as the “puppet master” behind a “globalist” plot to create a New World Order, provide simple and emotionally satisfying answers to those who are desperate for them.

What, for instance, is behind the globalization that has been such a major factor in our rapidly changing world? According to right-wing nationalists, it is not the impersonal forces of free market capitalism and the shrinking of the world inevitably caused by technological innovation (i.e., the “global village”) but a secret cabal of globalists — led by Soros — who are plotting world domination.

To achieve this domination, these powerful conspirators seek to divide and conquer. Thus anything seen as remotely controversial or disruptive is often attributed to Soros and his octopus-like network of globalists, whether it’s NFL players kneeling during the national anthem, Parkland students fighting for gun control, "antifa" protesters, progressive activists protesting white supremacists in Charlottesville (indeed, one Republican congressman suggested that the white supremacists themselves may have been provocateurs funded by Soros), or LGBT activists promoting transgender rights.

The list of Soros conspiracy theories is endless. According to the conspiracists, Soros is both a Nazi and a Communist (no contradiction here) who is behind every progressive and social justice movement in existence. He also owns voting machines in more than a dozen states (to rig elections), is in “complete control” of the NFL (and is using it to incite a race war) and his life’s mission is to “destroy the United States,” just to name a few of the greatest hits.

Two weeks ago, of course, disgraced comedian Roseanne Barr promoted another popular and long-debunked conspiracy theory about Soros on Twitter (which the president’s son, Donald Trump Jr., retweeted), claiming that he “is a Nazi who turned in his fellow Jews to be murdered in German concentration camps and stole their wealth.” What makes this especially egregious is the fact that Soros was a Jewish survivor of the Nazi occupation of Hungary, during which he was just 13 years old. (This week, long after the damage was done, Barr finally got around to apologizing for the false accusation.)

There is a profound irony in this particular claim, as the entire “globalist” New World Order conspiracy is essentially a rehashed version of the Jewish world conspiracy that dominated reactionary thinking in the early 20th century (and ultimately led to genocide). While the explicit anti-Semitism has been expunged, it's never far below the surface: If one simply replaces “globalists” with “Jews,” the parallels become obvious.

The key thing to understand about reactionaries is that they are fundamentally hostile to the modern world and the idea of progress, and in the Jewish world-conspiracy — propagated by the infamous forgery, “The Protocols of the Elders of Zion” — Jews were the embodiment of modernity and the apparent degeneracy and corruption that came with it.

In his book “Warrant for Genocide: The Myth of the Jewish World Conspiracy and the Protocols of the Elders of Zion,” late historian Norman Cohn documented the rise of modern anti-Semitism and the Jewish world-conspiracy, explaining that in 19th-century Europe, Jews “came to be seen as symbolic of the modern world by those who most detested that world. . . . In industry and commerce, politics and journalism, Jews became identified with everything that was most wholeheartedly modern.” As a result, he notes, “it was possible to see in ‘the Jews’ the supreme incarnation of modernity, even while continuing to see them as uncanny, semi-demonic beings.”

This association of Jews with modernity and progressivism provided reactionaries with a convincing explanation for why the world was evolving as it was, while also satisfying the deep-seated anti-Semitism of the traditional elites. “It was above all the landed aristocracy and the clergy who saw in ‘the Jews’ a symbol of all that most threatened their world,” Cohn writes, “and not only their material interests but the values that gave meaning to their lives. These people were only too happy to believe that such alarming changes must spring not from any defects in the old order, nor from impersonal historic processes, but from the machinations of a handful of devils in human form.”

The same language that was used by anti-Semites to describe Jews in the early 20th century is now used to describe the so-called globalists, who are portrayed as demonic, degenerate and bloodthirsty subhumans out to destroy Western civilization and create a totalitarian world government.

The fact that George Soros, the apparent “puppet master” of this globalist conspiracy, is Jewish, can hardly be interpreted as a coincidence. Of course, not everyone who has accepted this conspiratorial worldview is anti-Semitic (at least not deliberately), but there is little doubt that the narrative they are pushing stems from the Jewish world-conspiracy that fascists and other reactionaries espoused a century ago.

Roseanne Barr, like President Trump, personifies what the historian Richard Hofstadter called the “paranoid style” in American politics. Reactionaries are naturally more prone to this style because to them the entirety of history resembles a sinister plot. Their ideology fails to offer an accurate and systemic critique of modernity, so they must resort to conspiracy theories to make sense of the modern world.

While it is tempting to dismiss these paranoid souls as fringe lunatics, this is obviously no longer an option with Donald Trump in the White House. The only choice, then, is to expose these deranged and dangerous conspiracy theories for what they are and to resist the paranoid style that has come to dominate our current age.

The fake news era: 500 years in the making

Author Kurt Andersen on the five centuries of lies and conspiracy theory that led to this moment.