Republican voters are driving out candidates seen as disloyal to Trump — will they sink their party in the process? 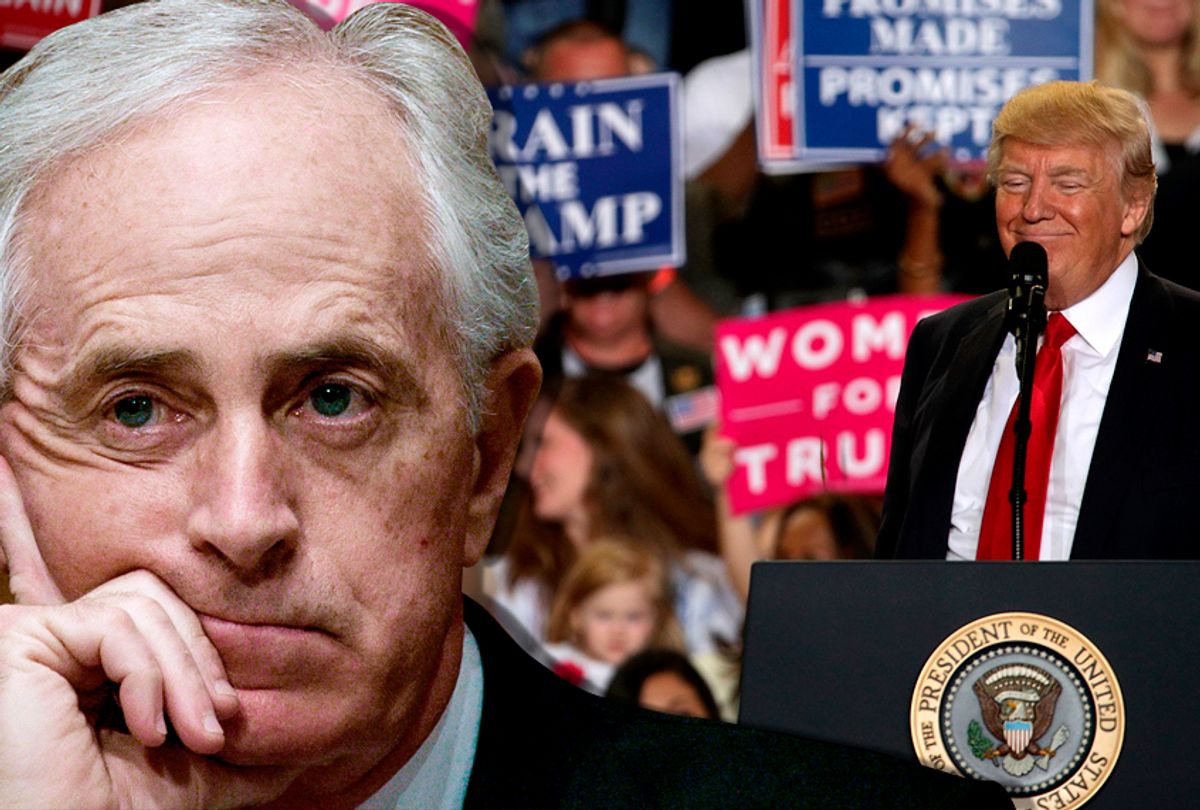 At the moment, the Republican Party's biggest challenge, strategically speaking, is the fact that its own voters can't quit President Donald Trump.

"We are in a strange place. It’s almost, it’s becoming a cultish thing, isn’t it? It’s not a good place for any party to end up with a cult-like situation as it relates to a president that happens to be of, purportedly, of the same party," Sen. Bob Corker, R-Tenn., told NBC News on Wednesday.

While Corker's comment came in reference to the party's refusal to consider legislation that would have checked Trump's ability to implement new tariffs, he could just as easily have been talking about this week's primary results.

There's no better example then the Republican primary in South Carolina's 1st congressional district, where incumbent Rep. Mark Sanford was ousted by a challenger who mercilessly attacked him for his anti-Trump apostasy. A few weeks earlier, Rep. Martha Roby suffered a similar (if less dire) fate in Alabama's 2nd district where she failed to breach 50 percent of the popular vote and was forced into a runoff with Bobby Bright, a former congressman (and former Democrat) who came at her from the Trumpian far right.

"I will say that Roby may be a better case of this than Sanford because Sanford may have already been a little weak," said Geoffrey Skelley, media relations coordinator for the University of Virginia Center for Politics and associate editor of Sabato’s Crystal Ball, in an interview with Salon. "In 2016, he won 56 percent of the primary vote, so that may be evidence that he wasn't that strong to begin with.

"With Roby, you can even see it in the general election result in 2016," Skelley added. Roby won that race easily, but "there was a big write-in vote, and she didn't win by as much as you might think in her district. The fact that a former Democrat is her opponent in the runoff there is pretty striking.

"I haven't followed Bright's campaign closely, but I would assume that he's running in some degree in support of the president because he couldn't get in that position otherwise," Skelley continued. "But if Roby loses to a former Democrat who voted for Nancy Pelosi for speaker of the House, that would be really telling" in terms of Republican voters' priorities in one of the safest seats in the nation. "Disloyalty to the president," he added, has become "unforgivable."

The fact that Republican voters won't forgive any perceived disloyalty to the Trumpian cause — whether it's Roby criticizing the future president after the "Access Hollywood" tape dropped during the 2016 campaign, Sanford claiming that Trump had increased hate in America or politicians like Corker, Sen. Jeff Flake of Arizona and Rep. Charlie Dent of Pennsylvania expressing dismay over an array of policy and personality questions — is almost certain to hurt the party's political prospects in the long-term. This isn't simply because Trump's approval rating is in the low 40s and hasn't been above 50 percent at any point during his presidency. It's also because, from a policy perspective, this president has set America on a path that is bound to boomerang against it in the future.

Take the tariff issue that Corker raised. When Trump alienates Canada or Mexico or the G7 nations with his tough talk about tariffs, he doesn't merely weaken some of America's most important geopolitical alliances. He also endangers the foundations of the American economy.

"One of the great accomplishments of the post-World War II era was developing a more rational system of trade . . . that would help to prevent these kinds of tit-for-tat tariff retaliations," Ed Gerwin of the Progressive Policy Institute told Salon in April. "I'm very concerned that what the administration is doing is attacking the very foundations of that post-war, rules-based trade regime . . . [which] has been hugely beneficial to the United States, despite some of the political rhetoric that you hear. I'm very concerned that this kind of non-strategic lashing out when it comes to tariffs is going to end up really harming the United States as much as anyone globally."

This is precisely the type of economic setback that Corker is ostensibly trying to avoid, and one might think that other Republican politicians — members of a party that has broadly supported free trade for the last 80 years — would be at least receptive to it. Instead, how did they react to Corker's admonition?

On Wednesday, Trump loyalist Rep. Matt Gaetz, R-Fla., said it all: "I think that Sen. Corker is a little upset that he got passed over for secretary of state."

A similar problem could emerge in an area where Trump recently claimed a major achievement — namely, his Singapore summit with North Korean dictator Kim Jong Un. Although the president's supporters are lauding that as a great foreign policy victory, it may not look that way for long. In April, Salon spoke to Jamie Fly, a foreign policy expert with the German Marshall Fund who served as foreign policy adviser to Florida Sen. Marco Rubio (yes, a Republican) during the 2016 presidential campaign. Fly's comments foreshadowed precisely what happened in Singapore — namely, that the president essentially got nothing from North Korea, despite making major concessions — as well as the possible consequences.

"The challenge for President Trump will be that, at the end of the day, even if he goes through with the summit, it's very unlikely that the North Koreans will agree to make significant concessions related to their nuclear program," Fly said. "Previous administrations have been through this cycle of escalation and negotiations in the past, and it hasn't produced any significant change in the trajectory of North Korea's weapons of mass destruction or its missile programs."

If Trump "comes out of the summit without any significant offers by the North Koreans," Fly continued, "I think he's going to face a tough choice pretty quickly of whether he continues the pressure campaign through additional sanctions and economic pressure. But given his rhetoric in the past, he may have to face expedited consideration of various military options."

Even if economic or foreign policy catastrophes don't ensue, the political arithmetic itself is still not favorable for Republican voters who are so enthusiastically tying their party's future to the current president.

"Looking at things like the president's approval rating . . . and the generic ballot being favorable to Democrats -- how favorable is up to debate, it's moved around a bit -- I think that it's definitely the case that a Republican who is critical of the president is risking their political health," Skelley told Salon. "If you look at approval polls, Trump's approval is somewhere between 80 and 85 percent among Republicans. . . . If you're critical of a guy who's that popular, you're opening yourself up to a very easy attack by a primary opponent."

But that fanatical loyalty comes with a cost, which may become clear in the 2018 midterms and again in the 2020 presidential election. "Even in a midterm election where most of the voters who show up are going to be partisans one way or the other, the president is so toxic to Democrats and a lot of independents that enforcing . . . strong loyalty to the president could lead to a number of Republican members losing," Skelley said Salon. "It's going to be very easy to tie them to the president, whether they want to be or not."

He added, "There is a very hardcore, fervent element of the GOP base that is fully behind the president. That's not the entirety of the GOP base, but it is a lot of it, and they end up enforcing loyalty to some degree. The politicians who are exhibiting disloyalty or who are at least critical of the president -- most of them aren't running for re-election. . . . It's not hard to see why."