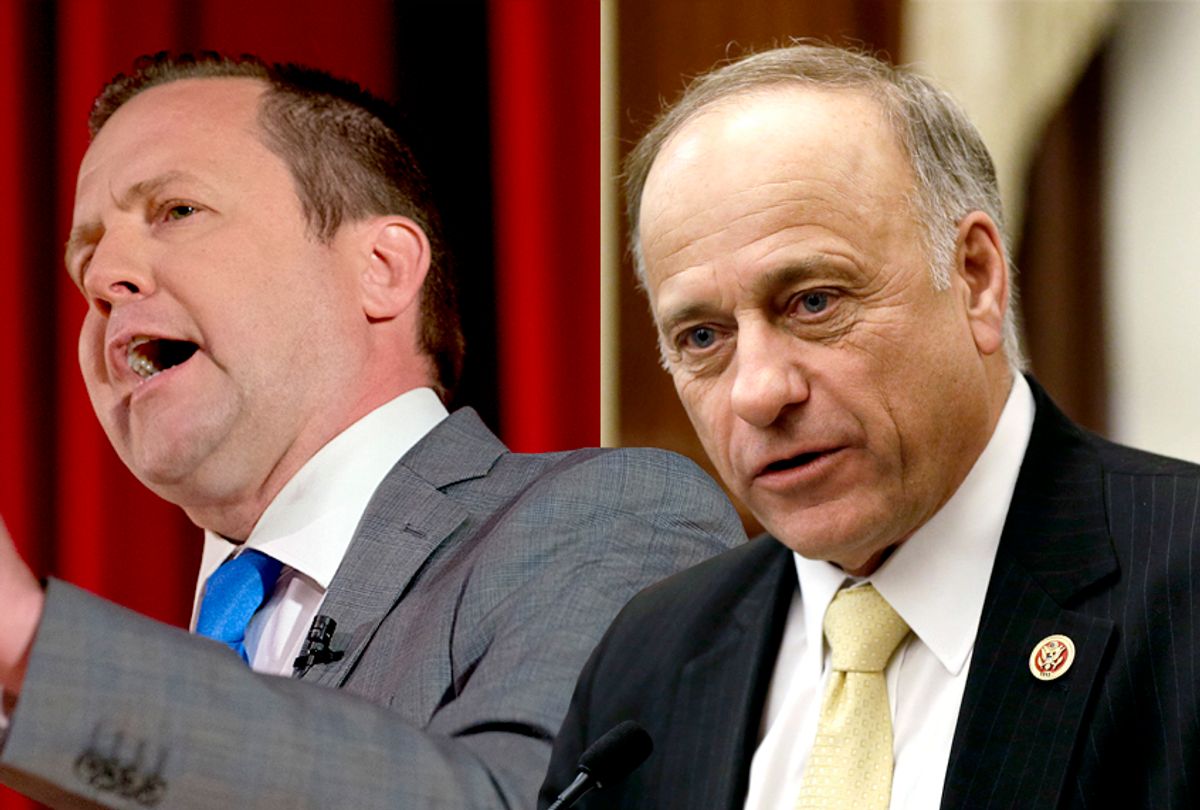 President Donald Trump is not the only prominent Republican with a racism problem.

Just look at Rep. Steve King of Iowa and the recently minted GOP candidate for Senate in Virginia, Corey Stewart, both of whom have a long history of spreading racist rhetoric. Their treatment is in many ways the tale of two Republican parties — and, more specifically, how the GOP can have wildly varying approaches toward addressing problematic attitudes within their own party.

We can start with Stewart, who on Tuesday won the Republican primary to be the GOP's nominee against Sen. Tim Kaine, a Democrat, in November. Stewart's racist past was best explored by CNN's Chris Cuomo on Wednesday. During the interview, Cuomo put up a fact sheet that pointed to how Corey Stewart had referred to far-right Republican congressional candidate Paul Nehlen as one of his "personal heroes" roughly one year after Nehlen "shares tweets defending anti-Semitic Twitter user."

"Here's the situation: Everybody supported Paul Nehlen. President Trump said nice things about Paul Nehlen. Sarah Palin did. And Ann Coulter. Laura Ingraham. A lot of us. The late Phyllis Schlafly did. And then all of a sudden after that, after all that, then about a year later, Paul Nehlen starting coming out with all these terrible things, these anti-Semitic things, these terrible bigoted things. At that point we, of course, we wanted nothing to do with it," Stewart told Cuomo.

After this, Cuomo pointed out that Nehlen made disparaging comments about Muslims and immigrants, as well as propagated anti-Clinton conspiracy theories, and that Stewart gave money to Nehlen despite (or perhaps because) of these statements. Stewart pivoted away from the accusations by claiming that Cuomo, Kaine and the far left were trying to distract from President Donald Trump's supposed successes.

Yet it isn't simply the left which is wary of Stewart. Sen. Cory Gardner, R-Colo., who is also the National Republican Senatorial Committee Chairman.

"At the senatorial committee we're focusing on Missouri, Indiana, North Dakota, Montana, West Virginia and Florida. There are great races around the country. [Virginia] is not the map. We have a big map this year, and what I've laid out in races that I've talked about, Virginia's not on it," Gardner told reporters after being asked about Stewart's victory in the Virginia primary, according to Politico.

It is worth noting that, even before Stewart won the Republican nomination, The Weekly Standard's John McCormack wrote an editorial in which he drew attention to Stewart's support for Nehlen, his support for Confederate monuments, his past support for birtherism and other fringe conspiracy theory views and his association with Jason Kessler, one of the anti-Semitic Charlottesville protesters. Although Stewart later rejected his association with Kessler, McCormack noted that he had been more reluctant to disassociate himself with Nehlen.

When asked for comment on Nehlen, Stewart’s campaign issued a statement Monday evening to THE WEEKLY STANDARD that reads in full: "Sadly it's unsurprising to see the establishment Republicans continue to play the race card against President Trump's most vocal supporters." There was no repudiation of Nehlen in that statement. Asked again Monday night if Stewart still thinks of Nehlen as a “hero” in light of Nehlen’s rank bigotry, the campaign has provided no further comment. Stewart’s rejection of Jason Kessler but silence on Paul Nehlen is bizarre, to say the least, as a matter of politics.

On the other hand, there is the Republican response — or, more precisely, the overwhelming non-response — to Rep. Steve King, who continued a long history of racist statements when he retweeted a post by British white supremacist Mark Collett that heralded growing anti-immigrant sentiment in Italy and expressed hope that America would do likewise, according to the Des Moines Register.

King’s retweet drew outcry from liberal commentators and websites for its substance, as well as the relative silence of his Republican colleagues in the House. House Speaker Paul D. Ryan (R-Wis.), who has rebuked King in the past, did not immediately return a request for comment sent to his office.

King has made other outrageous statements in the past. In March 2017 he tweeted an anti-immigrant statement that many accused of being racist.

King later defended his views on CNN, arguing that "we have an element of Americans here, and that's a big element, that rejects Western civilization, then what have we?" He also claimed that "I am a champion for Western civilization" and argued that his remarks could not have been racist because he was talking about how "it's the culture, not the blood" and that "it's not about race, it's never been about race... It's a clash of cultures, not the race."

While prominent Republicans like Speaker of the House Paul Ryan and then-White House press secretary Sean Spicer denounced King's comments, he was not punished in terms of committee assignments or other ways that the GOP can chide wayward members of their party.

King, like Stewart, is outspoken in his embrace of anti-immigrant politics and of being pro-Confederate flag, even displaying the flag in his congressional office despite Iowa having fought for the Union during the Civil War. In other words, the fact that he has racist views and is willing to support other racists like Dutch politician Geert Wilders is hardly a surprise. Yet so far when he has uttered those convictions publicly, his fellow Republican politicians have not punished him.

What is the reason for the discrepancy between how the GOP has reacted to Stewart and King?

The most obvious explanation is also the most likely one: Stewart, unlike King, is not an elected official. Indeed, because Kaine is expected to have an easy time winning his reelection campaign, it is unlikely that most of the establishment Republicans distancing themselves from Stewart now will ever have to eat their words later.

If by chance Stewart does get elected, however, he may wind up receiving a treatment very similar to another outspokenly racist Republican candidate who was widely expected to lose but pulled off an upset. That candidate is now President Donald Trump, and like King, the fact that he now has power seems to make all the difference in terms of how he is treated by his own party.