The way of fatherhood, "Cobra Kai"-style: Watch this show today with your dad — or your kids

Johnny Lawrence and Daniel LaRusso are imperfect dads. But this show makes heroes of both for learning and trying 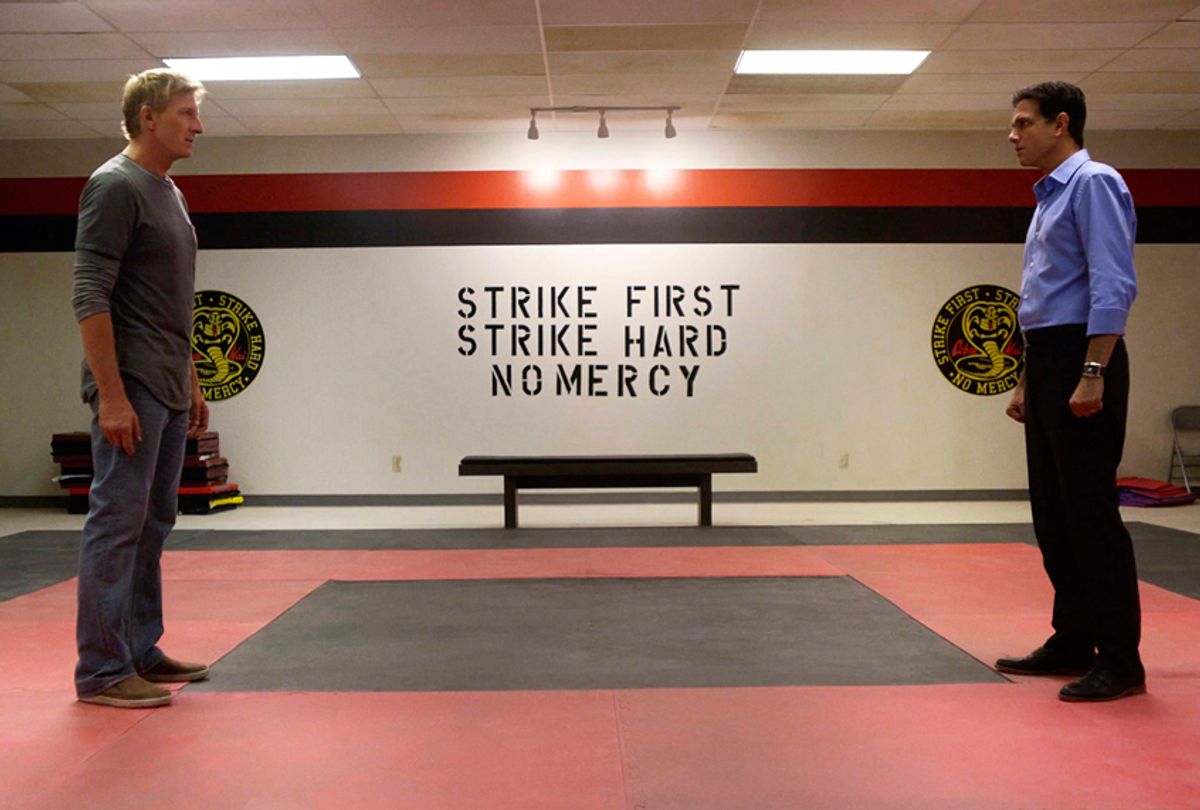 There are hundreds of lists specifying the qualities and duties of a good dad, but no single definitive guidebook on the subject. A shame, and damn confusing, because although most of these lists contain similar versions of the same good advice, like "love your mother," or "don't be the absent dad," or the all-important golden rule, "don't abuse your kid, ever."

Rarely, if ever, will you find the suggestion to teach your kid how to throw a punch. Dealing with confrontation, maybe, but even then, the emphasis is on making it clear that sometimes the strongest thing to do is walk away from a conflict that's impossible to defuse. As for what to do if that conflict chases you, well, what then? Is it a father's job to impart a few offensive and defensive hand-to-hand skills into his child's bank of knowledge? And if not the parent, then who?

I'm not advocating for or against this recommendation, but the question turns over in my mind after watching "Cobra Kai". . . for the third or fourth time. YouTube Red's binge-worthy revival taps into and expands upon the nostalgia Generation Xers have for the 1984 classic that made Ralph Macchio a heartthrob as scrawny Daniel LaRusso. William Zabka's Johnny Lawrence also made a mark as the bad boy and top student at the formidable San Fernando Valley dojo that inspired the TV series' title.

YouTube released only the first two episodes for review prior to the debut of "Cobra Kai," in which series heads Josh Heald, Jon Hurwitz and Hayden Schlossberg played up the decades-old rivalry between Danny and Johnny.

Only now, three and a half decades following that fateful kick to the face, Danny's on top of the world, a rich man with a chain of auto dealerships, a country club membership and considerable pull in the local business community. Johnny, who never recovered from that loss at the All-Valley Under 18 Karate Tournament lo those many years ago, is a marginally employed drunk. This would seem to be poetic justice, given what we know about Johnny, and that's very little.

The other episodes of "Cobra Kai," however, build another muscle in the narrative, a story that speaks to the truth that inevitably — somehow, some way, and in spite of their best efforts and intentions — every father screws up. Hard, sometimes.

"The Karate Kid" is a film about a fatherless boy finding a mentor, Mr. Miyagi (the late Pat Morita) who lost his own wife and son in an internment camp in World War II and gets another shot to be a father. In return, Miyagi can pass down important life lessons to a second son, including how to throw a punch, the right way and for the right reasons.

"Cobra Kai" begins with a contrarian role reversal, presenting Johnny as the underdog who can't get a break, and Danny as the bully taunting him from afar at first, and then directly once his ego is provoked. Beyond this familiar enmity, the series mines the much richer vein of exploring what happens to fatherless sons, and how the mistakes of less capable paternal figures can be passed down, unintentionally, to another generation.

We know Danny's father died; we assumed, from the movie, that Johnny's rich dad is the reason he's a spoiled brat. Only in episode 9, "Different But Same," does Johnny reveal to Danny in a rare moment of truth and truce what viewers find out in the premiere — his stepfather (Ed Asner, in a cameo) was horrible to him. "I'd come home and pretty much get bullied every day," he says quietly. "That's why I joined Cobra Kai. Kreese gave me more attention than I ever got at home. Guy was more than a sensei to me; he was basically a father."

Problem is, Kreese (Martin Kove) was a hateful, ruthless man who shattered Johnny's trophy and tried to kill him. Kreese must have been the devil incarnate, considering that Johnny's gentler approach to weed out Cobra Kai material from the chaff that walks through the dojo's door involves subjecting one class to a barrage of insults and rewarding the bravery of those who stay by requiring each of them to take a punch to the face.

Johnny's greatest defeat is a dot in his rearview mirror. In removing himself from the life of his kid Robby (Tanner Buchanan) almost entirely, he becomes a ghost for Robby to rebel against. So much for that "Don't be the absent dad" rule. Robby's mother has more or less checked out as well. As a result, Robby is a dropout and degenerate when we meet him, running with a pair of dead-end losers who commit ever-escalating crimes. And to get under his father's skin, he gets a job at Danny's car dealership as a lark at first — until Danny hooks Robby with the "wax-on, wax-off" treatment.

Danny is the bright balance to Johnny's aggro darkness, living in a mansion with his smart, supportive wife Amanda (Courtney Henggeler) and their two kids, including teenage daughter Sam (Mary Mouser). Sam has a good heart but, like many teens do, she falls in with the cruel popular kid clique for a time. Never is she a full-fledged participant in their bullying, especially when they target Sam's awkward former best friend Aisha (Nichole Brown) or the gentle new kid Miguel Diaz (Xolo Maridueña). Danny's raised her right.

Danny's also too permissive. He talks a good game about raising his kids scrappy and "Jersey tough," yet when Sam invites her jerk squad over to throw a party without gaining Danny and Amanda's permission, the overindulgent dad sternly lectures her before cleaning up after all of her miscreant buddies.

The secret chi of "Cobra Kai" doesn't rest in how Danny dotes on Sam, but in how he becomes a father figure to Robby — and how Johnny finds some redemption, though the kind with a twist ending, in passing on imperfect lessons about how to be a man to his star pupil Miguel, a surrogate for the son he presumes to have lost.

Here's the thing: Cobra Kai's motto of "Strike First, Strike Hard, No Mercy" isn't entirely sinister. His students learn to stand up for themselves, gaining confidence, learning to put every ounce of power in everything they do. That's a positive lesson. His students also inspire him to be a better person, to show up and connect with others — Miguel's family in particular — and to pick up the fight to regain his son's trust.

In the challenger's corner, though, Danny's ravings about Johnny's dojo ruin Sam's budding relationship with Miguel. For a time Danny turns on Johnny's son Robby, the kid who embraces the lessons Miyagi imparted to him.

And the series retraces many of the indelibly memorable scenes, nudging forth affectionate memories with new versions of essential scenes and images throughout the season — that skeleton costume, that first date at an amusement center and arcade, only this time lived in by young stars. Part of this is intentional pandering to any children of the '80s tuning in, but the writers pull it off because it serves the larger purpose of telegraphing a warning: This is history repeating. Sure enough, just like all fathers, Danny and Johnny screw up their teachable moments in a way that impacts their children in ways yet to be seen.

Johnny almost gets it right, including that interpretation of "No Mercy," explained to his students as the only way to confront life's unfairness. "Just when you think things are going good, everything falls about. That's how it goes. Life shows no mercy, so neither do we."

Do whatever it takes to keep your head above water, to keep moving forward, he says. Remember who you are, he tells them. It's all so uplifting, only a hair away from Coach's "clear eyes, full heart, can't lose" motto on "Friday Night Lights". . . right up to the part when Johnny tells his youngsters, "All right guys! Now let's go down there and kick the shit out of everybody!"

Yeah, he bungles the belt test there. There's nothing wrong in empowering underdogs to find their fangs and claws, but Johnny forgets to impart the lesson to back off, to stave off the transformation from victim into assailant.

None of this answers that first question of whether it's a father's duty to teach his son how and when to fight. Watching "Cobra Kai" might solve that problem for all you dads. Indeed, it may be the most apt viewing pleasure for fathers and their children to enjoy together on this day for dads. It's one of the most honest and hilarious series of 2018, exciting and heartbreaking, so good and incredibly badass.

"Cobra Kai" won't necessarily sell any parent on the merits of the Way of the Fist, but that was never its mission. The first season's final victory leaves us with a better message, not so much advice as assurance that no father or father figure is all-knowing and without flaws, that no villain is irredeemable, that it's never too late to be a better man and set an example for sons, and daughters, to follow.

Macchio talks to Salon about what inspired him to reprise the role of the "Karate Kid," Daniel LaRusso