Ireland, the way God Himself intended, one pub at a time

In a country drowning in the stuff — much of it mediocre, one man says he has had the perfect pint of Guinness 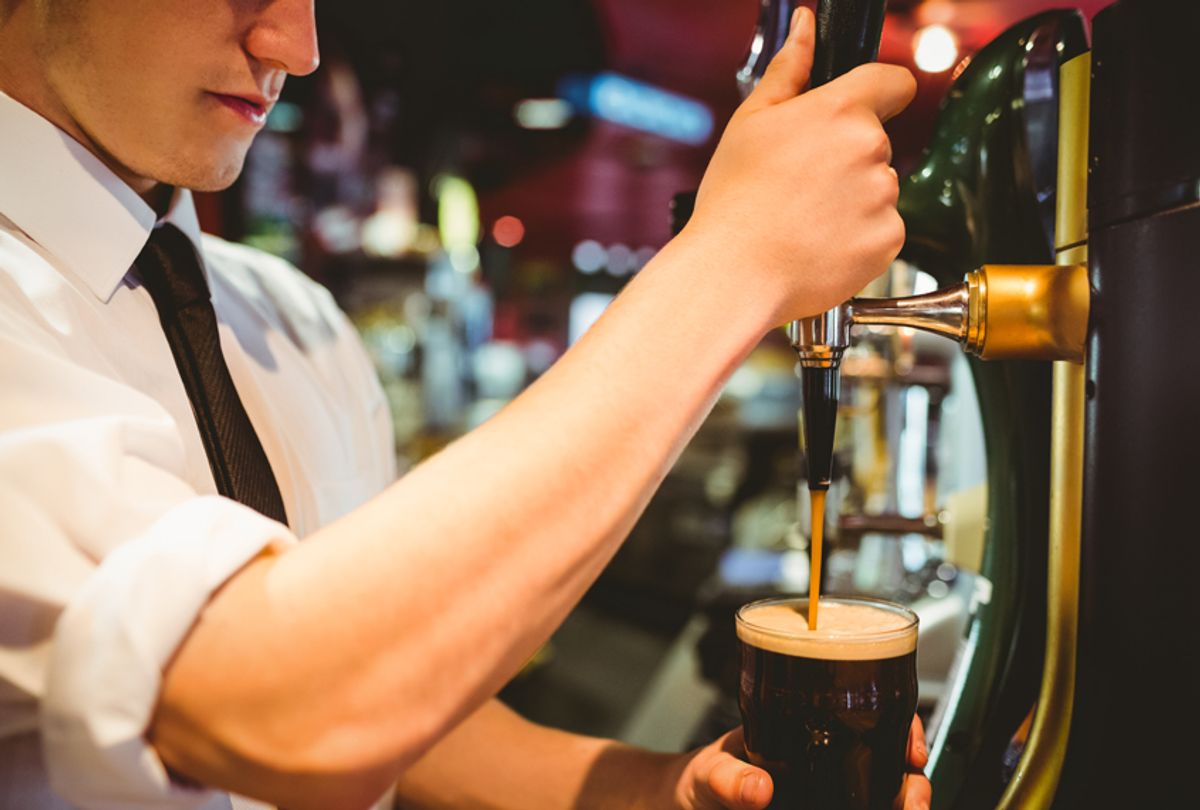 You could say my fascination with the Irish pub began long before I set foot in Ireland. Like so many other romantics, I was steeped in the allure of the country through the work of its great writers and musicians. I’d seen "The Quiet Man" far too many times as well, and though I knew the movie was sentimental, filled with stereotypes, and deliberately unreal—a “beautiful travelogue,” John Ford called it—I let it color my perceptions and felt compelled to start looking for a local as soon as I rented a place in Ranelagh, a Dublin village south of the Liffey.

I wanted a pub with a timeless quality. It should be homey and welcoming, and have a strong sense of community. The pub I imagined embodied the virtues often associated with Ireland – kind and gentle, polite, good-humoured, and devoted to the spoken word in all its base and exalted forms. I saw it as a refuge, a safe haven with worn wood floors, a bar that could tell stories, gents in flat caps, and a turf fire blazing on cold winter nights. In my innocence, I assumed such a pub would be easy to find, but it took lots of leg work and many pints of Guinness before I met with any success at all.

After a run of false starts, I discovered John Mulligan on Poolbeg Street, a half block from the Liffey. The street once led to Pool Beag, or little pool, among the deepest anchorages in Dublin Harbor. When the original John Mulligan leased his premises in 1852, he competed with two women publicans, a Mrs. McGrath and a Miss McCaul, for business and managed to outlast them both. Thirsty dock workers flocked to his pub as did the traders from the Corn Market nearby. Actors from the old Theatre Royal were also fond of Muligan’s. Judy Garland, Nat King Cole, and Roy Rogers (without his stuffed wonder horse Trigger) all sampled pints while they trod the boards.

Mulligan’s looked humdrum from outside, just a dull pair of yellow storefronts with a brick-fronted lounge bar in between. So little light filtered through the streaked windows I felt as if I’d stumbled into a decrepit country manor only recently opened to the air again after the death of the owner. I took it for an honest, unaffected pub still in its original condition, where the talk of its patrons took precedence over any recorded music or a TV blaring a rugby match. In spite of its humble appearance, Mulligan’s did have a Web site, so I recognized the guy behind the bar—Christie, who wore a broad, inviting grin and had the sturdy frame of a baseball catcher.

Christie studied me with an eyebrow arched in amusement, probably because I shifted from foot to foot in a nervous way to keep from blurting out that I knew him, sort of, from the Internet—exactly the kind of foolish stab at familiarity a tourist from America would be inclined to make, and I considered myself a fully-fledged Dubliner by now. Luckily, I repressed the urge to be chummy and retreated to the lounge bar, a name that implies a degree of comfort that did not truly exist at Mulligan’s.

Instead my sense of a decaying country manor was enhanced. The lounge had only a few sticks of furniture, as if the rest had been sold off to pay the late squire’s debts. (In fact, James Mulligan, a member of the clan, banned stools and chairs in his day because he believed real men should stand up when they drink. The ban ended in 1932.) The walls were a rich rose color and adorned with a half dozen framed etchings of scenes from Shakespeare’s plays. The only customers were two lads from Trinity College, who were talking about the meaning of life or the desirability of Polish women—more than 100,000 Poles lived in Dublin at the time—or possibly both.

I took a seat at a long, hard refectory table. I was eager to see if the Guinness Christie poured would match its reputation. Through the sheer drudgery of tasting so many pints, I’d become a semi-expert and now approached my jar with the severity of a veteran sommelier assessing a vintage Chateau d’Yquem. How does the beer look and smell? Is the temperature just right? Has the stout been allowed to settle? Far too often I’d been served volcanic pints that erupted like Vesuvius and spilled over the rim of the glass onto the bar and/or my jeans. I’d drunk oddly flavorless pints, too, and pints with a taint of burnt barley, and pints so dreary I almost suspected them of being doctored with dishwater, a trick not unheard-of in earlier centuries.

Time passed slowly at Mulligan’s, or perhaps it ceased to exist. Somewhere my pint rested, and as I waited my mind began to drift. Again I was struck by the sleepy nature of the lounge, and I remembered another Christy (spelled differently) from John Millington Synge’s "The Playboy of the Western World." In the play, Synge describes how that Christy bursts into a tranquil pub in County Mayo, startles the regulars by confessing that he’s killed his father, and so entrances everyone with his tale he becomes something of a town hero.

The seed of the play grew while Synge lived in rented rooms on Inishmaan, the largest of the Aran Islands. He hung out in pubs and listed to the stories that the locals told, usually in Gaelic. One story concerned a refugee from Connacht who fled to Inishmaan, bragged that he’d killed somebody with a spade while in a passion, and begged his new friends to protect him. He spent weeks hidden in a hole, and nobody turned him in despite the chance of a reward. People were sympathetic, Synge speculated, because the criminal had clearly been distraught. “Would anyone kill his father if he was able to help it?” they reasoned.

All literary thoughts fled when my pint arrived at last. The stout didn’t froth, bubble, or threaten to erupt, nor did a ripple run through it anywhere. It radiated a sense of calm, if such a thing were possible, and Christie delivered it precisely when the beer had completed its gyrations and settled completely. The pint was picture-perfect. A quarter-inch of foam topped the black stuff with its slight ruby tinge, and the stout was cool, not ice-cold, and tasted crisp and very clean on the palate. Could Christie perform the same feat twice? I put the challenge to him, and he accepted. His second pint duplicated the first in every detail, an accomplishment worthy of a citation in, well, "The Guinness Book of World Records."

My praise was excessive—probably way over the top to judge by the ironic look Christie gave me. He’d heard overawed Yanks spout such nonsense before, but I ignored his look and asked why every pub didn’t serve such an honourable pint. The duties of a barman aren’t as demanding as they once were, after all. Before Guinness introduced draft stout in sealed aluminium kegs in 1961, the barmen participated in a weekly bottling carnival, transferring the beer from barrels into bottles that needed to be washed, sterilized, and capped. Each pub had its own label, and it was pasted on by hand. The art of pulling a modern-day pint seemed simple in comparison, so why did it often go wrong?

Here was the voice of experience. How many times had a callow lad slaving for the minimum wage poured me an unsatisfactory Guinness? Too many to count, really, although I couldn’t blame the poor rookie because he’d never been trained except in the most basic skills. When I looked at Mulligan’s Web site again, I saw that the barmen were men in their thirties, forties, and beyond, who were devoted to the pub, their jobs, and their teamwork. Tommy and Con Cusack, the owners, seldom lost or fired an employee, but elsewhere there were “Help Wanted” signs posted in most pub windows.

In the spirit of further research, I later consulted two guidebooks, curious about their take on Mulligan’s, if any. The Rough Guide included a line about the “best Guinness in Dublin,” and Lonely Planet repeated it, also noting that the pub had been a stand-in for Daniel Day-Lewis’s local in "My Left Foot." LP listed twenty pubs that deserved a look (way too high in my estimate), not counting twelve “trendy” bars I hoped to avoid forever, while the Rough authors logged an astonishing thirty-eight pubs to try, leading me to the inevitable conclusion that the public house is a vital aspect of Ireland’s tourist industry.

In a relatively recent Visitor Attitude Survey, the Irish Tourist Board offered qualified support for that idea. As usual, the Irish people were the country’s primary attraction, although the admiration for their sociability and all-around charm had declined steadily for the past few years, maybe because a booming economy had created an imbalance and fostered a certain tension between the haves and have-nots who no longer mingled quite so casually.

Next on the list were Ireland’s scenery (inarguable) and its Culture/History (somewhat arguable unless you have an insatiable appetite for castles and ruins). If you skip over the next three “attractions” as attributes rather than entities (English Speaking, Access/Easy to Get To, and Restful/Relaxing), pubs hold down fourth place, yet most visitors insist they rely on them for the food rather than the drink, a contention that may require another survey to determine the relative honesty of tourists.

At any rate, my visit to Mulligan’s gave me a boost. If the pub didn’t tick all the boxes, it came awfully close and renewed my faith that somewhere on the Emerald Isle—if I kept seeking—I’d eventually stumble on a doppelganger for John Wayne’s haunt in "The Quiet Man" and feel my efforts hadn’t been wasted. With a renewed sense of mission, I continued my quest.

Excerpted with permission from A Pint of Plain: Tradition, Change, and the Fate of the Irish Pub by Bill Barich. Copyright 2018 by Skyhorse Publishing, Inc.

Bill Barich is the author of numerous books, among them "Big Dreams: Into the Heart of California" and "The Sporting Life." He has written extensively for the New Yorker, as well as Playboy and Sports Illustrated. He has been a Guggenheim Fellow in fiction. Barich lives in Dublin, Ireland.