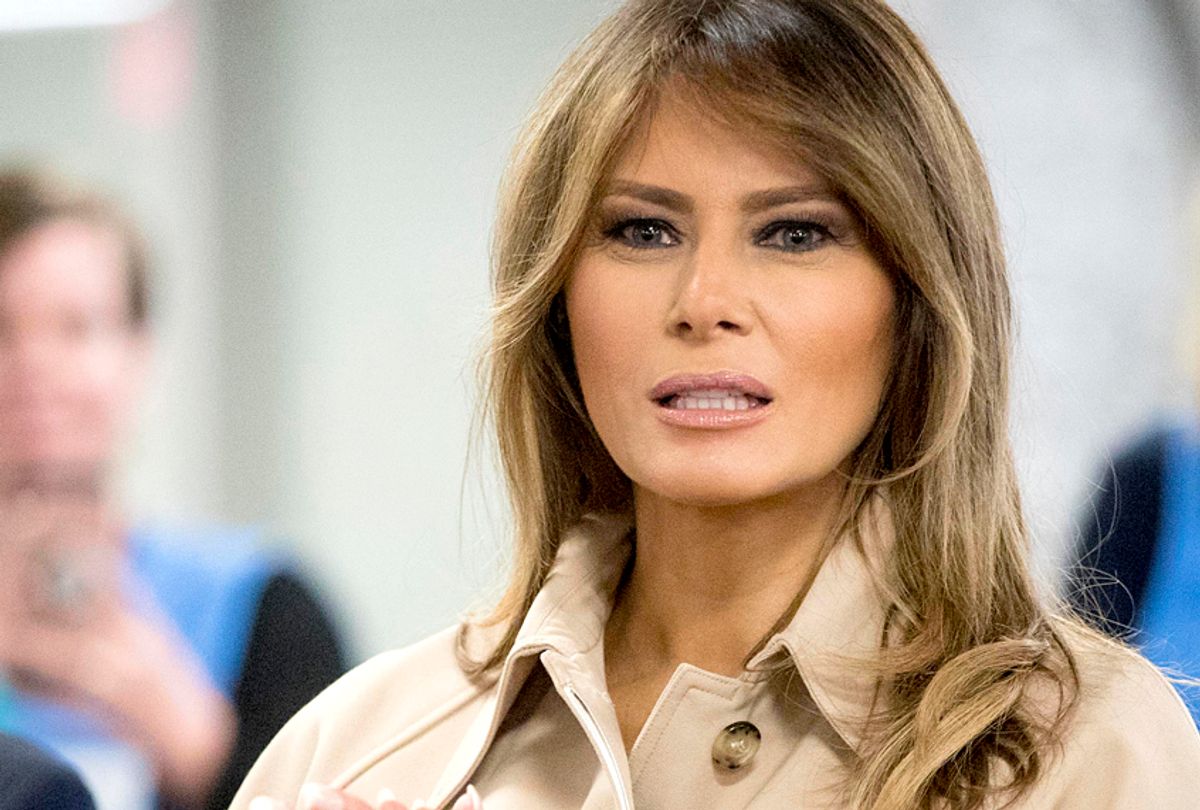 So much of the country has been tuned in to the Trump administration's horrific policy of charging every adult that illegally crosses the border with a federal crime, which also means separating their children from them. Stories and images of immigrant families being ripped apart are front and center of the news cycle, as President Donald Trump and his team offer various false and misleading explanations for why this is happening, including that it's the Democrats' fault (Trump), it's in the Bible (attorney general Jeff Sessions) and it's actually not even a policy (Sec. Kirstjen Nielsen).

In a rare move, and indicating the gravity of this immigration crisis, First Lady Melania Trump has also weighed in.

Melania's statement marks the first time she's touched on immigrant families since becoming first lady. In May, she revealed her "Be Best" platform, which focuses on issues affecting children, like their "well-being, social media use, and opioid abuse." While Melania is the first naturalized U.S. citizen to become first lady and knows first-hand how it feels to be an immigrant in this country, her platform made no mention of immigrant children.

Trump's new zero-tolerance immigration policy was announced on May 7, but the Justice Department had said even a month prior that it would be prosecuting 100 percent of the cases related to illegal immigration. And because the government is prosecuting parents in the criminal justice system, their children are separated from them and there is little clarity on the process for families to reunite. Past administrations usually referred families crossing the border to immigration courts.

Department of Homeland Security spokesman Jonathan Hoffman said that nearly 2,000 children have been separated from their parents and confined to holding facilities, from mid-April to the end of May, according to CNN.

Melania's official statement echoed her husband's words over the weekend but in a less inflammatory manner. Trump tweeted Saturday that "Democrats can fix their forced family breakup at the Border by working with Republicans on new legislation, for a chance! This is why we need more Republicans elected in November."

It's a typical line for the president. He enacts a disastrous or revokes a vital policy and then blames Democrats, who control neither the White House, the House nor the Senate.

Trump doubled down on this sentiment, denying all responsibility from his administration Sunday night by saying, "The Democrats should get together with their Republican counterparts and work something out on Border Security & Safety. Don’t wait until after the election because you are going to lose!"

Then, in an unequivocal tweet Monday morning, Trump stated, "It is the Democrats fault for being weak and ineffective with Border Security and Crime."

Given Trump's comments, it brings some context to Melania's otherwise vague statement. When she references "both sides of the aisle," she's amplifying the president's justification for a policy that separates children from their parents, blaming Democrats who refuse to fund Trump's border wall in exchange for ending this practice. Here, Melania indirectly blames Democrats who aren't playing along with Trump's plan to use the families as political leverage, not the policy that her husband directly controls, in the soft language of encouraging "govern[ing] from the heart."

One person who pinpointed this hypocrisy was comedian Kathy Griffin. She tweeted Sunday: "F**k you, Melanie. You know damn well your husband can end this immediately...you feckless complicit piece of s**t."

Griffin's use of "Melanie," goes back to when Trump misspelled his own wife's name in a tweet and "feckless" recalls Samantha Bee's controversial insult to Ivanka Trump. And speaking of Ivanka, the self-proclaimed advocate for women and families loaded up her Instagram with Father's Day love for her husband Jared Kushner and the president over the weekend, while staying completely silent on the plight of immigrant fathers and children in families being torn apart at the border. Griffin's tweet will likely encourage a Trump response. It's already prompted conservative outlets into doing backflips to condemn the comedian and not the people in power who've instituted such a barbaric policy. Griffin was widely attacked for posing with a fake severed head of the president in 2017. She was fired, received death threats and was investigated by the government. Griffin initially retreated from the public after apologizing for the photo, but now back on tour, the comedian has since said she's not sorry.

Melania's mischaracterization of what's happening — that "both sides" are responsible and have the power to change it — supports Trump and allows his administration to continue to lie and deflect accountability for a policy they created and have the power to stop. Meanwhile, thousands of families and children are in limbo, being used as political leverage by the president and his team to coerce the Democrats into funding his border wall.

And Melania saying that she "hates to see children separated from their families" is hollow and meaningless if she takes no issue with her husband's policy of ripping children from the arms of their parents. "Governs with a heart" could not be further from the United States' current reality.

The harmful effects of Trump-era policies

Trump's presidency has damaged lives. Immigrant children separated from their parents at the border are now top of the list.