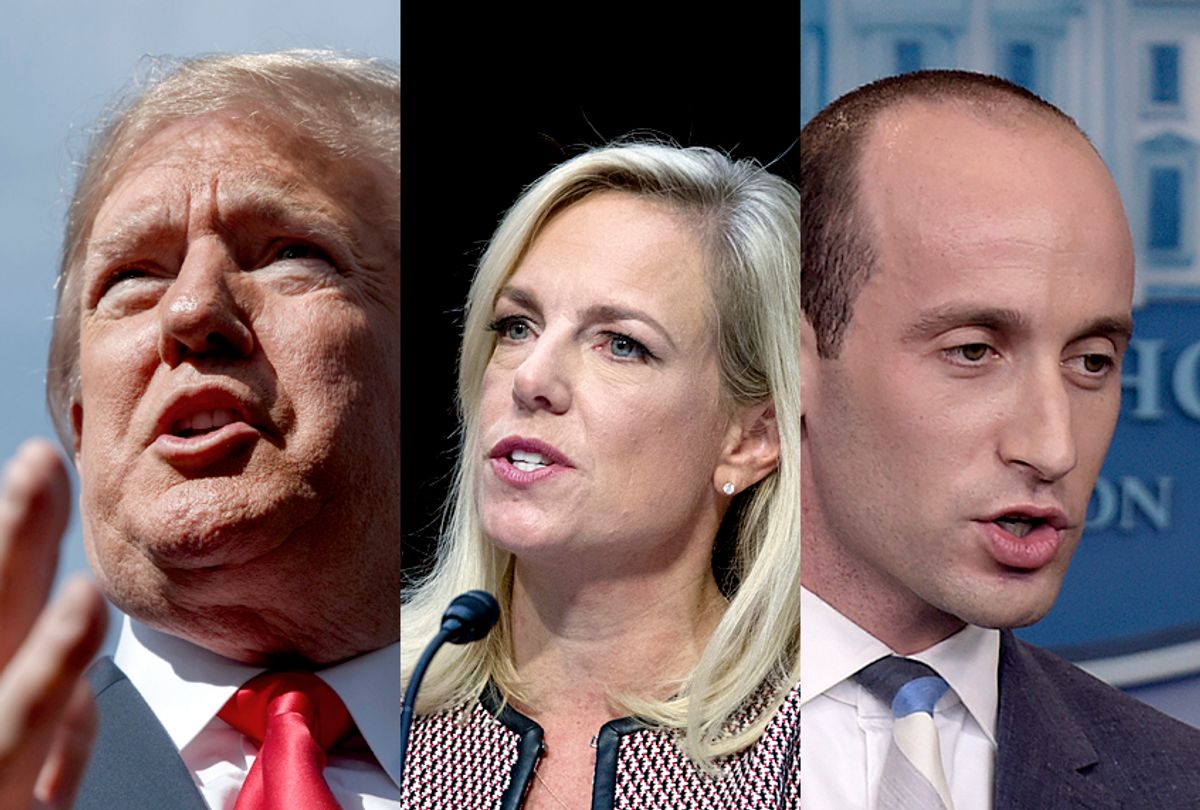 President Donald Trump's White House is lying about their policy of separating immigrant children from their families in the hope that doing so will stave off the roiling political crisis surrounding that issue, but it's only served to stir up further controversy.

The policy was demonstrated on Sunday by a pair of tweets from Secretary of Homeland Security Kirstjen Nielsen.

Nielsen's statement about children not being separated unless "the adult has broken a law" is key here. While past presidents did not consider undocumented immigrants seeking asylum to be law-breakers, at least in the sense that they qualified to have their children taken away from them, the Trump administration has decided to view them that way.

Nielsen also took to the podium on Monday morning to tacitly admit that the policy is in place but claimed that she is only following the law and that this is not Trump administration policy, once again ignoring the fact that the reason children are being separated from their parents is because the Trump administration has chosen to interpret the law in a way that previous presidents have not.

"We do not have the luxury of pretending that all individuals coming to this country as a family unit are in fact a family. We have to do our job, we will not apologize for doing our job, we have sworn to do this job," Nielsen told reporters.

She also insisted that the media should not be believed in its concerns about how the children are being treated.

While Nielsen has attempted to use artful dodges to avoid responsibility for Trump's unpopular policy, the president himself has posted tweets that try to blame Democrats (a tactic he also employed on Friday), even though the current policy was pushed into place by anti-immigration hardliners like senior policy adviser Stephen Miller, according to The New York Times. Another tweet tacitly admits that Trump's administration is behind the new policy but characterizes it as necessary because "some of the worst criminals on earth" are, according to the president, using their own children to get into the country.

Just to be clear: When Trump claims that the policy of separating immigrant children from their families is the result of Democratic laws that can be changed with a bipartisan effort, he is lying. This was confirmed, among other places, by the following statement at the Department of Homeland Security's Fact Sheet for the "Zero Tolerance Immigration Prosecutions - Families" program:

Children whose parents are referred for prosecution will be placed with the Department of Health and Human Services (HHS), Office of Refugee Resettlement (ORR).

So because the Trump administration is facing some negative political coverage, they are misleading the public anyway in the hope that they can dodge responsibility.

Of course, one interpretation of the argument that Democrats need to "fix the law" is that the Trump administration is essentially holding the immigrant children hostage in order to compel Democrats to agree to stricter anti-immigration legislation. The underlying argument here would be that Republicans wouldn't need to do this if Democrats helped them tighten up the border and that, if Democrats refuse to be coerced, Republicans aren't to blame for the inhumane policy.

Senior White House adviser Kellyanne Conway staunchly denied that this was the case during an interview with NBC's "Meet the Press" on Sunday.

"I certainly don't want anybody to use these kids as leverage," Conway told NBC News, adding that she "very forcefully" objects to the implication that that's what they're doing. Earlier during the interview, Conway said that "as a mother, as a Catholic, as somebody who has a conscience . . . I will tell you that nobody likes this policy."

That last statement is also untrue, as Miller, Chief of Staff John F. Kelly and Homeland Security Secretary Kirstjen Nielsen are all known to support the policy of taking immigrant children away from their parents, according to The Washington Post. In that same report, a White House official admitted that part of the reason the policy was being implemented was that the Trump administration believes it could be used to force Democrats into accepting a deal.

"If they aren’t going to cooperate, we are going to look to utilize the laws as hard as we can," the official told the Post.

On Monday morning, when CBS News' Gayle King spoke with Manny Padilla, the Chief of the Rio Grande Valley sector of Customs and Border Protection, Padilla defended the Trump administration's policy and insinuated that undocumented immigrants who had personally told King about their traumatizing experiences were lying.

"It's a very complex situation. When you have high levels of activity and a lack of resources — personnel, technology and infrastructure — it creates kind of this chaotic environment," Padilla told King in order to paint a stark picture of conditions at the border. He also described a situation in which a patrol vehicle was rolled over recently.

When King asked Padilla if he supported Trump's policy, he affirmed that he did.

"I do agree that we have to do something," Padilla told King. "We created this situation by not doing anything. So what happens with zero tolerance is we were exempting a group, a population, from the law. And what happens when you do that it creates a vacuum, it creates a draw for a certain group of people that rises to trends that becomes a crisis."

After King told Padilla about stories that parents were told their children were being taken to get a bath and then they never heard from them again, Padilla insisted that "very respectfully, Miss Gayle, that's misinformation that is out there." He went on to claim that "every family member gets a sheet with information to keep track of their child, to get information where that child is."

At that point, King interjected to note that she had personally spoken with "parent after parent" who told her that their children had been taken away and that they weren't informed where their child was going or how they could communicate with them.

When King asked if that meant Padilla was implying she was being misinformed by the parents, Padilla affirmed that this was what he was arguing.

In similar news, on Sunday CBS News correspondent David Begnaud reported that he was not allowed to film inside one of the detention facilities for children in McAllen, Texas.

"The thought that any state would seek to deter parents by inflicting such abuse on children is unconscionable. I call on the United States to immediately end the practice of forcible separation of these children."